Fantasia 2020 Review: BLEED WITH ME, A Nightmare Slowly Blooms In A Cabin In The Woods 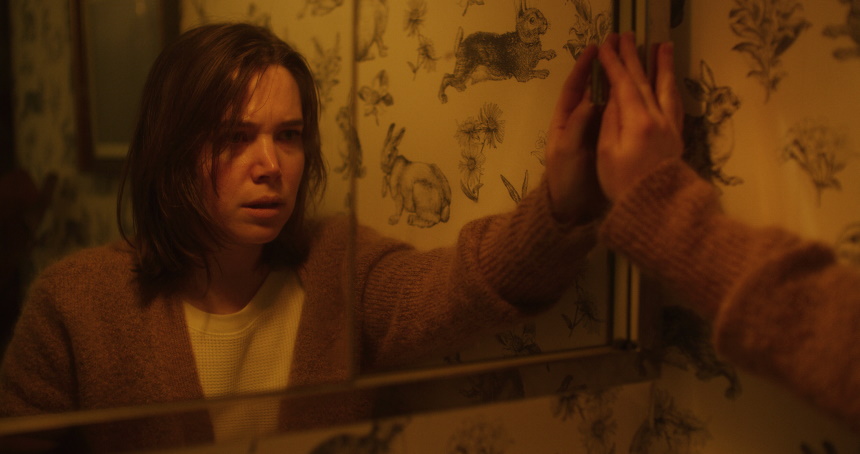 A young woman's sanity slow slips away on a woodsy getaway with friends in Bleed With Me, the debut feature from writer/director Amelia Moses.

Rowan (Lee Marshall) is the quiet type, not one to make a fuss or inject herself into situations that don't concern her, but when she's invited to join her best friend Emily (Lauren Beatty) and her boyfriend Brendan (Aris Tyros) on a outing to a remote cabin, she says yes, but it's not all rest and relaxation when things start going wrong. Within hours Rowan's anxieties begin taking hold and in order to cope with her feeling like an interloper, she begins to drink pretty heavily, leading to numerous unnecessary confrontations and the bonds of friendship are tested.

Emily tries to comfort her friend, but wires get crossed and before long the two are engaged in subtle psychic warfare with Brendan attempting to play the role of go-between. Rowan's sleep is interrupted by visions of a dark, sinister figure who seems to mean her harm, but she cannot quite figure out how or why. She wakes up each morning with a new small slash on her arm, but she doesn't remember how she got it. Is it her shadowy nightly visitor? Is this visitor someone she already knows? Or is it something deep within her trying to force its way out. As Emily grows weary of Rowan's seething hysteria, the two find their friendship moving beyond strained to antagony. Could Emily be Rowan's villain? Is it Brendan? Or is there no villain at all...

Amelia Moses uses her debut feature to explore female relationships, impostor syndrome, jealousy, mental illness, self-harm, and more in Bleed With Me, a bold strategy that results in an atmospheric thriller in which the audience never quite knows who to trust. Smart use of a limited budget requires about ninety percent of the action to take place in the cabin, and the team makes excellent use on this one location, making familiar sights look more and more menacing as the film progresses.

From the opening monotone strains on the soundtrack informing the audience that something's not quite right with Rowan, Bleed With Me uses all of the cinematic tools at its disposal to bolster Moses' script and her actors' impressive performances. Cinematographer René Arseneau's work is particularly arresting, as he uses his camera as a tool to subtly convey Rowan's deteriorating mental state. From the slightly off balance steadicam shots that grow shakier as the film progresses, to the hazy visions of nightmare beasts plaguing Rowan, the camera's eye mimics Rowan's descent into a paranoid nightmare from which she's having trouble escaping.

Partly the story of a woman slowly losing control, with a touch of Who's Afraid of Virginia Woolf?, Bleed With Me is a fascinating look at three characters on the edge of sanity. The only difference between them is their own resolve and fortitude that keeps each of them sane a little bit longer. Rowan runs tragically short on coping skills, but that doesn't mean she's necessarily a victim, perhaps she's been the villain all along. Moses's script leaves certain events up for interpretation in a way that would typically annoy me, but I think the various potential explanations are all interesting, so in this case it definitely works in the film's favor.

Bleed With Me is an impressive debut feature that deftly avoids the typical dangers from first time directors. By containing the story both physically to one location, and storywise to three characters, Moses and her cast, including the very impressive Lee Marshall, are able to focus on the human core of an ultimately tragic tale.

More about Bleed With Me