Blu-ray Review: THE COMFORT OF STRANGERS, the Sickness of Bad Love

Blu-ray Review: The Comfort of Strangers 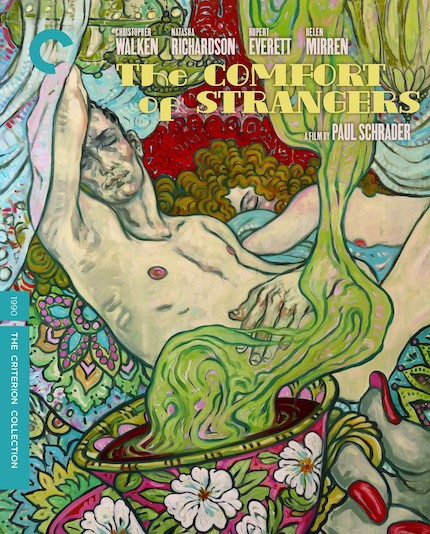 There are plenty of disturbing films in the world. One of them is a 1990 release, directed by Paul Schrader (First Reformed, Cat People, American Gigolo, and writer closely tied to Martin Scosese with Taxi Driver, Raging Bull, The Last Temptation of Christ) and written by Harold Pinter (screenwriter, playwright, and the 2005 Nobel Laureate for Literature) in an adaptation of the book by Ian McEwan.

The film in question is The Comfort of Strangers, the latest disturbing film I'm trying to wrap my head around, and it's out this week on Blu-ray and DVD from the Criterion Collection.

Mary (Natasha Richardson, Gothic, The White Countess) and Colin (Rupert Everett, Cemetery Man, The Importance of Being Earnest) are a well-bred couple that seemingly have no issues in life, save for their failing romance. They leave her two children at home in England and travel to Venice together (for the second time) in order to rekindle their feelings for one another.

We are shown that the couple has issues that will probably not be resolved, especially due to Colin's neglect in several scenes. He doesn't look at her when they discuss their problems, and more importantly, he doesn't even especially protect her in a foreign country.

It's this foreignness that Schrader and maestro cinematographer Dante Spinotti (The Insider, Manhunter, The Last of the Mohicans) brings to the forefront in terms of music (by Angelo Badalamenti, most well-known for his work with David Lynch), and the focus on the more Arabesque architecture in Venice, as well as the production design.

Anyway, Mary and Colin aren't in Venice long before they're lost in the labyrinthian pathways that the Italian, water-locked city is known for (watch The Comfort of Strangers with Don't Look Now for an amazing double feature).

Enter Robert (Christopher Walken, The Deer Hunter, The Dead Zone, The Prophecy), a British, bar owner and ex-pat living in Venice with a penchant for white double-breasted suits. He's domineering and has a steely-eyed gazed to match, as well as a wife who can't leave their home/castle.

Robert finds Mary and Colin lost, searching for a restaurant, but brings them to his bar, which strangely finds the cook out sick, if there ever was one in the first place. He plies them with wine while telling them word-salad-stories about his father and his childhood.

Innocent, polite, and easily corrupted, Mary and Colin stumble through the night and end up sleeping near a canal. They somehow manage to find a cafe the next morning, only to be immediately found by Robert and brought back to his castle abode for sleep.

Well, they SLEEP. All day. When they wake, the couple is without their clothes and only one dressing gown/caftan is to be found. Mary ventures out of their palatial bedroom and is greeted by Robert's wife Caroline (Helen Mirren, The Queen, Caligula, Gosford Park), who admits she had the clothes cleaned... but also tells Mary that she watched them as they slept in a horrifying stranger danger comment.

Somehow, the couple stays for dinner despite this violation of privacy.

Kids, there are so many warnings when things are about to go wrong. Being polite can lead to some really, really bad things. Be smart, okay? Don't be like Mary and Colin.

Anyway, Robert returns and after saying some pretty awful things at dinner and afterwards, punches Colin in the stomach because he dared to disagree. Furthermore, Caroline whispers to him that she's trapped as the couple says goodbye.

Because the relationship between Mary and Colin is sick, it's open for further decay. Without spoiling too much, the couple comes together in terms of physicality, fantasies, and plans. But nothing will ever be the same, and there will be dire consequences for everyone involved.

Although The Comfort of Strangers is relatively recent in terms of Criterion (30 years, I know), this transfer is basically flawless. The new 4K digital transfer was supervised by Spinotti himself, and it shows. It's beautiful. Sound is also wonderful.

Even the new cover, a painting of actor Rupert Everett as Colin, is evocative of the film, with strokes of yellow-green, a sickly hue, pervading and taking over his pose as a sleeping god. Let's check out the rest of the:

The interviews are great, with Schrader surprisingly admitting that if he couldn't pull off The Comfort of Strangers today because he doesn't "have the chops." It's rare that you'll catch a filmmaker so candid. I also loved hearing from Spinotti, whose work is transcendent. There's also a funny interview with Walken and the essay from critic Maitland McDonagh is informative and thorough. (More from her, please!)

If you'd like to read more on The Comfort of Strangers (or add it to your home movie library), visit Criterion's page for the film here.

The Comfort of Strangers