Review: THE POOL Bites the Big One 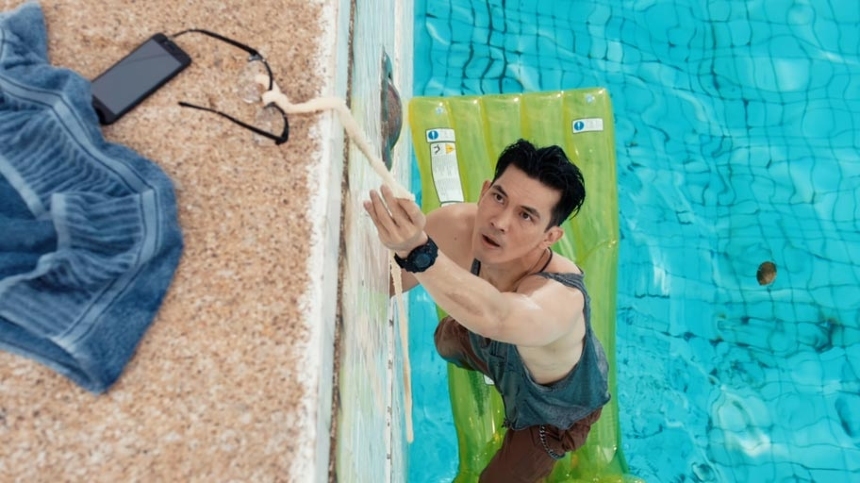 Watching movies at film festivals (or on streaming services) can be a very strange experience.

The Pool
The film is now streaming on Shudder.

In the opening scene, a man wakes up in an empty swimming pool with a crocodile noshing on his leg.

Having declared its intentions up front, the film rewinds to how Day (Teeradej Wongpuapan) ended up in such a perilous situation. Trainer Day and his talented dog have been hired to perform in a commercial that is shot in and around a large public pool in Thailand. Some 20 feet deep, the pool has been closed permanently to the public.

After the night shoot concludes, Day is lounging on the pool on an inflatable raft, exhausted, when his friend, a crew member, warns him that he has begun draining the pool and that Day needs to get out soon. Still, the pool will take hours to drain, it's a lovely sunny day, Day is worn out from the night before, his friend departs, and Day falls asleep.

When he awakens some time later, the pool has drained to the point that Day cannot get out on his own. The pool has no ladders, no one is nearby, no one will help. Also, he left his faithful dog chained to the pool's diving platform. Also, a crocodile has escaped from captivity and is said to be lurking in the vicinity. Also, no one knows where he is, and, of course, he left his mobile phone on the pool's deck.

We can easily conclude that Day is an idiot. I mean, who falls asleep in the middle of a huge, deep, draining pool, with no one else around? B-movie lovers, such as myself, are inclined to make allowance for dim people who make bad decisions, however, and Day's true, admirable qualities come to the surface when his girlfriend Koi (Ratnamon Ratchiratham) figures out where he must be and comes to join him.

What happens from there forms the core of the movie, as Day and Koi fight to survive in a battle against a CGI crocodile from hell. (Spoiler: Animal lovers need to be advised that the faithful barking dog will meet a terrible fate. It's CGI, but still...)

To say the entire film is a series of risible, ridiculous contrivances is stating the obvious.
Director and writer Ping Lumprapleong stages the action with finesse, though, and the tight pace enlivens the tension, even when the tension is prolonged far longer than warranted.

The solemn, grim approach also clashes with the wacky premise to a large degree. Are we really supposed to take this all seriously? I became infuriated early on, for example, at a flurry of situations that were introduced as possible means of escape for Day, knowing full well that he would be trapped in that pool for the full 90 minutes of the film's running time.

On the other hand, it's a cheerfully clever, if mean-spirited, thriller. Help yourself, if it ever plays near you. *

(* Advisory no longer needed, since it's now streaming on Shudder! Will wonders of the modern age never cease ... )

Originally published in slightly different form when the film enjoyed its Texas premiere at Fantastic Fest in Austin, Texas, in September 2019. The audience in attendance appeared to enjoy the movie much more than I did. Now, more than ever, your mileage may vary.

Do you feel this content is inappropriate or infringes upon your rights? Click here to report it, or see our DMCA policy.
Ping LumpraploengRatnamon RatchirathamShudderThailandTheeradej Wongpuapan