Ard Vijn
Editor, Europe; Rotterdam, The Netherlands (@ardvark23)
Tweet Post Submit
With streaming being the major platform, DVD and Blu-ray home releases have become a declining market. There will always be collectors though, and distributors willing to cater to them. Countries like France and Germany still release many stunners these days, and here is another one, with a surprising main subject: Norman Jewison's 1975 anti-corporation science fiction sports thriller Rollerball. German distributor Capelight has given the film a surprisingly lavish release, one which I (as a fan of the film) can only approve of.

It's still available here-and-there but is pretty limited, with only 3000 of these having been released last April. Here is a gallery of shots. Click on the edge of the pictures to scroll through them, or at the center of each to see a bigger version. 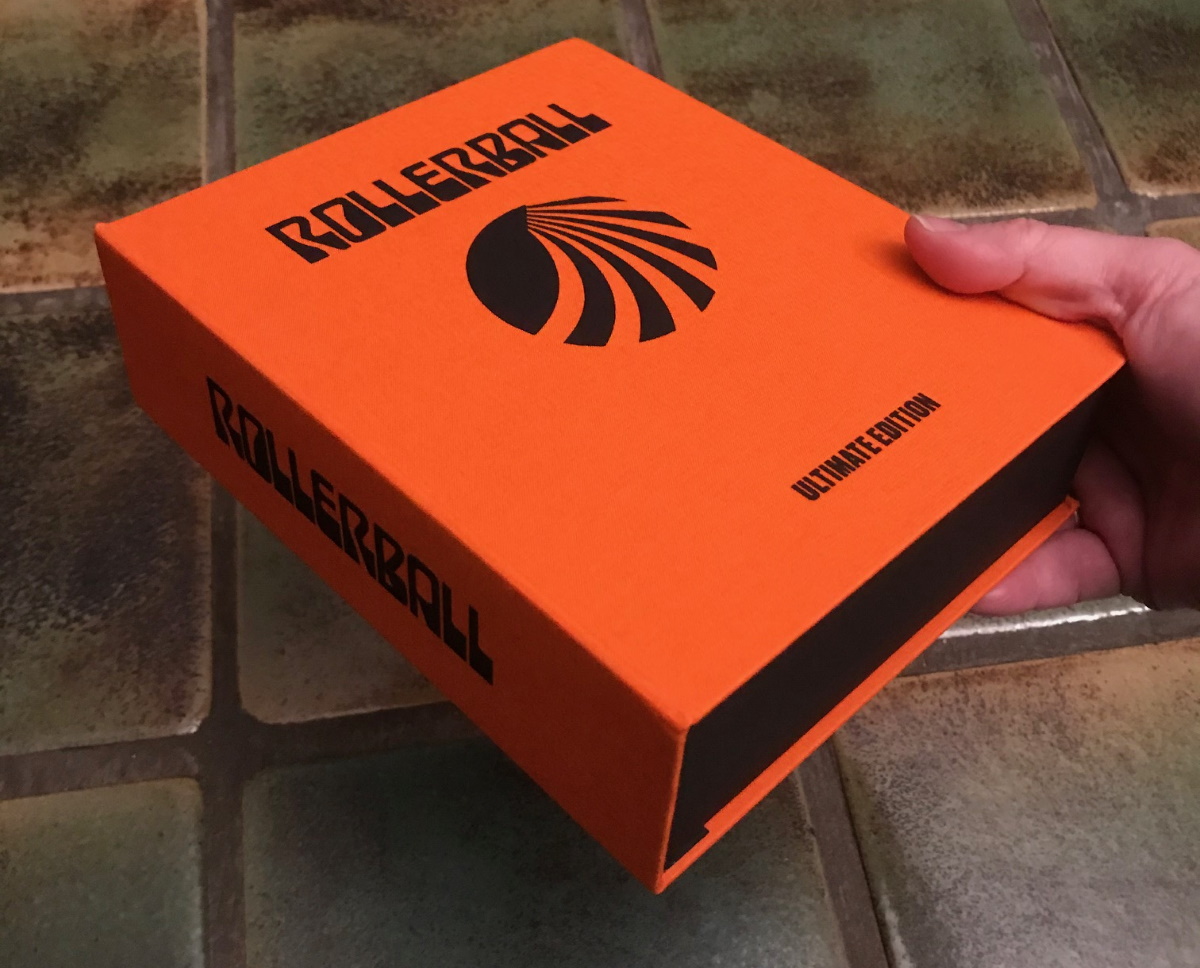 Here it is, a big orange box of sturdy carboard with textile covering. And its lid closes with magnets. Oooh... 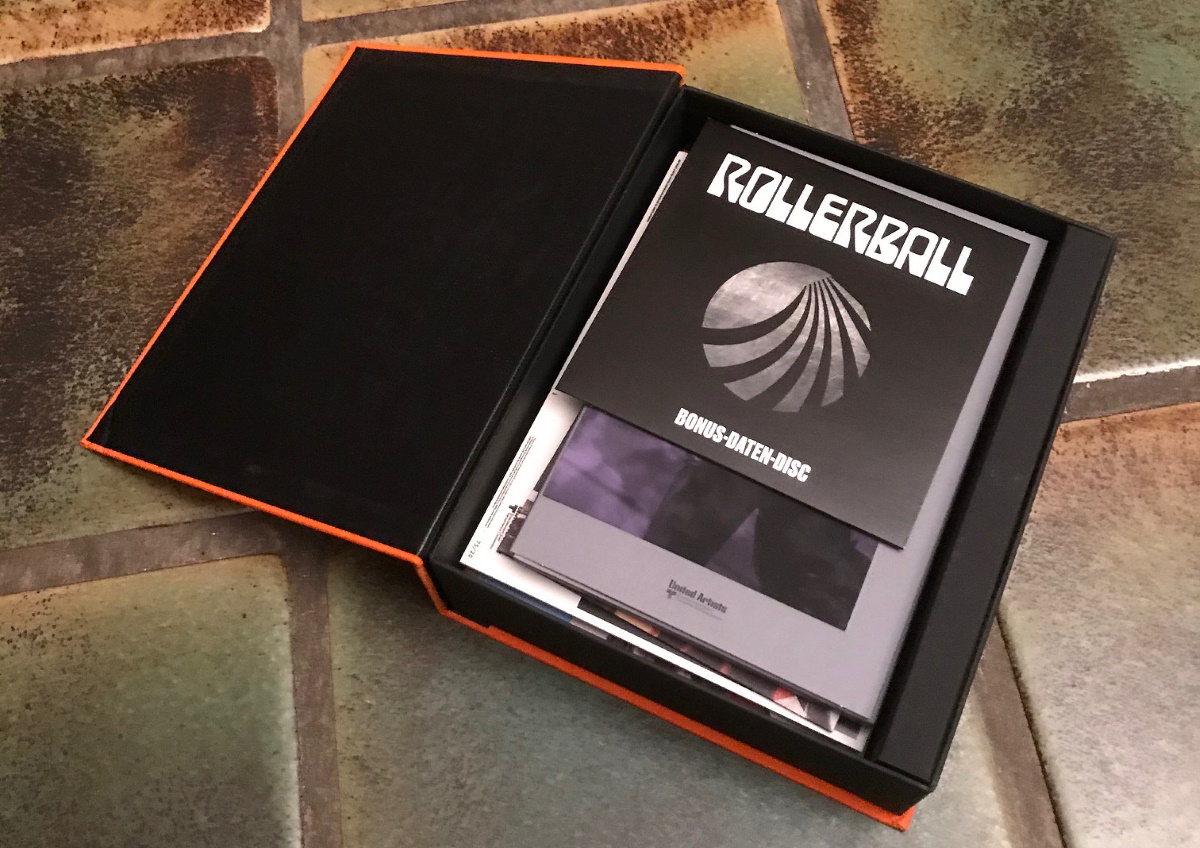 Opening the box shows there's not much air in there. 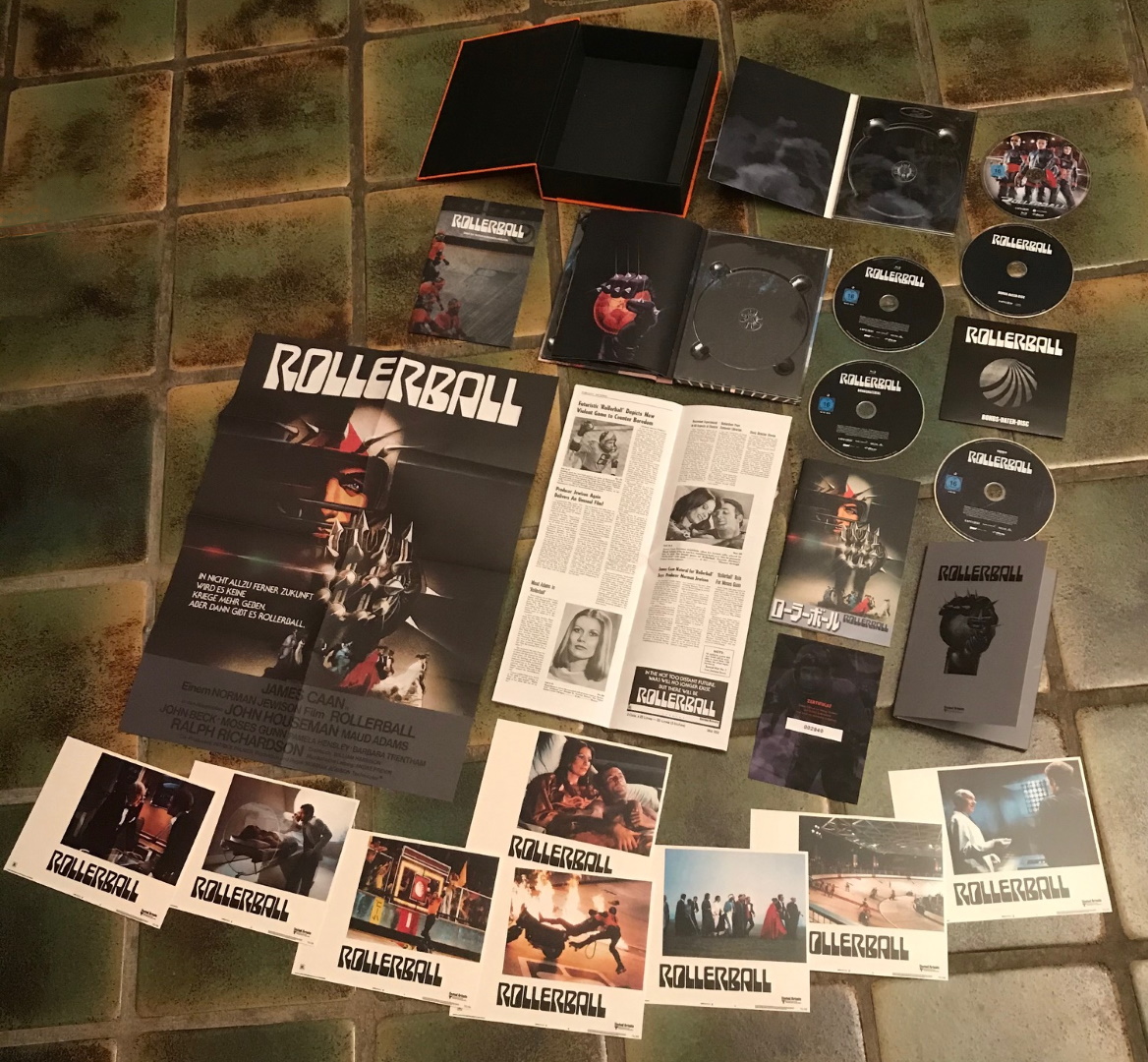 Here we get the contents, all spread out. There are five discs:
- the 1975 film on Blu-ray,
- the 1975 film on 4K UHD,
- a bonus Blu-ray full of documentaries, interviews, and different 8-mm versions of the film,
- a Blu-ray of the 2002 Rollerball remake/re-imagining/prequel kinda,
- a data CD-rom full of international press materials (damn, now I need to find a computer which still has a disc-player attached...).

There are also lobby cards, a folded film poster, printed press materials, a booklet on the film's new 4K restoration, and the main two discs are housed in a mediabook. Whoa... 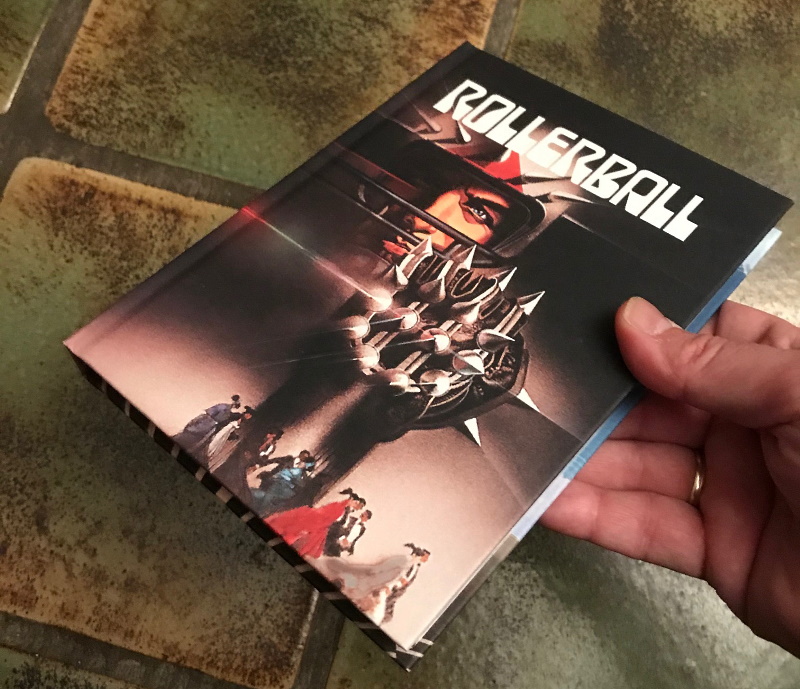 A closer look at the mediabook which houses the Blu-rays and the 4k UHD discs of the 1975 film. Here's the front.

The mediabook is 24 pages and in German. 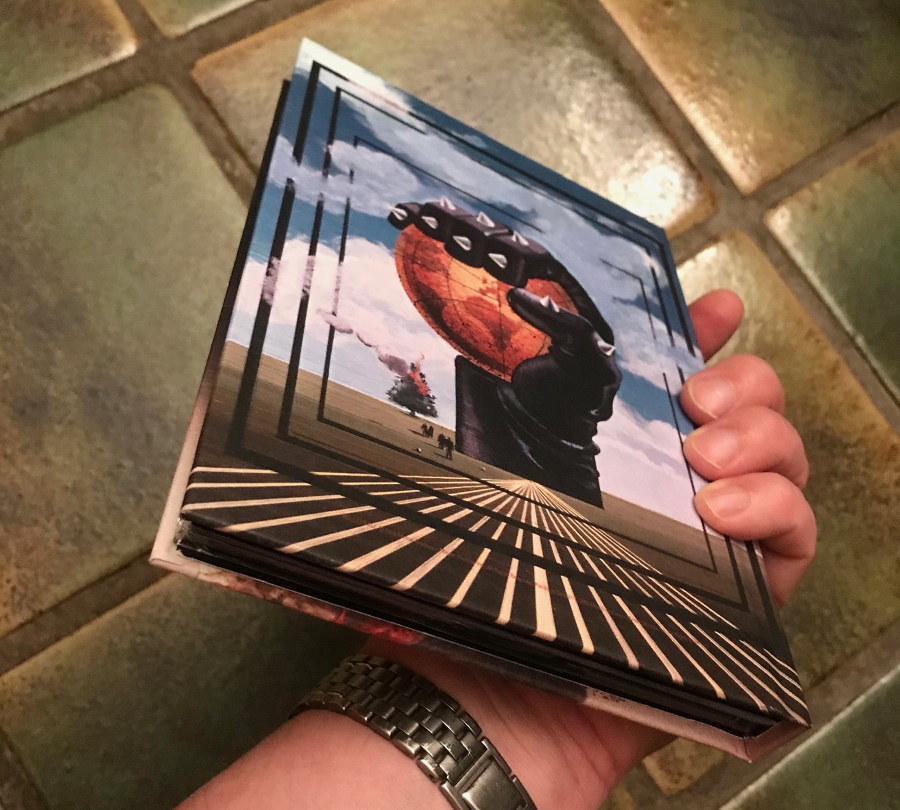 The back of the mediabook. 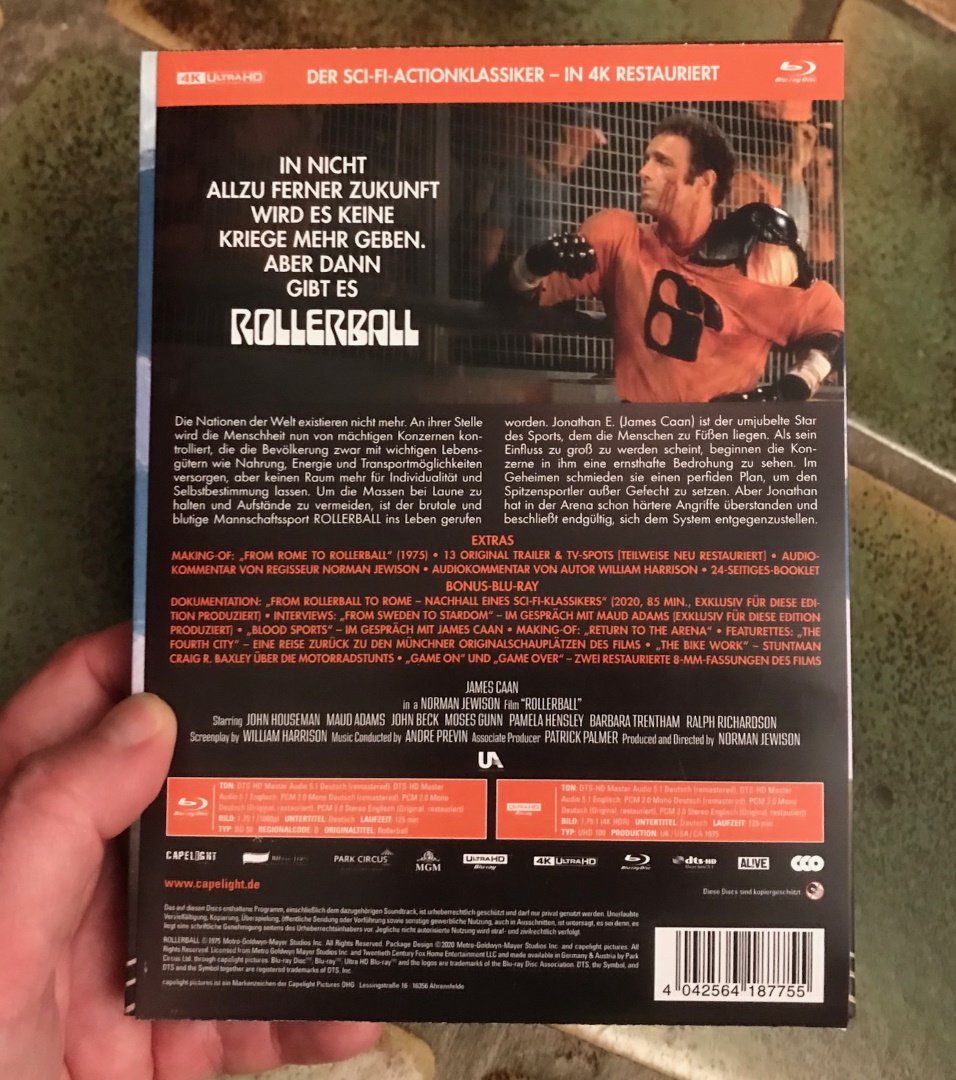 The slipcover of the mediabook, detailing its contents. 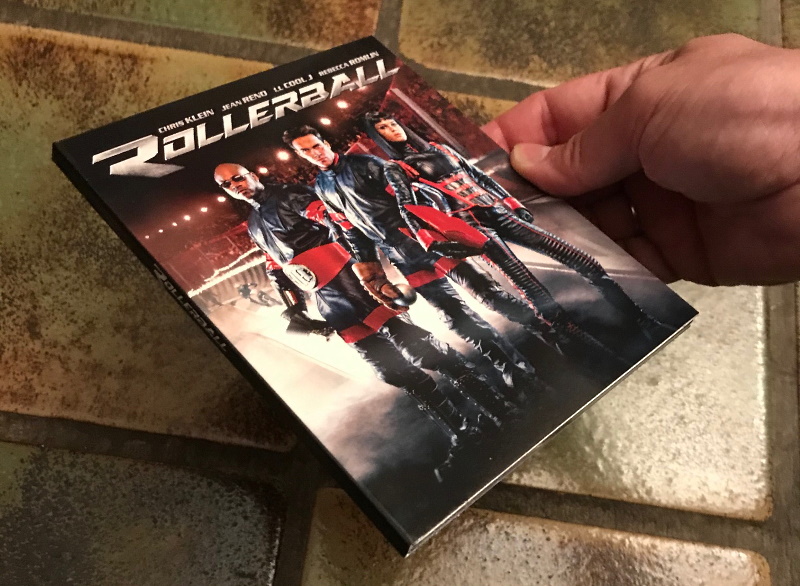 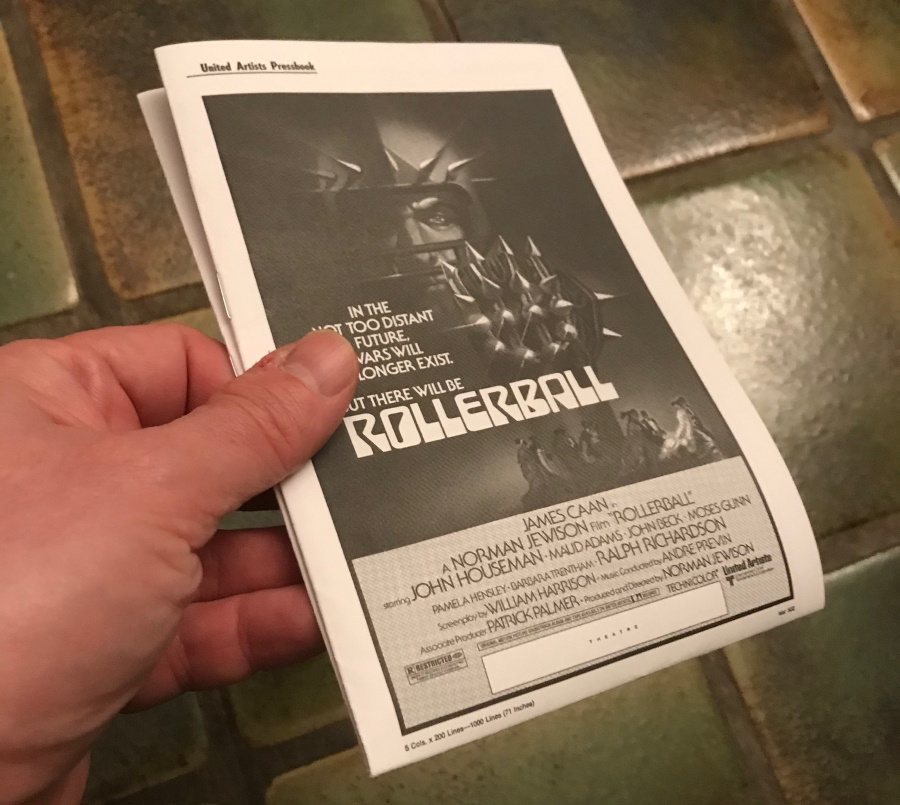 A copy of the press release from the original premiere. 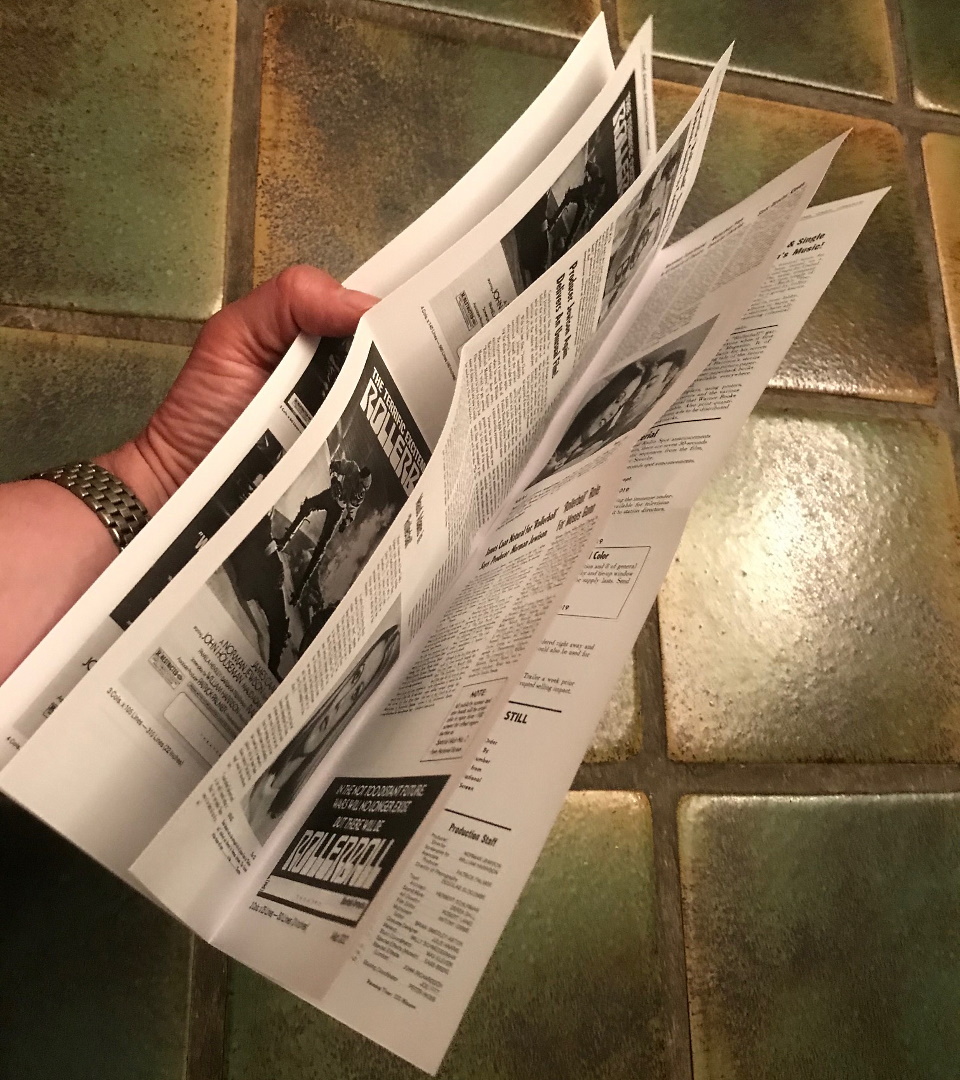 It folds open like a newspaper and there is plenty of interesting stuff inside. It is in its original language (English). 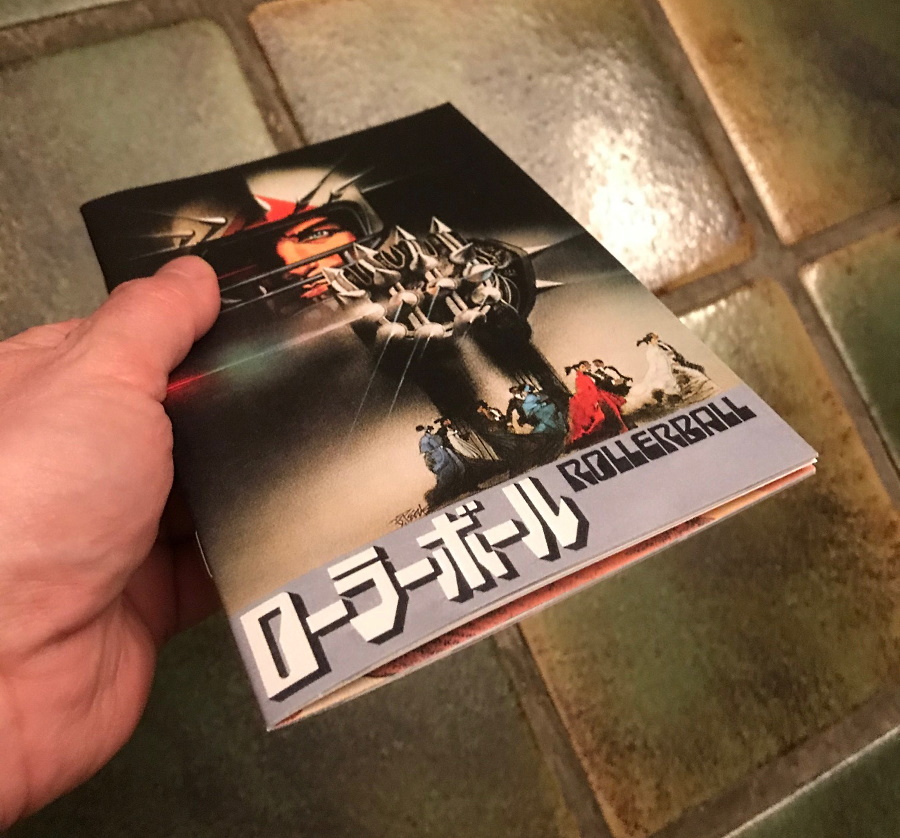 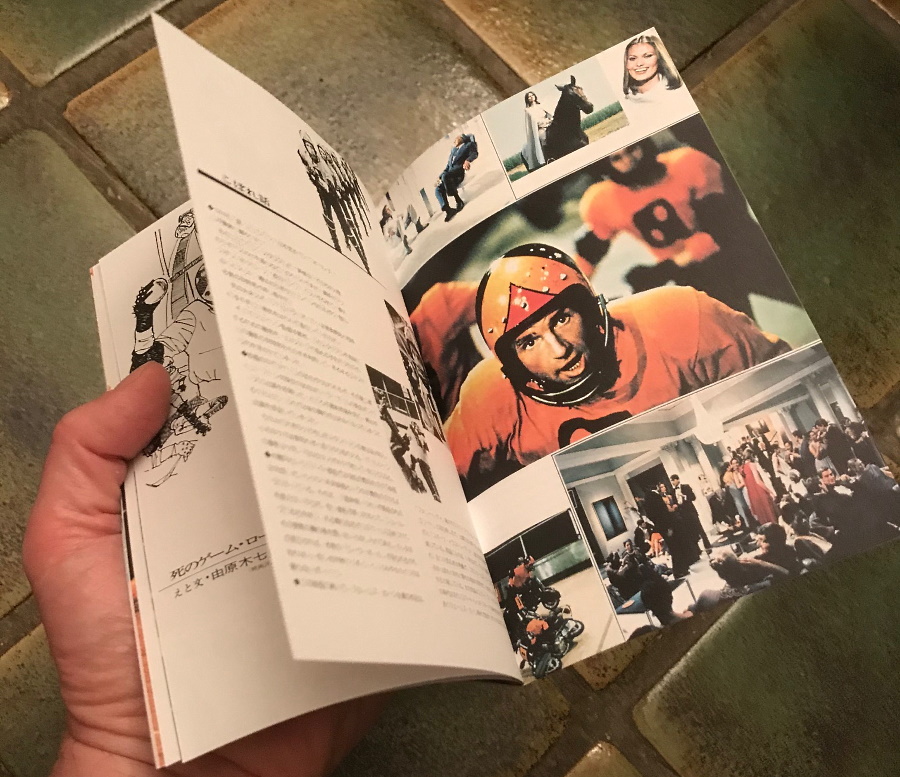 I love extras like these, even though I can't read Japanese. 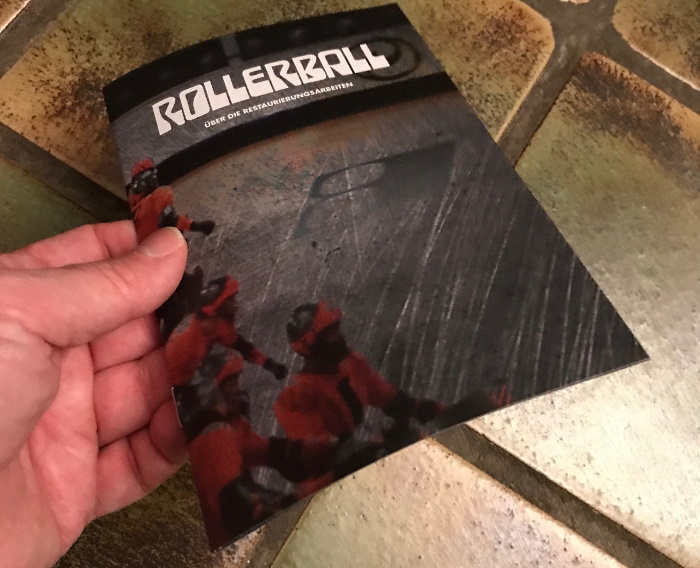 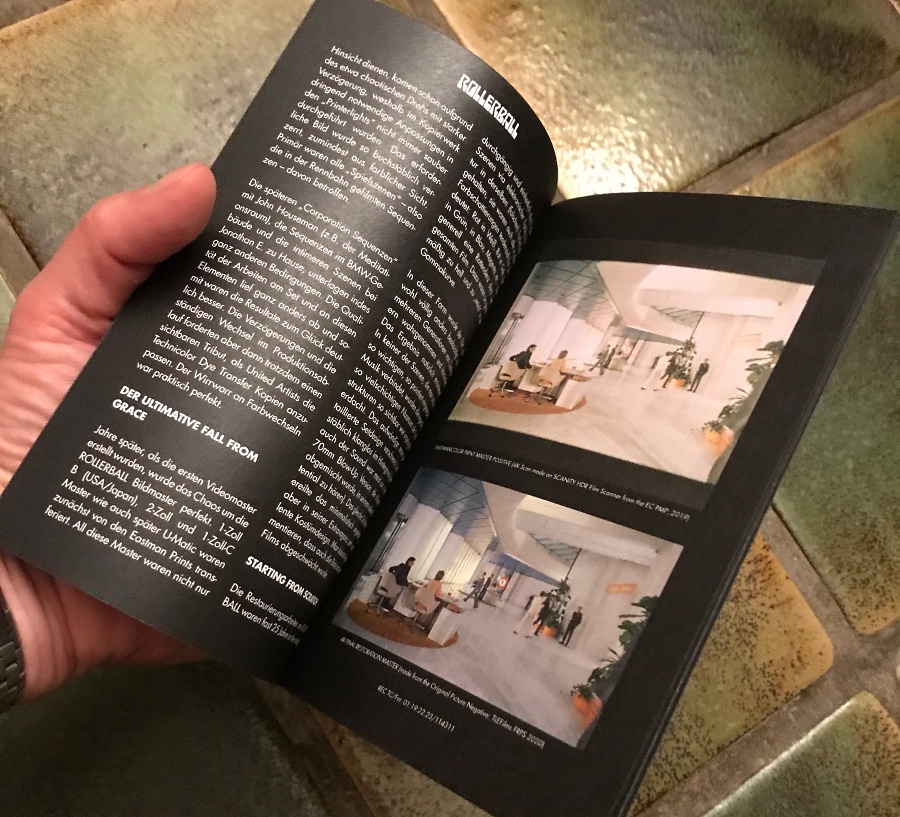 It's in German, and only a few pages, but it does describe in detail the different sources which were available and the many hurdles the restoration team had to jump over. 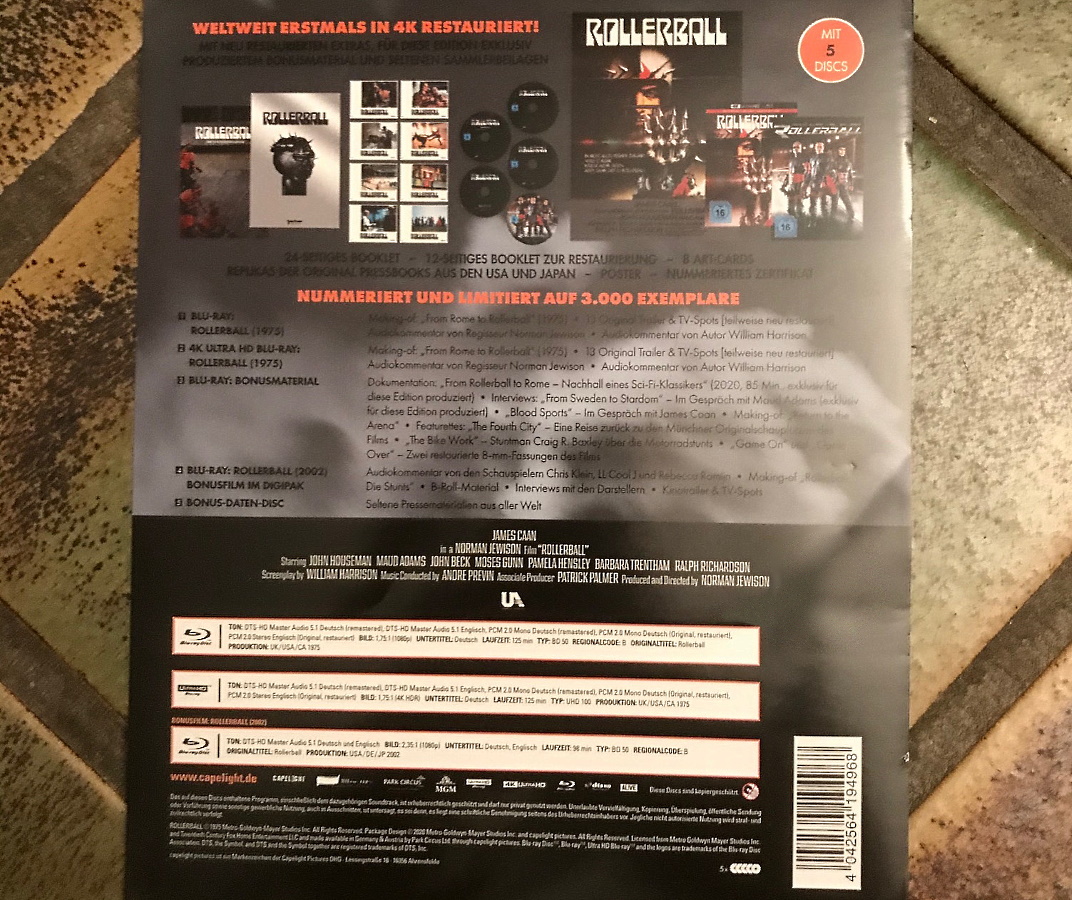 The flap on the back of the box, detailing what's inside. 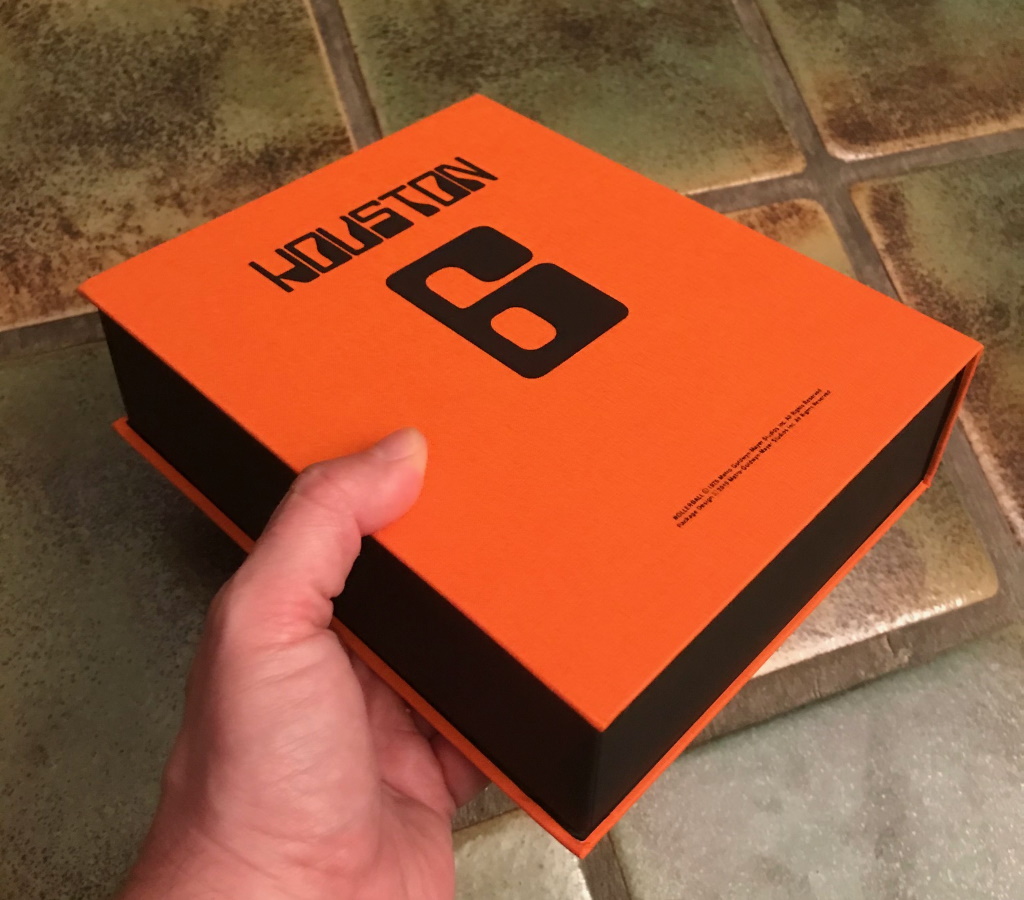 The real back of the box, showing Jonathan's shirt number. An excellent release, which I applaud!