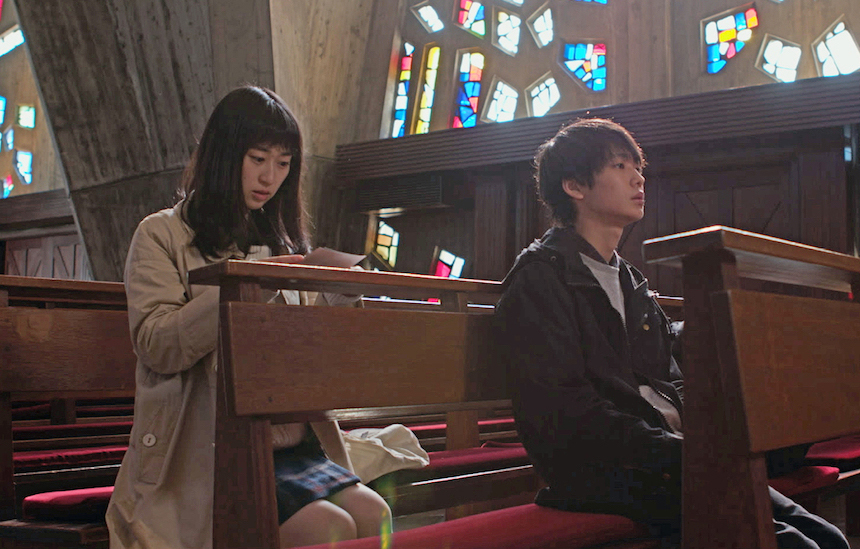 The Great Eastern Japan Earthquake of 11th of March 2011, which took the lives of 15,000, seared deeply into the collective Japanese psyche. There have been films dealing with the aftermath of the disaster, manifested into popular culture in myriad of ways since then. But, less than a decade after the incident that affected millions of lives, its full psychological impact is still to be seen.

As a film student, Tsuboi Taku worked on the set of Kurosawa Kiyoshi's Journey to the Shore, as a second AD. Now he makes a strong debut feature with Sacrifice, an understated, atmospheric thriller/murder mystery concerning the aftermath of such a monumental tragedy and its effects on young people. Here he shows a great deal of potential as a writer/director.

The devastating earthquake and ensuing Tsunami happened 7 years ago when Midori (Gomi Michiko) was in middle school. She was known as Ap, her Sanskrit name back then. She belonged to a cult called Sacred Tide where its members believed a great tidal wave would purify the earth once again. She was a special child because of her ability to predict the future, as she did about the Great Eastern Japan Earthquake. But she escaped from the cult, in the hopes to have a normal life.

Now Midori is a college student and there's serial cat killer on the loose near the campus. The killer also claimed the life of Sora, her friend from her cult days. Toko (Handa Miki), an inquisitive fellow student, is determined to track down the killer and she suspects a quiet outcast named Okita (Aoki Yuzu) after she finds photos of gruesome cat killings in his possession. Toko is dating a good-natured senior Masaya (Fujita Kosuke), who is busy job hunting.

The cult is disbanded now but it morphed into a black-ops style private military firm, actively recruiting students on campus and scaring the general populace with their camo outfit and close to the skin haircuts. They want Midori back for her clairvoyant ability.

After Okita rescues Midori from threats made by a military man, they team up to find the killer. Okita suspects the cat killings are related to the date of the disaster, 3/11, that the killings won't stop until there are 311 victims that it is somewhat ritualistic in nature.

Reflecting the mood of the nation ailing from economic downturn and natural disasters, Sacrifice touches upon the collective anxiety of the young generation: students are faced with grim prospects of depressed job market after they graduate. They openly joke about their lack of interpersonal skills at job interviews. Some find the private military firm an attractive alternative even though the news of captured Japanese solders overseas constantly blaring on TV.

The film's visual style - large public places, an abandoned factory, the use of wide shots and effective framing, all for the benefit of generating eerie and atmospheric tone - are reminiscent of seasoned contemporaries, such as Kurosawa Kiyoshi, Tsukamoto Shinya and Ishii Gakuryu, just to name a few. Sometimes the run-on exposition heavy dialog feels a little too much for the young cast to handle and wish he could've relied on his visuals to do the talking. But overall, Sacrifice is a brooding examination of a generation under siege by the catastrophe which they still struggle to understand its full impact.

Do you feel this content is inappropriate or infringes upon your rights? Click here to report it, or see our DMCA policy.
Aoki YuzuGomi MichikoHanda MikiJapanJapan Cuts 2020Tsuboi Taku