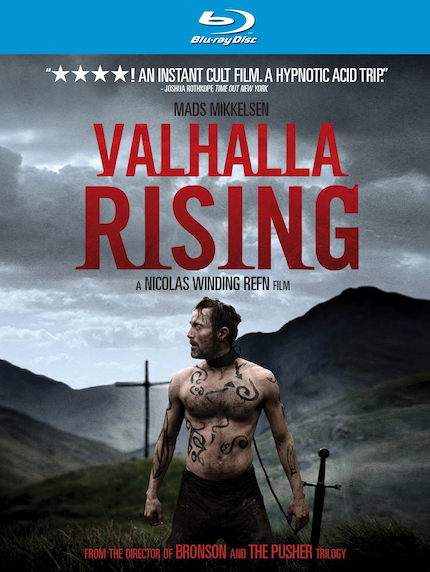 A good amount of us Screen Anarchists are Nicolas Winding Refn (The Neon Demon, Bronson, the Pusher trilogy, Drive) fans. If you were reading this site a decade ago (and in some cases, 11 years previous), you saw an insane amount of news and festival reviews for Valhalla Rising, including Todd's brilliant, original review here. (Todd also interviewed Refn about the film back in 2009 here.)

A recap: Mads Mikkelsen (Casino Royale, Hannibal, A Royal Affair) plays mute Viking "One Eye," a moniker given to him by the child who follows him around because everyone else is dead. WHY is everyone else dead? One Eye has dispatched them to Valhalla (or otherwise), of course! Stabbing, beheading, disembowling --- you name it, One Eye kills pretty effectively.

That's just what happens when you cage a fierce Viking warrior and force him to fight other Vikings or if you're a Scottish clansman fool enough to get close to him --- whether by accident or choice.

After One Eye escapes his captors, he and the child join up with some other Scottish warriors; these ones want to go to Jerusalem to fight for Christ. Well, too bad that doesn't happen, because they don't have a competent captain.

Instead of heading to the Middle East, they end up in North America, likely Canada, where they are beset by a cruel wilderness, as well as hostile natives. It doesn't end well.

Valhalla Rising is the kind of film that's more of an experience to behold; it's a nihilist masterpiece with a non-traditional structure laid out in six chapters and few words. It's not what happens, but how it happens, and how it's filmed, that matter here. I could detail everything, but that's still not going to give you the atmosphere of dread and hopelessness that Refn has created. If this sounds great to you (and hopefully it should!), watch it or give it a re-watch soon.

While both Canada and Europe have had their own Valhalla Rising Blu-ray releases, the film only recently came out here in America on that format. From what I've heard, both releases are better looking that this American version, especially the European release that's been out for a decade. (It also boasts a Refn commentary and "making of" featurette, in addition to the beautiful picture.)

While the colors are good on this release, there are plenty of scenes with thick fog that result in layered, halo-like artifacts. It's not awful, but enough to be annoying. It seems that the other releases have had better masters, which is a shame. The sound on this MPI release is good; I didn't detect anything awry.

In terms of special features, unfortunately, there are none. The theatrical IFC trailer is included, but if you watch it, it's almost funny; you can tell that it was made precisely for American audiences. Seemingly every sparse line of dialog is included in the trailer, as well as a good number of action sequences. There's also a traditional "movie guy" trailer voice over, which feels very out-of-place on a European film such as Valhalla Rising. Honestly, it's ridiculous.

While I won't go so far as to say that this is a butchered release, I will say that the film is a subtle masterpiece, and deserves much better than such a bare-bones existence in this country. I'm glad to have it in my collection in any case, but I'd realllllllllly love to see the film receive a worthy Blu-ray edition in this country some day, such as from Criterion or Arrow.

If you'd like to add Valhalla Rising to your home collection, you can purchase the North American Blu-ray wherever it's sold, such as Amazon, Wal-Mart, Best Buy, etc.