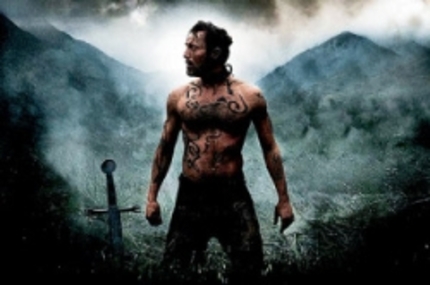 [My review of Valhalla Rising originally ran when the film premiered in Toronto but with it now screening at Action Fest I hereby present it to you again.]

You could say that the mark of a good film maker is that they give you want you want.  And if that is true then I suggest that the mark of a great film maker is that they give you what you want while also giving you something completely different.  And this is the case with Nicolas Winding Refn and Valhalla Rising. Now seven films into his career Refn continues ... not to change, exactly, but to continue finding new facets of himself and his work.

His long-discussed Viking project, Valhalla Rising has roughly the same relationship to a typical historical epic that Refn's lauded Pusher films have to The Godfather.  That is to say that it is a much more intimate, much more raw affair - a film that trades in technical gloss for the punch of brutal immediacy.  This is the part that we have come to expect from Refn, this is what we turn to him for.  The surprise in this case comes in the way that he weds the rawness to a sort of Terence Malick inspired lyricism, embracing a hypnotic approach to storytelling and editing that takes its cues not just from the film's mute lead character but - more importantly - from the harsh landscape that it explores.

Mads Mikkelsen stars as One Eye, a mute brute of a man enslaved and kept in a cage, brought out only to fight in brutal to-the-death unarmed combat for the entertainment and amusement of his masters, clan chieftans in the Scottish highlands.  But times are changing and things are not good for the clans.  Their old ways and old gods are under siege - literally, in this case, by Viking converts to Christianity who are spreading the gospel on the edge of a blade.  And when One Eye manages to make his escape - a brutal affair that leaves all the guards foolish enough to stand and fight him dead, dismembered and / or disembowelled - he, along with the young slave boy who tended him in his cage, take up with a band of these Viking crusaders, a group bound for the Holy Lands.  They end up somewhere else entirely.

In a risky move Refn here makes the lead of his film - and by far its biggest star - a total mute.  Mikkelsen not only never utters a word, he never so much as makes a sound, not even when in combat.  Perhaps even riskier was the abstract, experimental approach to dialogue and editing that gives the film a dream like quality, even in its harshest moments, with nothing that could ever pass as a full conversation ever taking place between any of the characters - mute or not.  That Refn turns these risks into assets in a testament to his talent.

Less about the characters than its ideas - a fact borne out pointedly by only Mikkelsen being given any sort of name at all in the entire film and his being one forced on him by a child - Valhalla Rising is a film about change, bloody and violent change but change nevertheless.  Mikkelsen himself - a clear reference to Odin - is already a man out of place and out of time in this world, a man stranded on his own, a position that has led him through great hardship but also gives him a unique perspective on the battle between pagans and Christians raging around him, a battle he joins not to help either side win but simply because he can and fighting is all he knows to keep himself alive.  All of the characters here are less in control of their own fate than any will acknowledge willingly, all of them clinging to the idea that they carry some sort of larger destiny when in reality they are being carried along - literally for a large part of the film - by forces that they have no power or influence over.

By far the most abstract of Refn's work to date, Valhalla Rising makes a fascinating companion piece to Bronson.  Not only were the two shot nearly simultaneously but both find the talented Dane experimenting wildly with structure and character and how both impact his ability to tell the stories he wants.  Those raised on the multiplex will, no doubt, take issue with Valhalla's measured pace but for those willing to slide into its rhythm and world, the payoff is rich indeed.