Cult Epics, in promotion of its attractive new Tinto Brass Blu-ray double feature of P.O. Box Tinto Brass and Istintobrass, leads its own copy with that semi-clarifying quote by the aged patriarch of erotica himself.  Whether one receives Brass’s pronouncement as legitimate or just more smoke being blown by the perpetually cigar-wielding filmmaker, it is hard to deny the sure-handed nature of the otherwise light-as-feature comedy P.O. Box Tinto Brass (Fermo Posta Tinto Brass).

This matters, as the contents of Tinto Brass’s mail bag is central to this 1995 feature, P.O. Box Tinto Brass.  Clocking in just around ninety-minutes, the film is a very competently filmed version of “Penthouse Letters”, albeit exclusively originating from the female point of view.  It’s a loose anthology to be sure, made up of dramatized re-enactments of supposedly real female-penned letters.  (The film makes it clear that Brass isn’t particularly interested in the fantasies of men).

From there, Brass runs things through his quite-male filter in creating short vignettes, which ostensibly has been the hope of the letter-writers all along.  The wish fulfillment of it all is a two-way street, granting the senders the satisfaction of their letter being adapted to film by Brass, while for Brass himself, they’re an opportunity to indulge his posterior fetishes and soft gyno-gaze in the name of fan service.

Brass plays himself in the film’s playful office-bound framework, in which his gorgeous personal assistant (Cinzia Roccaforte) helps Brass sort through submissions, deciding together which might warrant adaptation to film.  Naturally, when they seize on a keeper, the film transitions to said segment, complete with a revolving door of very game actors and actresses taking on the described roles.  (Including Erika Savastani, Paolo Lanza, Cristina Rinaldi, Gabriella Barbuti, and several others).  Some are sexier than others, some are more voyeuristic than others, but all share Brass’s trademark libido.

Brass shoots lady-parts the way that Sergio Leone shot Clint Eastwood’s eyes.  That level of focused intensity is perhaps the auteur-studies through-line here, as each segment otherwise takes on a tone of its own.  (Particularly a VHS videotape, the contents of which are included and Brass in reality claims he really did receive).  They are all colorful and vibrant little fantasies, ranging from the lighthearted to the absurd.

Brass keeps things moving at a rather energetic clip, with no segment wearing out its welcome.  All physical intimacy appears to be faked, and degradation is never at all the name of the game.  Perhaps this is part and parcel as to why Tinto Brass (we’re told) maintains a strong female following.

P.O. Box Tinto Brass is held together by a spirited score by Riz Ortolani and the complete and thorough commitment of the talented Cinzia Roccaforte, who essentially steals the movie, and even manages to sell its nonsensically icky final moments.  Cult Epics’ new Blu-ray presentation of the film is a remarkable thing in terms of clarity and restoration, making P.O. Box Tinto Brass all the more immersive.

Paired with P.O. Box Tinto Brass is Massimiliano Zanin’s 2013 documentary, Istintobrass.  Though a legitimate feature-length filmmaker profile, one couldn’t be blamed for perhaps questioning Zanin’s objectivity, seeing how much of his own online resume is made up of previous Tinto Brass projects.

Thankfully, he nets the necessary interviews to lend Istintobrass a good amount of scholarships and authenticity.  Yes, it’s ultimately a lot of talking heads saying nice things about Tinto Brass, but one never assumes that it’s exaggeration or untruth.  Hyperbole, perhaps. But hey, this is the movies.

After watching P.O. Box Tinto Brass, viewers may be surprised to learn of Brass’s deep and lofty cinematic ties, not to mention his earlier reputation as an up-and-coming avant-garde savant.  Much time is devoted to his early “cineaste” years, wherein he served under Henri Langlois of the Cinémathèque Française, was commissioned by Umberto Eco, and worked closely with Roberto Rossellini and Joris Ivens.  He was never then not respectable and proved to be quite respected.

It’s a reputation that’s far removed from his later persona, which auditions ladies with “the coin test”, a move straight out of the Roger Ailes playbook.  Istintobrass ends with a matter-of-fact dramatization of the practice, wherein an actress is initially considered by how sensually she picks up a coin that Brass tosses onto the floor.  Not exactly #MeToo-era friendly, but one supposes that the documentary would be guilty of lying by omission to not cover this aspect of Tinto Brass.

Before Brass was “the aged patriarch of erotica”, however, he earned a reputation as a boldly artistic visionary, was dubbed “the Antonioni of the 1970s” and the heir apparent of the Nouvelle Vague.  He made highly visible films such as Salon Kitty, Dropout, and quite notoriously, Caligula- one of the most-seen Italian films in the United States.

Only later would he transition fully and unapologetically into erotica with popular titles like Paprika and All Ladies Do It.  In the doc’s representation of these later efforts, it’s apparent that Brass did not set aside his filmmaking acumen, communicating that he for one never felt that pure erotica was beneath his skill set.

To be clear, there’s plenty about Brass that doesn’t sit well.  Not now, anyway.  The optics of a cigar chomping mogul leering at beautiful women one-third his age are simply not good, no matter who comes in to defend the guy.

That said, Brass has no shortage of noteworthy supporters.  Helen Mirren, Franco Nero, Sir Ken Adam, Gigi Proietti, and Serena Grandi are just a few of the personalities interviewed for this career-spanning documentary about him.  Featured critics offering further history and analysis include Gianni Canova, Marco Giusti, and Manilo Gomarasca. 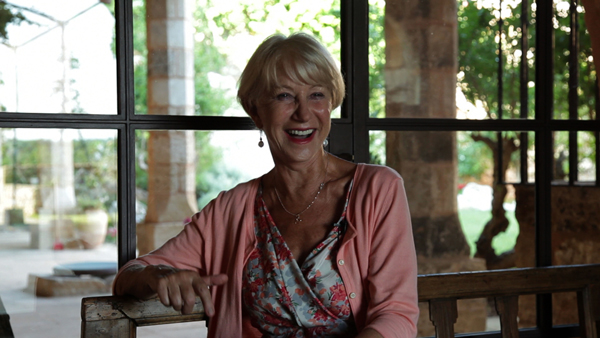 Tinto Brass fans will not want to miss out on this special set.  Cult Epics is smart to pair the filmmaker profile documentary with the worthwhile but admittedly slighter feature film.  Between the fictionalized documentary-esque framework of P.O. Box Tinto Brass and the earnest documentary approach of Istintobrass, their coupling is anything but incongruous.  The presence of Tinto Brass himself in both films, in all his affable chimney-like smoke-spewing glory, is the logical and ultimately welcome connection.

This two-disc slipcovered Blu-ray set is limited to only 2000 copies, and boasts the following:

Besides that opening quote from Brass about differentiating between pornography and erotica, there’s also this one: “I put two balls and a big cock between the legs of the Italian cinema!”  If that’s too direct, then the cinema of Tinto Brass is probably not for you.

There’s a crass ridiculousness here with a particular Italian male energy at the heart of it.  As a newcomer to Brass’s work, this critic emerges amused.  How can one not laugh at the philosophy, “The ass is the mirror of the soul!”?  Tinto Brass, an ass man to the end, would agree with ZZ Top who once sort of said, “I do respect her butt”.