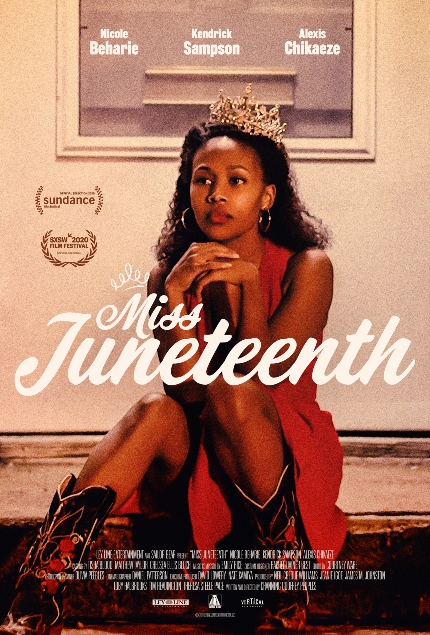 You had me at Nicole Behaire.

The actress starred on TV's Sleepy Hollow, a show that consistently impressed me during its first season, especially, with its mixture of wry humor and spooky storytelling. Behaire portrayed a local police lieutenant with a skeptical nature and a sensible approach to her investigative work. She conveyed compelling authenticity with her every scene, always suggesting greater depths to her character than might be immediately apparent.

When the series itself veered away from her character, I lost interest, since she was the main reason I was watching. After that she appeared in 42 in a pretty good supporting role as The Wife, then in Monsters and Men, which I haven't seen, and now Miss Juneteenth, a drama that might otherwise have flown under my genre-oriented radar.

Written and directed by Channing Godfrey Peoples, Miss Juneteenth is a drama that follows Behaire's character, described in the official synopsis as "a former beauty queen turned hard working single mom," which is made very apparent in the trailer. She "prepares her rebellious teenage daughter for the Miss Juneteenth pageant, hoping to keep her from repeating the same mistakes in life that she made."

With exquisitely good timing, the film is available today on various On Demand and Digital platforms. Watch the trailer below.

Do you feel this content is inappropriate or infringes upon your rights? Click here to report it, or see our DMCA policy.
Alexis ChikaezeChanning Godfrey PeoplesKendrick SampsonNicole Beharie