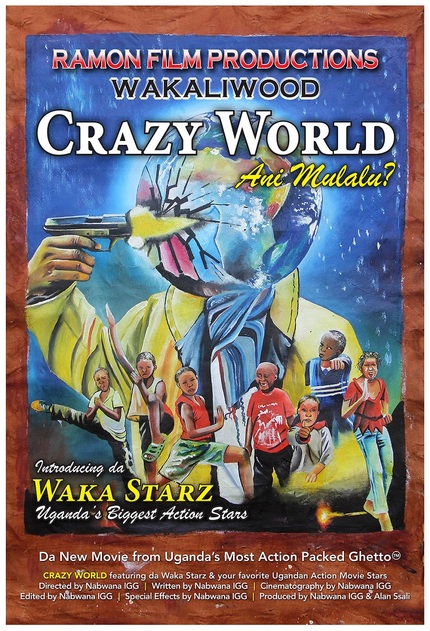 On impulse, I responded to an email about a movie from Africa. It's the best US$2.99 that I've spent all month.

The email came from Alamo On Demand and the film is Crazy World, which our own Andrew Mack wrote about last year, when we premiered the poster and a few still images in connection with a screening at the Toronto International Film Festival.

Made by Ugandan filmmaker IGG Nabwana, Crazy World is a continuous burst of joy. The plot really doesn't matter, but here's the description that TIFF's Peter Kuplowsky wrote:

"For the past decade, director, writer, producer, editor, and cinematographer Isaac Nabwana and producer/star Alan Ssali Hofmanis, have cultivated a filmmaking community in Uganda, dubbed Wakaliwood, to produce dozens of blisteringly energetic action films with an infectious DIY sensibility on budgets that rarely exceed $200 US dollars. Utilizing scrap parts to build props like helicopters, these real-life superheroes inspire more heart, imagination and soul than a thousand Hollywood blockbusters.

"Conceived by Isaac Nabwana as a pre-emptive measure to discourage the kidnapping of his own children (seriously), CRAZY WORLD opens with the notorious Tiger Mafia (a frequent Wakaliwood antagonist) embarking on a child-abduction spree. Intending to sacrifice children in a misguided belief that their blood contains magical properties, the criminals make a crucial mistake when they snatch the WAKA STARS, Uganda's pint-sized kung-fu masters. Before long, these badass brats start applying their martial-arts prowess and cunning wits to escape their captors, while their desperate parents commence a rescue/revenge mission of their own."

Crazy World is now available exclusively to purchase or rent from Alamo On Demand. I highly recommend the experience, which has been personalizing for Alamo Drafthouse viewers.