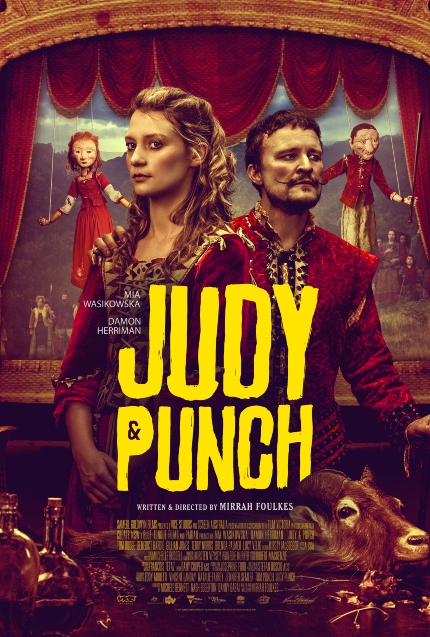 A show that dates back to the 16th century is turned on its head in Mirrah Foulkes' Judy & Punch, starring Mia Wasikowska and Damon Herriman as the legendary titular characters.

We have an exclusive clip -- NSFW, possibly, due to a single word -- that vividly demonstrates the potentially disturbing yet darkly comic spirit of the film, which will be released this week on a variety of Video On Demand platforms. In brief, Judy & Punch is set "in the anarchic town of Seaside, nowhere near the sea," per the official synopsis. "Puppeteers Judy and Punch are trying to resurrect their marionette show. The show is a hit due to Judy's superior puppeteering, but Punch's driving ambition and penchant for whisky lead to an inevitable tragedy that Judy must avenge."

Our own Zach Gayne sat down with the director and the lead actors for a fascinating conversation when Judy & Punch debuted at the Sundance Film Festival last year, discussing the origins of the puppet show, director Foulkes' inspirations, and the contemporary parallels of the story. As she notes: "Comedy is a great way to show darkness."

Watch our exclusive clip below. Samuel Goldwyn Films will release Judy & Punch on Friday, June 5, 2020. Visit the official site to watch the North American trailer and to find more information.

Do you feel this content is inappropriate or infringes upon your rights? Click here to report it, or see our DMCA policy.
AustraliaDamon HerrimanMia WasikowskaMirrah Foulkes