Blu-ray Review: DANCE, GIRL, DANCE Was Ahead of its Time 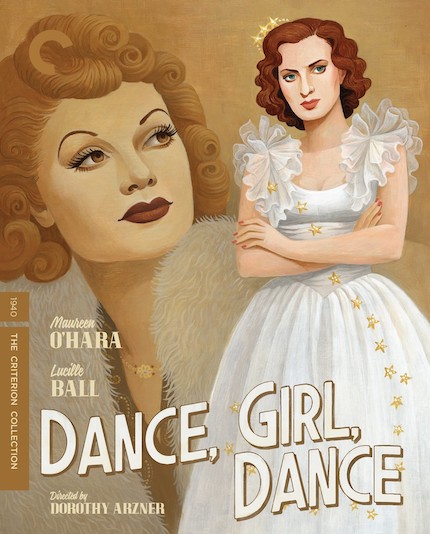 Dorothy Arzner was the first woman in the Director's Guild of America. She was also the ONLY woman director working within the Hollywood studio system in the late 1920s and throughout most of the 1940s. To be more specific, that's 1927 through 1943, when she retired from making films. I wish I could say that things have improved for gender parity in this industry --- and they have just a bit --- but we're still on the margins for the most part.

Arzner also invented the boom mic by attaching a mic to a fishing rod so that her star, Clara Bow, could move around set. Later in the 1960s, she taught at UCLA, and one of her most promising students was Francis Ford Coppola. Watching Dance, Girl, Dance, it's clear that Arzner was a solid director who really knew her stuff. She worked her way up as a typist, then a reader, script supervisor, editor, and screenwriter.

Similar to All About Eve, Dance, Girl, Dance stars two young dancers (of course) who couldn't be more different. One is "Bubbles," (a ridiculous and frankly in my opinion, infantilized stage name) played with panache by soon-to-be Hollywood legend Lucille Ball (I Love Lucy). Bubbles is showy, brash, unapologetic, but also an opportunist that has no qualms about stealing roles or men. The character later changes her name to something more fierce that reflects her actual personality, "Tiger Lilly."

The other star is the quiet, pensive Judy, played by Maureen O'Hara. She was another Hollywood heavyweight who stared in films like Hitchcock's Jamaica Inn, The Hunchback of Notre Dame, and Miracle on 34th Street. Judy just wants to be a great ballet dancer.

The two friends are part of a dance troupe that disbands due to the death of Madame, the eldery Russian matriarch who runs the troupe. As she lay close to death in Judy's arms, she implores the dancer to go see Steve Adams, who may be able to offer her employment in his productions.

Since this is a melodrama, there are several missed connections and there's also a drunken rich guy getting married, unmarried, and married again because he's silly. The traditional love triangle becomes more of a love quadrangle.

As Bubbles becomes the very successful burlesque dancer Tiger Lilly, she courts the society photographers (early papparazi) with her dalliances. Desperate for work, Judy accepts her friend's offer as an opener for her act, but it's one of a stooge. That means that she plays comedic relief, someone for the audience to make fun of before the man show. Awful.

It's at one of these performances that Judy grows a backbone and yells back at the mainly male audience, confronting their leers and terrible behavior.

Dance, Girl, Dance is an example of where gender in film comes into play. The Madame was originally a male role until Arzner changed it. The film itself focus on the very rich female lead characters, with the men taking a back seat. And the aforementioned stand that Judy takes chastizes the audience here in its entirety:

"Go on, laugh, get your money’s worth. No one’s going to hurt you. I know you want me to tear my clothes off so you can get your 50 cents’ worth. 50 cents for the privilege of staring at a girl the way your wives won’t let you. What do you suppose we think of you up here with your silly smirks your mothers would be ashamed of? We know it’d be the thing of the moment for the dress suits to come and laugh at us too. We’d laugh right back at the lot of you, only we’re paid to let you sit there and roll your eyes and make your screamingly clever remarks. What’s it for? So you can go home when the show’s over, strut before your wives and sweethearts and play at being the stronger sex for a minute? I’m sure they see through you. I’m sure they see through you just like we do!"

It must have been breathtaking to sit in a cinema in 1940 and hear that. Ahead of its time, indeed.

The Criterion Collection has released a lovely Blu-ray release for Dance, Girl, Dance; the picture is stunning, clear and rich in black tones, and the sound is excellent as well.

The illustrated cover is a wonderful representation of the leads in the Art Deco style reflecting the more theatrical aspects of the production. I especially enjoyed the interview wherein Francis Ford  Coppola speaks about his time at UCLA in the 1960s as an impoverished film student learning under Arzner. It's amazing how a good mentor can affect one's personal life and career. The interview was heartwarming, really.

If you're a fan of Old Hollywood or are interested in filling in the gaps of women directors in cinema history, you'll really enjoy Dance, Girl, Dance. You can find out more and add the Blu-ray or DVD by going to Criterion's page for the film here.