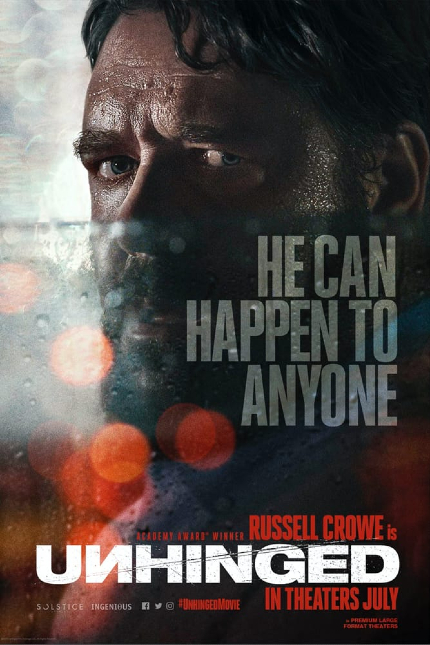 I'm sorry. No, really, I'm sorry. Let me say that again: I AM SORRY. Now, please stop terrorizing me and everyone I know and love.

I'm talking to you, Russell Crowe. First, I am sorry that I took yesterday off from my usual media habits and thus missed the debut of the trailer for your upcoming film, Unhinged, in which you portray a man who gets very, very angry after a woman honks her car horn at him. It reminds me of Michael Douglas in 1993's Falling Down. Still, I AM SORRY.

Next, I am sorry that I missed the official announcement that Unhinged "will debut in theaters on July 1st, which will make it the first studio release post confinement. Solstice Studios made this decision after extensive consultation with NATO and theater chains in an effort to help re-open theaters by providing new and original content." That's very 'brave' and maybe a bit wild that they will open a movie featuring a very angry man, though he does appear to be practicing the social distancing idea for the most part, except for that bit where he sits down with a man in a restaurant and bashed him with something and then walks away with the man's telephone. I SAID I AM SORRY.

Because I am sure you will insist, here is more from the official announcement about the film, I AM SORRY, your film: "Unhinged is a psychological thriller starring Academy Award-winner Russell Crowe from Carl Ellsworth, the writer of Red Eye and Disturbia and Lisa Ellzey, the producer of Warrior and Kingdom of Heaven.

"It takes an ordinary, everyday incident to its most terrifying conclusion in telling the story of a mother who leans on her horn at the wrong time, to the wrong guy. 'Road rage' doesn't begin to describe what he's about to do to her and everyone she knows. The film is directed by Derrick Borte (American Dreamer) and also stars Caren Pistorius, Gabriel Bateman, Jimmi Simpson and Austin P. McKenzie."

Good luck to everybody who goes out to see Unhinged in walk-in and/or drive-in theaters when it opens on July 1! Watch the trailer below. Please. (Is he still standing behind me?) PLEASE!

Do you feel this content is inappropriate or infringes upon your rights? Click here to report it, or see our DMCA policy.
Austin P. McKenzieCaren PistoriusDerrick BorteGabriel BatemanJimmi SimpsonRussell Crowe