The anime series adaptation from Polygon Pictures, now streaming on Netflix, floats on a strong current of likable characters and swirling action. 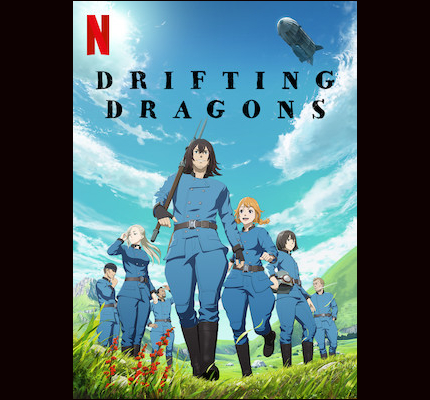 Lighter than air, the ship flies through the skies with the greatest of ease, chasing legendary beasts, with a few cooking tips on the side.

Immediately appealing, the first episode of anime series Drifting Dragons features dynamic action that is easy to follow, combined with the suggestion of characters who are familiar yet (potentially) fresh out of the gate, due in large part to the premise: the crew of an airship hunt for dragons.

Based on a manga series, written and illustrated by Kuwabara Taku and first published in 2016, Polygon Pictures produced the anime adaptation, which debuted in Japan in January 2020 and has now premiered in its 12-episode entirety on Netflix. Directed by Yoshihira Tadahiro, the first episode introduces the venerable Quin Zaza airship and its crew, as seen through the eyes of Takita, a newbie who is eager to take her place on the sailing vessel.

Indeed, the series has the feel of a seaworthy adventure, even though the salty sailors are searching for dragons in the sky instead of whales (or sharks or other dangerous large creatures) in the ocean. Putting the action in the air gives the hunting sequences an entirely new dimension to explore.

More than that, the characters are engaging and likable. Takita could be reduced to the stereotype of a 'feisty young woman,' but she demonstrates an aptitude for hard work and a capacity to learn that quickly impresses the mostly all-male crew. The crew itself is not entirely male, either; Vanabelle looks like a traditional, voluptuous female, for example, but may be the most seasoned of them all, while other women share in leadership roles and otherwise demonstrate their air-worthiness.

Because the characters are well-developed, their hidden qualities emerge only as needed to fuel a particular episode. We get the sense that the other members of the crew may know about some secrets that have been hidden by their fellow crew members, but not all of them, and they are sufficiently gracious to accept their differences in personality and temperament without making a fuss about it.

Happily absent of any know-it-all characters, or any men who are too bossy for their own good in their view of women, it's easy to feel that the crew could have been drawn from a slightly-fantasized, real-life workplace. They are actually friends, or at least cordial to one another, even if they're not all work buddies. Really, it's like a military crew, without all the death and dismemberment.

Operating at times like a workplace sitcom, the series uses humorous situations as comic relief from the palpable dangers that come from working in the skies in search of giant creatures that can tear people limb from limb, or breathe fire down upon the flightiest of ships. The ship is not a luxury liner; it's maintained on a sensible budget that has been stretched to its limits due to the vagaries involved in catching dragons.

Action scenes peel off smoothly, and nearly continuously in some episodes, but without the exhaustive cutting and extreme framing and angles that can become tiresome in other series. The airship is not welcomed by the citizens of the world beneath, which harbors prejudices and fears that have built walls between landlubbers and those who sail the skies above.

Each episode advances the overall narrative, without resorting to cheap cliffhangers, and constantly building arcs for the characters that are resolved as needed. Without any life-changing mystery to follow or any life-ending apocalypse on the horizon, I was happy to gulp the season down, three episodes at a time over a few days.

As a bonus for cooking fans, most episodes also feature the preparation of a meal involving dragon meat and related delicacies. If I ever need to subsist solely on dragon meat, I know where to find some good recipes.

Summing up: High-flying anime action adventures, with very likable characters. Makes for a pleasant treat of a season; easy to binge.