Coming Soon on Criterion: THE COMFORT OF STRANGERS From Paul Schrader, TONI From Jean Renoir 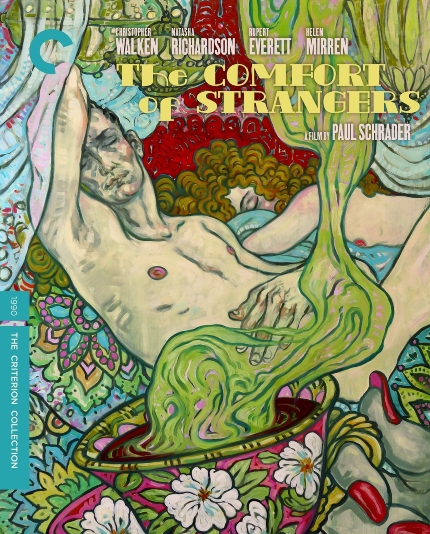 Recently, I've been watching all the films directed by Paul Schader that I hadn't seen before -- which, admittedly, is most of them -- and I found The Comfort of Strangers (1990) to be a chilling, discomfiting drama, difficult to describe without spoiling the reasons why it strikes such a deep chord within my soul.

Happily, the Criterion Collection has done the hard work for me; the company will be releasing the film on Blu-ray in August 2020, featuring a new, restored 4K digital transfer. It's described as a "spellbinding study of power, control, and the frighteningly thin line between pleasure and pain ...an unsettling, sadomasochistic seduction imbued with an atmosphere of sumptuous dread."

The new edition will also include new interviews with director of photography Dante Spinotti, director Paul Schrader, actor Christopher Walken -- who is incredibly dapper, chaming, and diabolical in the film -- and editor Bill Pankow, plus interviews from 1981 and 2001 with novelist Ian McEwan and actress Nathasha Richardson.

Jean Renoir is a landmark director, thanks to his classics La Grand Illusion (1937) and The Rules of the Game (1939), but also for Boudu Saved From Drowning (1932) and more. In the five years after Boudu and Illusion, Renoir made five films, including Toni (1935), which I haven't seen yet. The Criterion Collection will be releasing it in a new edition with a new 4K digital restoration. The film is based on a true story and follows an Italian migrant who carries on affairs with two women at the same time, which sounds ... er ... complicated and more than a little stupid. It's set in the South of France, of course, if that helps.

Directed by Volker Schlöndorff and Margarethe von Trotta, The Lost Honor of Katharina Blum (1975) is a title I remember circulating in rep theaters in the late 70s, especially, though I never managed to see it. "When a young woman spends the night with an alleged terrorist, her quiet, ordered life falls into ruins," says Criterion's official release, in part, so that's probably sufficient for most fans of the New German Cinema.

Town Bloody Hall (1975) revolves around Norman Mailer and four women in a war of words at a panel discussion, captured initially by D.A. Pennebaker and later condensed by Chris Hegedus. Criterion claims it is "a dazzling display of feminist firepower courtesy of some of the most influential figures of the era, with Mailer plainly relishing his role as the pugnacious rabble-rouser and literary lion at the center of it all." A new interview with Hegedus is included.

The monthly slate from Criterion will also include a box set, The Complete Films of Agnes Varda, encompassing 15 (?!) Blu-rays. Go forth and shop at the official Criterion site.

Do you feel this content is inappropriate or infringes upon your rights? Click here to report it, or see our DMCA policy.
Blu-rayCriterionCriterion CollectionDA PennebakerJean RenoirPaul Schrader