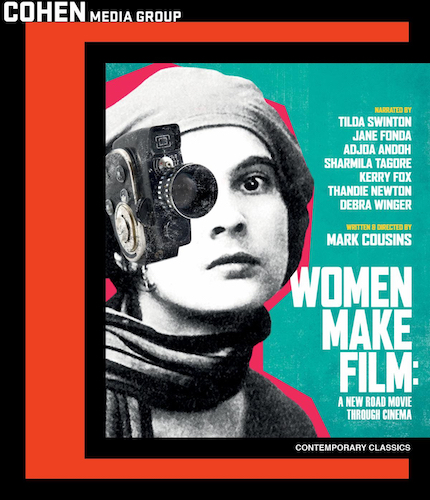 When a publicist contacted us about reviewing writer-director Mark Cousins' latest series, Women Make Film: A New Road Movie Through Cinema, I was ecstactic.

As a filmmaker, I've been devouring his excellent The Story of Film at home on DVD --- not only is the collection informative and inspiring with brilliance in film theory, but Cousins' soft Irish cadence has been soothing to hear in these dark days.

As a woman, it's refreshing to hear that someone gave enough a damn about us enough to work for several years on a documentary about our contributions to film. As a woman filmmaker, Women Make Film is very dear to me. After garnering terrific reviews on the festival circuit (TIFF, Venice, etc.), the doc has landed for streaming on the BFI Player, as well as for purchase on Blu-ray from Cohen Media.

No matter who you are, if you're interested in world film history, or if you're a student of film, Women Make Film will make an impact. You may become furious to see glimpses of what has not been taught or shared or lauded. You may want to burn down the patriarchy, and you'd be right to want do so; a huge wealth of talent has been hidden away from you.

However, your anger may be soothed by an entire universe of stories, craft, and history opened up to you. It may feel like sunlight bursting through storm clouds.

Here in the United States, women held many writer and director positions when the film industry was in its infancy in the 1910s. But then Wall Street got wind that these were great-paying jobs with power and fulfillment, and took nearly all of these jobs for themselves and other men, thereby pushing women out largely for... well, forever. Countries that push both men and money (patriarchy and capitalism) forward often also push women back. It's not just the U.S., but Ireland, Spain, and Italy, which is why more women filmmakers have originated in say, Soviet Russia, Bulgaria, and Romania.

This is changing, however slowly. People are waking up to injustices done. My personal hope is that this series will now be a popular film school supplement. It's a crime that more of us don't know these filmmakers.

As for the actual documentary, Women Make Film takes shape via a road movie narrative; as the chapters change, we transition to the next one with scenes of driving on roads, highways, on tracks --- a literal movement through time. The doc is narrated not just by Swinton (also an executive producer), but also by Jane Fonda, Thandie Newton, Kerry Fox, Debra Winger, Sharmila Tagore, and Adjoa Andoh.

There are 40 chapters over 14 hours of exploration into global women filmmakers with clips. These chapters vary with traditional film theory lessons illustrating "Openings," "Endings," "Tone," "Framing," "Tracking," and "Framing," to how to depict certain themes and relationships, such as "Bodies," "Sex," "Death," "Memory," and even "The Meaning of Life."

How do we portray such dense, heavy topics in cinematic storytelling? How do we make sense of our everyday lives, as well as existential questions that have dogged us throughout civilization?

If you watch Women Make Film, you may discover some answers or enjoy some revelations. At the very least, you will absolutely find new films and filmmakers to seek out. 14 hours is a time commitment for sure, but your eyes will open and your knowledge will grow. In any case, Women Make Film is more than worthy of your time.

For a complete list of the films and chapters covered within Women Make Film, check out the doc's website.

To stream Women Make Film in the U.K., head over to the BFI Player here. It appears that some of the films are available to stream via the BFI Play via Roku in North America, but results will vary due to geo-blocking and territory rights.

To buy the Blu-ray in the U.S., you can go to Barnes and Noble here, Wal-Mart here, or Best Buy here, among other retailers.

Do you feel this content is inappropriate or infringes upon your rights? Click here to report it, or see our DMCA policy.
Blu-ray reviewfilm historyfilm theoryJane FondaMark CousinsstreamingTilda Swintonwomen filmmakers