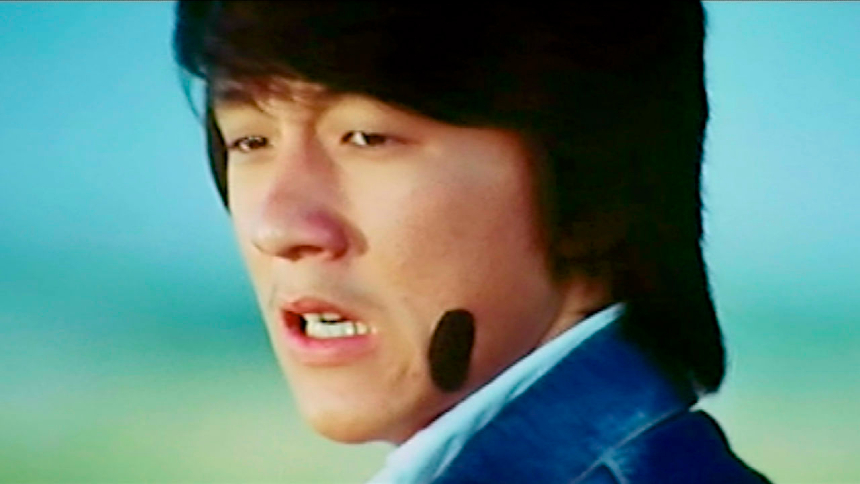 How do you act with a giant fake mole stuck to your face?

The other day, I had to search Netflix to find Tigertail, which I watched and thoroughly enjoyed. After that, I stumbled upon a rare Jackie Chan curio to complete a very strange Saturday night double-bill.

Chan appears in the first couple of scenes as the leader of a gang of young criminal tough guys who rough up defenseless people and steal their belongings. Then a couple of the bad guys try this again with a police woman (Yuen Qiu), who puts a damper on their plans.

The story then shifts to a heroic taxi driver (Charlie Chin) who was driving a hapless woman who had incriminating photos in her purse. It turns out that Chan, aged 19 (?!) at the time of release, is only a mid-level gangster, and his supporting role is rather minor, noteworthy primarily because of a remarkably large mole that is stuck to his baby face.

At this point in his career, Chan had begun landing small roles; he appeared in 12 films that same year, often as a thug, and was also doing stunts. By at least one source, he was the uncredited stunt coordinator for this film, and he does look pretty good jumping onto the top of a slow-moving taxi cab (so he can punch the hero). He also can be seen smoking. Later, though, he slaps a defenseless woman around as part of his criminal activities, which is a bit jarring for a longtime fan, such as myself, to witness.

Actor-turned-director Mu Chu appears to have been addicted to snap-zooms, of which there are a plethora, but the film was released in April 1973, so that was the fashion. The film, aka Police Woman, Rumble in Hong Kong, and The Heroine, offers a few fleeting pleasures, not least of which is the opportunity to watch it in widescreen with legible subtitles. The source material looks a bit battered, but not as terrible as I initially feared. It's also presented in its original Mandarin, though it's apparently post-dubbed.

It's a good Saturday matinee film, best enjoyed with a food or beverage of your choice. More reviews of the film can be read at HKMDb. The great John Charles reviewed it in some detail at his site, Hong Kong Digital, and I completely agree with one point he makes: "The low point comes when Chin disparages dirty books and movies for corrupting HK youth, introducing a moral high ground far beyond the reach of this grungy little potboiler."

Do you feel this content is inappropriate or infringes upon your rights? Click here to report it, or see our DMCA policy.
Charlie ChinChing NanHong KongMu ChuYuen Qiu