Now Streaming: WOODPECKER DETECTIVE'S OFFICE, Solving Mysteries With the Flair of a Poet

A poet becomes an investigator out of necessity in the lighthearted series, now streaming on Crunchyroll and VRV. 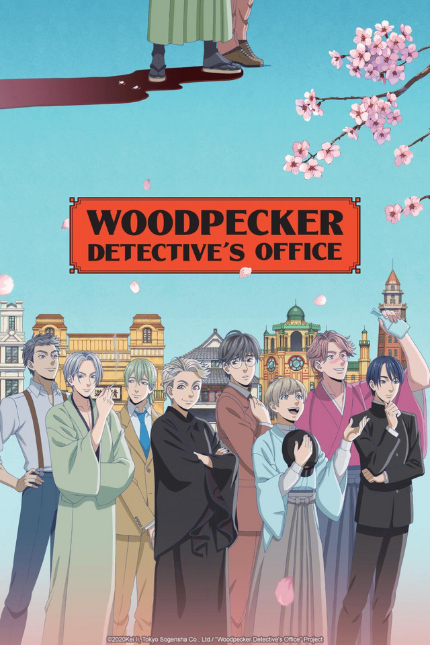 He may lack any investigative training, but he sure can write beautiful poetry.

It's a mystery: how did a poet become a detective? In the effective first episode of the new anime series, that question is answered, while also laying the groundwork for more mysteries to be solved.

Looking back at his younger days in the Meiji Era in Japan (1868 to 1912), Kyosuke Kindaichi (voiced by Sakurai Takahiro) fondly recalls how he met Takuboku Ishikawa (Asanuma Shintaro). Hailing from the same hometown, they have both moved to Tokyo with dreams of success.

Though he longs to become a writer, Kindaichi has found employment doing routine office work and anticipates becoming a schoolteacher. His friend Ishikawa, who lives in the same boarding house, is a poet at heart and in purpose, which means he is even more impoverished than Kindaichi.

One day, they enjoy a meal together and then take a walk. For some reason, Ishikawa insists on ducking into a "tea house" (or, discreet house of classy prostitution) and there uncovers a dead man, freshly murdered. Cool and calm, Ishikawa analyzes the clues on scene and, basically, solves the case before the police arrive.

Thus emboldened, and about to be evicted, Ishikawa decides to open his own private detective agency out of his room, dubbing it "Woodpecker Detective's Office." Since the bond between Ishikawa and Kindaichi has recently been tightened due to Kindaichi's kindness, a partnership of sorts is sure to follow.

First published in 1999, Ii Kei's mystery novel features two real-life characters as they investigate a "supposed ghost haunting" in Japan's first Western-styled skyscraper. The skyscraper can be seen in the first episode of the series, yet it remains to be seen how big a role it will play throughout the show.

Summing up: A winner, judging by the first episode. Woodpecker Detective's Office goes straight onto my watchlist.

Do you feel this content is inappropriate or infringes upon your rights? Click here to report it, or see our DMCA policy.
animationanimeAsanuma ShintaroCrunchyrollJapanLiden FilmsSakurai TakahiroVRV