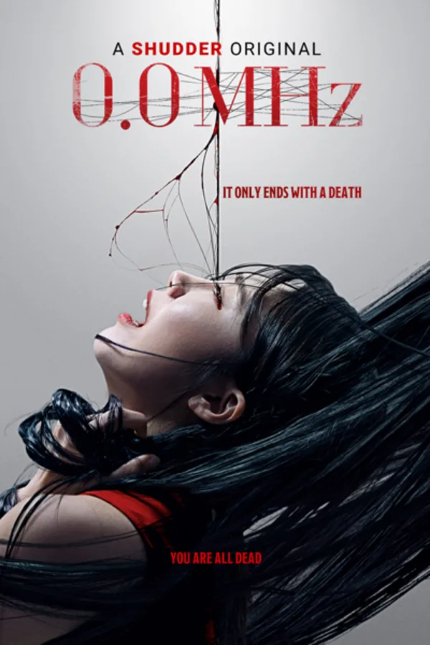 It's not just a ghost. It's a hair ghost. Talk about split ends...

Though I have not yet had the ability, desire, or, frankly, reckless disregard for my personal safety to tune in the frequency required to contact a Korean hair ghost, rest assured that director Yoo Sun-Dong and a risk-taking cast and crew have done that for all of us.

In the horror thriller, "members of a paranormal exploration club go to an abandoned house in the remote small town to prove the existence of a ghost using radio frequency-based technology. Unfortunately, the young students unwittingly become the ghost's host..."

Bad haircuts abound, usually, leading, inevitably, to bad ghosts, and evil hair. Still, we can all relate to people enduring a 'bad hair day' or a 'bad hair night,' so the curious may wish to proceed. Bear in mind, however, that my friend and colleague James Marsh was not a big fan of the film when it was released in Hong Kong last year, as he wrote at South China Morning Post:

"0.0 MHz is adapted from a hugely popular webtoon (online comic) created by Jang Jak, which garnered notoriety for its graphic and legitimately unsettling imagery. The film's efforts to recapture that success falls flat, as flimsy CG visuals and deafening audio fail to compensate for a lack of atmosphere or tension." The cast, says Mr. Marsh, "can do little to disguise the fact that 0.0 MHz is also the frequency at which crushing boredom sets in."

Now, I like James, and often I draw the same conclusions as him about movies, but sometimes I violently disagree. Therefore, possibly out of my disagreeable nature, I may watch the film anyway. The choice, dear reader/streamer, is yours.

Do you feel this content is inappropriate or infringes upon your rights? Click here to report it, or see our DMCA policy.
Choi Yoon-youngJung Eun-jiShin Joo-HwanShudderSouth KoreaYoo Sun-Dong