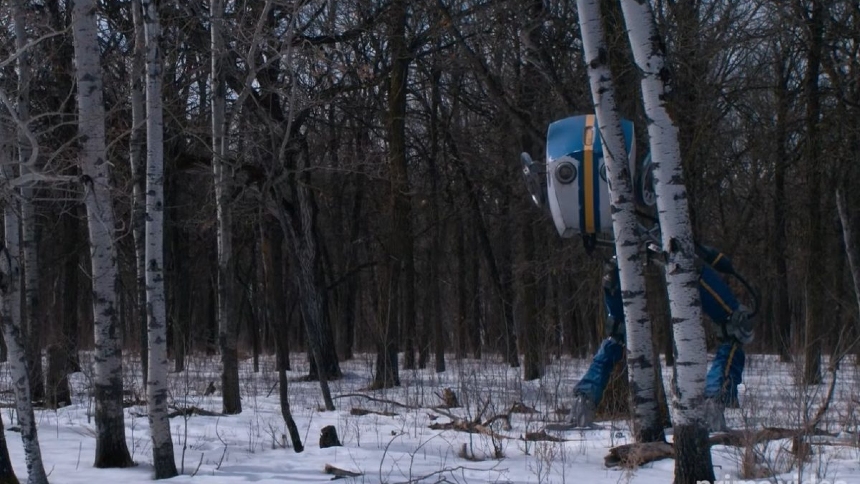 Exploring a new world stirs up surprising, yet calm emotions.

Tales From the Loop
Series will begin streaming April 3, 2020, on Amazon Prime.

If books can prompt readers to imagine people and events, paintings can stir viewers to imagine the stories surrounding the artwork.

The series begins with a child's eye view of the small town in Ohio where she lives. The movie-theater marquee shows Ingmar Bergman's Summer With Monika (1953), which suggests both a 1950s-ish time period and nostalgic wish-fulfillment. We also get a look at a large, bi-pedal robot, which looks to be abandoned in the woods nearby, which furthers the idea that this world, lovely and peaceful as it is, is not our world.

It's a town ruled by its one big business, a very mysterious facility, which, again, adds to the intrigue. Life looks idyllic, but the young girl's home-life is disrupted when her mother doesn't come home from her job at the facility one night. That leads to the unlocking of even more mysteries.

Directed by Mark Romanek (Never Let Me Go) and accented by a musical score composed in part by Philip Glass, the first episode establishes a dreamy, seductive tone that is very inviting. Two other episodes from the series were made available for preview, helmed individually by Andrew Stanton and Charlie McDowell. who both directed episodes of Legion.

To be clear, Tales From the Loop is primarily concerned with its characters, as they wrestle with issues that are intrinsic to this alternate world, yet not terribly far from the reality we know. To that end, the three episodes each revolve around different characters, portrayed with subtlety and grace by Rebecca Hall, Jonathan Pryce, and Ato Essandoh, who are at different points in their lives, all affected by the mysterious underground laboratory and the experiments that are conducted there.

It's a beautifully-realized show that allows viewers to fill in the blanks, if desired, and get to know people, and their dreams and hopes and fears and nightmares, better.

More about Tales From The Loop