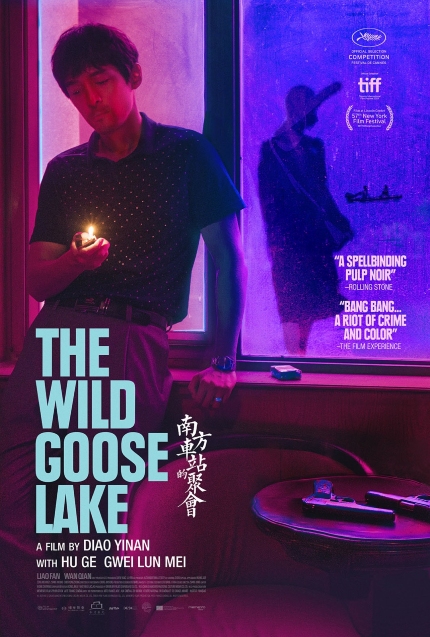 The followup to Black Coal, Thin Ice, Diao Yinan's blistering noir that put him on the international cinema map, The Wild Goose Lake is another stylish noir/policier.

If Black Coal Thin Ice was a cold noir with its wintry setting, The Wild Goose Lake is the opposite- its subtropical setting and constant rain provide the film soaked with atmosphere and vivid colors under flickering fluorescent lights. And it's a beauty, thanks to Diao's regular cinematographer Dong Jingsong. Along with recent Long Day's Journey into Night, The Wild Goose Lake continues the tradition of 'Tropical Noir' of Wong Kar-Wai's work.

It starts out with a large gathering of motorbike stealing street gangs in the basement of a hotel. While divvying up the territories, a scuffle breaks out among rival gangs. When the dust is settled, a thin truce is made between the Crazy Cat Brothers and Zhou Zenong (Hu Ge). But unbeknownst Zhou's gang, the rising Crazy Cat Brothers made a deal behind the scenes to take over Zhou's territory, starting the same night. Zhou's gang gets attacked, and Zhou becomes a subject of a manhunt after he accidentally kills a cop while on the run.

Police Chief (Fan Liao of Ash is Purist White, Black Coal Thin Ice) organizes a large tactical unit near Wild Goose Lake to scour the erea and apprehend Zhou. Wearing civilian clothes, these cops are stationed in every nooks and crannies on the street, always watching every movement of extremely busy and crowded tourist town. But Zhou remains elusive. He gets help from Aiai (Kwei Lun-Mei), a 'bathing beauty'- a euphemism for lakeside prostitutes, who was sent by Zhou's gang. But now Zhou has large reward money on his head, he wants to turn himself in in custody of his estranged wife, Shujun (Regina Wan), so she can get the reward money. Things get messy of course, since everyone has his/her own agenda.

The police chief's relentless pursuit yields many close calls with Zhou. On motor bikes and on foot, its frenetic, large scale chase scenes in the squalid living quarters of densely populated suburban sprawl provide some of the most thrilling moments in the film. There are also some kinetic, almost cartoonish violences happening here and there: there's a sudden decapitation on a motorbike and one involving an umbrella. I laughed out loud at its Takashi Miike level inventiveness.

The film also showcases the changing China: from the emergence of middle class and its subculture - 'bathing beauties' with their wide brimmed straw hats, lessons in which motorbikes are more valuable and easier to steal, to the rigid police state with CCTV in every corner and sheer precision of its well trained tactical force in action. Attention to detail and controlled chaos Diao manages in the film is nothing short of astounding.

The Wild Goose Lake is a good looking film to be sure and well acted, especially Hu Ge, with his soulful long-face and Kwei Lun-Mei as unlikely femme fatale. Yet it is not as taut as Black Coal Thin Ice. It sets up the motion nicely, but it doesn't have a momentum to follow through its 113 minute running time. Watch it for its beauty. Watch it for atmosphere. The film is still well worth the ticket.

Review originally published during the New York Film Festival in September 2019. The film opens theatrically in New York on Friday, March 6, via Film Movement, and then rolls out nationwide in the following weeks.

Do you feel this content is inappropriate or infringes upon your rights? Click here to report it, or see our DMCA policy.
ChinaFan LiaoFranceGe HuLun-Mei KweiYi'nan Diao

More about The Wild Goose Lake