Review: THE CALL OF THE WILD Gives Mo-Cap-Heavy Adaptations a Bad Name

Harrison Ford and Terry Notary star as a prospector and a dog, respectively; Chris Sanders directs a new version of Jack London's classic tale of adventure. 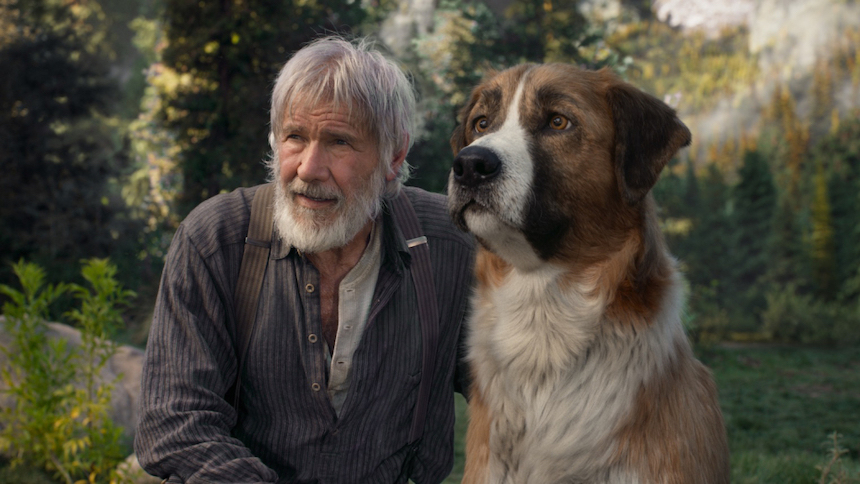 Few things excite a producer or a production company more than intellectual property in the public domain.

That strategy gave us Walt Disney and a series of traditionally animated classics stretching back (and forward) the better part of a century. It explains why certain properties like, for example, H.G. Wells’ War of the Worlds, are remade or readapted periodically (each iteration creates a new, copyrightable property and with it, a new revenue stream).

Likewise, with, among others, Jack London’s much-read, 1903 classic adventure novella, The Call of the Wild. First adapted for the silent screen in 1923, it’s made its way to the English-language big and small screens on numerous occasions, from Clark Gable in 1935, Charleton Heston in 1972, Rick Schroeder in 1993, Rutger Hauer in 1997, and Christopher Lloyd in 2009. Across the better part of a century, every iteration of The Call of the Wild shared one key, distinguishing feature: The central character, Buck, a St. Bernard/Scotch Collie mix, was played by a live-action (i.e., real) Canis lupus familiaris or Canis familiaris. Until now.

Apparently, the key creative and non-creative personnel at 20th Century Studios (formerly 20th Century Fox Studios) behind this year’s $125-million-dollar adaptation of London’s novel thought otherwise, swapping out a real and/or live dog for a semi-reasonable CGI facsimile. Mo-capped by Terry Notary – second only to Andy “King of Mo-Cap” Serkis in the business – the Buck in Chris Sander’s adaptation exists only as ones and zeros inside a rendering farm located anywhere except the great outdoors or a studio soundstage.

Rendered with an over-emphasis on non-realistic anthropomorphism over realistic canine expression or behavior, Buck acts, reacts, and frolics less like an actual dog and more like a cartoon character. Unfortunately, CGI Buck has no choice but to interact with non-CGI, human performers, all of whom do their absolute, most professional best to treat CGI Buck and various other canine and non-canine animals like they’re real (when they’re obviously not).

The 100-minute, film-long emphasis on Buck’s human-like expressiveness adds a level of ludicrousness and ridiculousness to a film that repeatedly veers wildly from broad slapstick, as a young, pampered Buck wreaks havoc on the home of his first owners, the well-heeled Judge Miller (Bradley Whitford) and his brood in the sunny climes of Santa Clara, California, to Buck’s harsh, brutal treatment at the hands of ruthless, club-wielding kidnappers. It’s almost enough to induce whiplash in moviegoers regardless of age or temperament.

In short order, however, Buck’s kidnappers sell him into servitude as a sled dog to long-haul postal workers, Perrault (Omar Sy) and Françoise (Cara Gee), in 1890s Alaska during the Klondike Gold Rush, and later after Perrault and Françoise lose their route to technological advancement (trains), Buck changes hands again, losing his relative freedom to the mustache-twirling, villainous embodiment of greed, Hal (Dan Stevens), before a grizzled loner and trauma escapee, John Thornton (Harrison Ford), rescues Buck and turns The Call of The Wild into a gentle buddy comedy. (When Thornton invites Buck into his tent one late, chilly night, you know it’s the epitome of platonic love between a man and his oversized dog.)

Buck’s physical and emotional journey – from pampered pet (civilization) to alpha dog (semi-civilization) to alpha wolf (un-civilization) – still gets plenty of screen time in the new adaptation, but when it does, it’s impossible to suspend the disbelief necessary to accept Buck as a living, breathing, flesh-and-blood canine of the St. Bernard/Scotch Collie kind. Even when he’s supposedly at his most canine-like when Buck squares off against his sled-dog rival, Spitz, for sled dog dominance – Buck’s CGI-ness never crosses over into believability.

The Buck-Spitz fight quickly devolves into questionable physics and even more questionable biology. It’s not helped by the studio’s decision to keep the fight utterly and completely bloodless (against white snow, no less). Nothing feels real. Everything feels, looks, and sounds fake, diminishing or outright eliminating whatever stakes (Buck’s fate) along with them.

The human performers fare slightly better. While Whitford barely gets any screen time (2-3 minutes total), the bulk of The Call of the Wild gets split between Perrault/Françoise on one hand and Thornton on the other. Sanders and his screenwriter, Michael Green, hint at hidden depths in Perrault and Françoise’s relationship, but never go beyond a few lines of dialogue or exchanged glances, leaving Sy and Gee with the unenviable task of filling in underwritten characters.

Ford, of course, gets the closest to a complete arc in The Call of The Wild: Thornton starts off as a mournful, melancholic alcoholic and ends redeemed by the unconditional love of a dog. Their long, doleful exchanges turn up Buck’s anthropomorphism to 100. (It’s a wonder that Buck doesn’t drop all pretense and starts talking back out of frustration to Thornton.) Ford might be pushing 80, but his movie-star charisma has barely faded with the years. You can almost – almost being the operative word – believe he’s interacting with an actual dog, not a CGI canine created by a small army of animators in distant countries.

Do you feel this content is inappropriate or infringes upon your rights? Click here to report it, or see our DMCA policy.
Chris SandersDan StevensHarrison FordTerry NotaryThe Call of the Wild