Review: I WAS AT HOME, BUT..., The Best Kind of Cinema

Director Angela Schanelec's take on the effects of grief might be less inscrutable than her previous film, 'The Dreamed Path,' but that doesn't make it any less challenging. 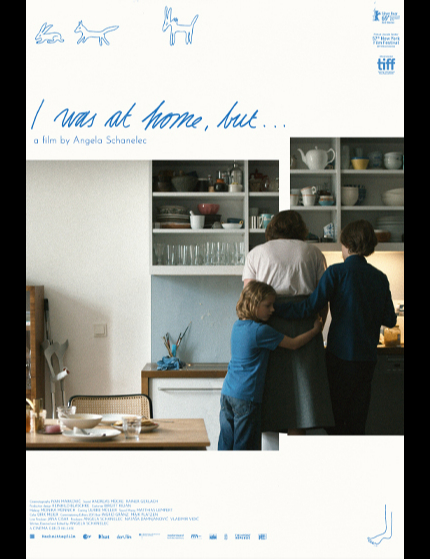 Angela Schanelec's take on the effects of grief in I Was at Home, But... might be less inscrutable than her last film The Dreamed Path, but that doesn't make it any less challenging.

Mostly, it concerns Astrid (Schanelec regular Maren Eggert), a widowed mother of two: young daughter Flo and troubled teenage son Philip. As typical in the Schanelec universe, in a series of image fragments without much dialogue throughout the film, we gather that the father (who was in theater) had been ill and died about two years ago.

Philip (Jacob Lasalle) had been missing but emerges from the forest, with his yellow jacket all muddied up and an injury to his foot. Astrid is elated, as seen in a silent scene where she hugs Philip and remains motionless for a while until the camera cuts. One could guess that the death of the father contributed to Philip's behavior.

Astrid is in a vulnerable state emotionally and acts out her frustrations outwardly in any human contact. There is a lengthy segment where she buys a second-hand bicycle from an old man who uses an electro-voice box to communicate. After finding out the bicycle is a junk, she tries to confront the old man and get the money back. Even though the old man offers to fix the bike, Astrid is belligerent.

She assumes Philip's teachers are considering expelling him for his off-screen, unseen behaviors, and lashes out at them. She also scolds a filmmaker friend rather harshly, on his use of a terminally ill person in his film that she just saw. She says that there is no truth in acting and it was irresponsible for him to have the terminally ill person being in the scene with actors 'pretending'.

She explodes at her children when they make too much noise or make a mess in the kitchen (even if it was well intentioned). However small and insignificant these interactions are, they poke at her raw emotions, which have not yet healed.

A silent, pastoral scene involving a rabbit, a donkey and a dog bookends the film. Schanelec's affinity with filmmaker Robert Bresson is a known fact. But the appearance of donkey really tickles the senses here. As the dog takes apart the rabbit because it's his nature to do so, we see it laying to sleep under the watch of the donkey.

In Au Hussard Balthazar, the donkey is seen as an allegory for Jesus, who forgives all our sins. Does Schanelec equate grief as one of our natural tendencies, so that lashing out against death is forgivable? Then there is the motif of a crown that keeps popping up and I can't help reverting back to the crown of thorns/flowers in the Bresson film. Then what about a Hamlet high school recital, where Philip plays the ill-fated Danish prince?

There is a slight subplot involving Lars (Transit's Franz Rogowski), one of the teachers in Philip's school who is going through a break-up. There is a heart breaking scene at night in an empty parking lot. Lars wants a child, because he is afraid of vanishing. There is nothing to show that their love ever existed. But she doesn't want to. She can't be anyone's wife, because she is on a mission. A mission to be alone and lonely. For what, exasperated Lars asks. She doesn't know.

Just like other Schanelec's work, I Was at Home, But... is a puzzle piece that is never solvable. We have opaque characters with Bresson-style delivery. We instead concentrate on gestures, details inside the frame in compensation for the lack of dialogue. It's those fragmentary images and colors that we play around in our heads long after we leave the theater to make sense of it. Even more so than Godard's, Schanelec's cinema concentrates on the 'visual' part of the medium. It is the best kind of cinema I can think of.

Review first published during the New York Film Festival in October 2019. The film will open in select U.S. theaters via Cinema Guild on Friday, February 14, 2020.

I Was at Home, But... (official trailer) from Cinema Guild on Vimeo.

More about I Was at Home, But