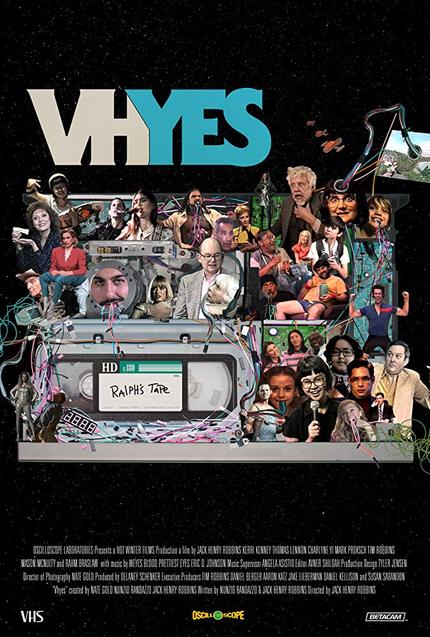 The '80s were a wild time to grow up. Technology blooming all around us in new and bizarre ways created entire new types of obsession for adolescents. The mass proliferation of home recording devices gave rise to the VHS tape trading culture, as well as birthing the unique phenomenon of shot-on-video filmmaking, breaking down the barriers that kept many away from attempting to participate in the world of film. Thirty-five years later, these odd-men-out in the world of cinema fanaticism have gained their own cache, with entities like Lunchmeat VHS 'zine and Bleeding Skull devoting themselves completely to appreciation and documentation of the bastard offspring of the culture.

While there have been attempts to recreate the style of the SOV feature craze - Dude Bro Party Massacre III from 2015 is a prime example - it still doesn't manage to capture the kind of obsessiveness that came from being immersed in a world where you could finally capture anything or experience you wanted at the click of a round red button. This is where Jack Henry Robbins' VHYes comes in.

A hallucinatory mixtape of analog imagery meant to evoke the erratic mindscape of a twelve year old boy with a shiny new toy, VHYes is a delirious journey through the media scape of the mid '80s. When Ralph's (Mason McNulty) family gets a new video camera, he immediately goes to work documenting his every fleeting thought and interest, accidentally recording over his parents' wedding video. Shot completely on VHS and Beta, VHYes is a mix of self-shot footage of Ralph and his friend Josh (Rahm Braslaw) being dorky pre-teens and a number of increasingly strange TV programs that seem to seep into one another as the film goes on.

While there is no plot to speak of, there is certainly a progressive disintegration of Ralph's mental state as the mix of found footage spook stories, infomercials, and public broadcast spoofs get weirder and weirder and ultimately seem to threaten the very fabric of his reality. In the end, VHYes plays like an extended Pixy Stix induced '80s flashback for those of us who were there. Fragments of memories flash on screen a few minutes at a time, never quite making sense, allowing our minds to invent reasons for those memories to have lasted this long, and the more banal the actual experience, the harder our brain has to work to make the pieces fit into a nostalgic narrative. It's actually pretty brilliant, like watching someone else's half-remembered dreams morphing into a wild cavalcade of lo-fi imagery that makes no sense, but still somehow makes perfect sense.

Robbins' direction perfectly creates this imagined reality, especially when it comes to the segments taped from TV. Comedy pros like Thomas Lennon (Reno 911), Kerri Kenney (Reno 911), Mark Proksch (What We Do In The Shadows), Charlyne Yi (Paper Heart), and yes, even the director's parents, Tim Robbins and Susan Sarandon, make extended appearances in the film, perfectly conveying the oddity and crumbling reality of Ralph's surreal mixtape. It's an absolutely unique film experience that seems like it's going nowhere until it all falls together perfectly, making every odd non sequitur completely worthwhile.

With the current resurgence of analog culture, VHYes is an absolutely perfect appreciation of the past and the way our memories form our adult obsessions, and it's funny as hell.