THE MERCENARY Trailer: This Is No Ordinary Gun-Toting Priest 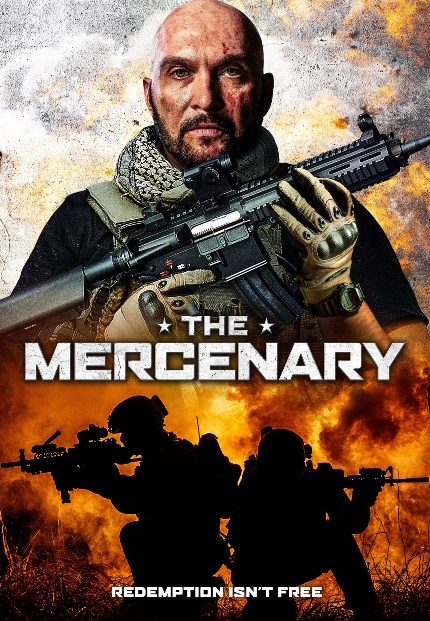 As a big fan of Triple Threat, I'm happy to hear that director Jesse V. Johnson's The Mercenary is coming soon to DVD and Digital. A new trailer reinforces the feeling.

To quote myself: "Over the past couple of years, I've watched and enjoyed Johnson's Savage Dog (2017), Accident Man (2018), and The Debt Collector (2018), which established his credentials as a card-carrying member of the 'action first, talk whatever' club of filmmaking. (This credo is summed up in a concluding fight scene, by the way.)" Triple Threat did not disappoint.

Dominiquie Vandenberg (Triple Threat) stars in The Mercenary as Maxx, "a legionnaire turned mercenary," according to the official synopsis. "When a mission in South America goes wrong Maxx is left for dead, but he is nursed back to health and reborn with a new outlook on life.

"He tries to live tranquilly within the confines of his new beliefs surrounded by his new friends at a church. But his peaceful days are short-lived when mercenaries he used to work with cross his path again and he is forced to revisit and face his own demons.

"His brutal past, war and violence have come looking for him again. His path to redemption is interrupted and Maxx becomes an avenging warrior using the skills that were his trade."

Vandengerg talked about the project, then known as Legion Maxx, with our contributing writer Mike Leeder earlier this year right here.

Beware a priest who becomes an avenging warrior, I always say, and that is proved true in the trailer, which features more action than many big action blockbusters. Check it out below. The Mercenary hits DVD and Digital on January 7, 2020, via Uncork'd Entertainment.

Do you feel this content is inappropriate or infringes upon your rights? Click here to report it, or see our DMCA policy.
Carmen ArgenzianoDominiquie VandenbergJesse V. JohnsonLouis MandylorU.S.

More about The Mercenary