Drawn from real-life, Terrence Malick directs a gorgeous film in his own inimitable style. 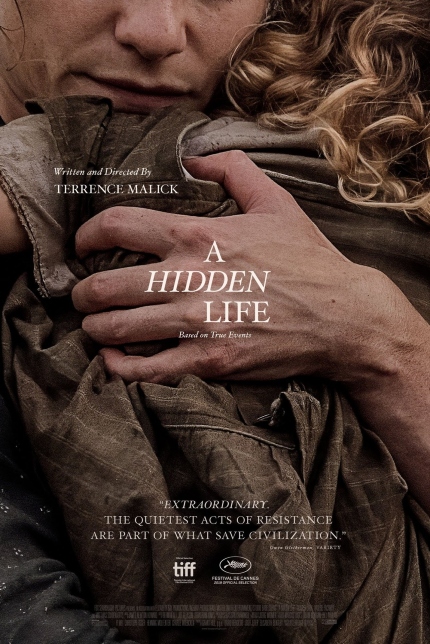 Far from the madding crowd, Franz Jägerstätter (August Diehl) lives quietly with his devoted wife Franziska (Valerie Pachner) in a friendly community of farmers and labourers in Austria.

Nestled against rolling hills and towering mountains, Franz, Franziska and their children are happy people. Always busy with farm and household duties, Franz and Franziska still make time for each other, even if it's only with a smile, a small gesture of intimacy, or a few kind words of support.

Franz is as patriotic as anyone else in the community. He willingly serves his annual military duty each year, along with his fellow citizens. Under the command of Adolph Hitler, however, neighboring Germany has begun invading other countries in Europe and that increasingly affects people in Austria, even those who live in rural areas and have little interest in national affairs.

The local citizens are quite willing to go along to get along, as it were. Increasingly alarmed by Hitler's evil machinations, Franz becomes increasingly disgruntled and shares his profound concerns with others in the village, including his friends and the town's priest, who argues in favor of going along to get along.

In time, Franz reaches a breaking point. He is presented as a spiritually-inclined man who begins to feel that he must follow his own conscience in this case, refusing to swear allegiance to Hitler or fight in a war that he does not believe is right or justified.

Terrence Malick began the decade with the awesome The Tree of Life (2011), which I loved. His subsequent narrative features -- To the Wonder (2012), Knight of Cups (2015), Song to Song (2017) -- felt like they were retreading the same ground, to diminishing effect.

Inspired by a true story, A Hidden Life employs the same, swaying, to-and-fro camera movements as in his other recent work, but to a much greater effect. This particular narrative gives the film greater, more coherent drive. It feels less like noodling and more like it's following a full-blown dramatic arc.

Malick is less interested in the specifics of the conscientious objector's beliefs and more fascinated by the effects upon Franz's emotions. As with The Tree of Life, or Badlands (1973), or Days of Heaven (1978), this is very much a film about a family and how the actions of one person can have a domino effect upon others who are related to that person, whether by blood, love, or proximity.

Director of photography Jörg Widmer, who previously worked as a camera operator on Malick's The New World (2005), as well as The Tree of Life, To the Wonder, Knight of Cups and Song to Song, apparently functions on the same visual wavelength as Malick. For all the apparent wandering camera movements, it all serves a distinct purpose in A Hidden Life, and it adds up in a satisfying manner.

Do you feel this content is inappropriate or infringes upon your rights? Click here to report it, or see our DMCA policy.
August DiehlGermanyindieTerrence MalickU.S.Valerie Pachner