COME AS YOU ARE Trailer: Goin' to the Brothel, Disabled Or Not 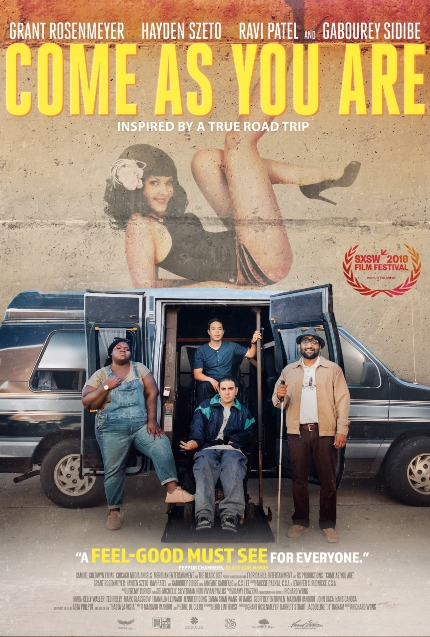 "Goin' to the chapel and we're gonna get married," sang The Dixie Cups in "Chapel of Love," written by Jeff Barry, Ellie Greenwich and Phil Spector.

In Come As You Are, three young men with disabilities (Grant Rosenmeyer, Hayden Szeto, and Ravi Patel) are most definitely not going to a chapel intending to marry. Instead, per the official synopsis, they "flee their overbearing parents on a road trip to a brothel in Montreal catering to people with special needs."

Hmm, this really does not sound like The Dixie Cups. The synopsis continues:

"Sam (Gabourey Sidibe), a traveling nurse, drives the three guys across the border as they go on this trip to lose their virginity and embrace their independence. A remake of the award winning, critically acclaimed 2011 Belgian film Hasta La Vista."

Frankly, a movie about three guys trying to lose their virginity does not sound appealing to me at all, but ... the major Hollywood studios have ignored disabled actors and characters almost entirely, so this is an independent film that deserves attention.

Our own J Hurtado saw Come As You Are when it made its world premiere at SXSW in March 2019. In his review, he notes that it is inspired by a real-life journey.

Mr. Hurtado describes the film as "a surprising underdog love story, not so much between the men and their eventual conquests, but more between and amongst themselves. Accepting their own strengths and weaknesses comprises a large part of the adventure, and [director Richard] Wong and his writer Erik Linthorst do a solid job providing every central character with plenty to work with, making this a solid feel-good sex comedy worth checking out."

Come As You Are is heading for release in theaters and VOD on February 14, 2020 from Samuel Goldwyn Films. Watch the trailer below.

Do you feel this content is inappropriate or infringes upon your rights? Click here to report it, or see our DMCA policy.
Gabourey SidibeGrant RosenmeyerHayden SzetoRavi PatelRichard Wong