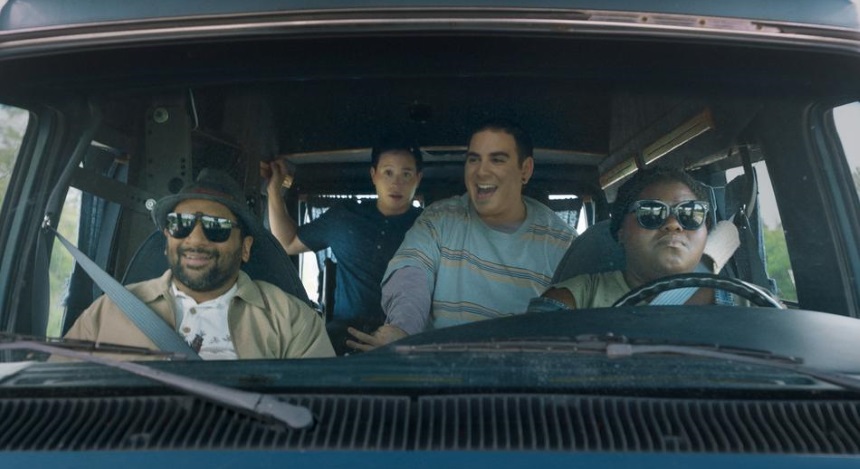 A remake of a 2011 Belgian film called Hasta La Vista, Richard Wong's Come As You Are is a charming, poignant, affectionate take on the road trip movie with an eye toward building compassion for those who are so often overlooked in day to day life.

A trio of men with disabilities abscond from their daily lives to take a journey across the country to a house of ill repute that caters to people like them. Based on the true life tale of Asta Philpot who made the pilgrimage from the UK to Spain to lose his virginity, Come As You Are is the embodiment of the classic Roger Ebert quote that "movies are like a machine that generate empathy", helping the audience to put themselves in unfamiliar shoes for the purpose of exposing them to a new point of view.

Scotty (Grant Rosenmeyer) is a little horndog. A man with a congenital defect that led to quadriplegia, he wakes up every morning with a boner that could cut glass, unfortunately for him, the only person who ever sees him in this state is his mother, Liz (Janeane Garofalo). For a man in his mid-20s, this is a problem, that is until he finds a potential solution in a Montreal brothel that caters to people with disabilities. However, there's no way for him to get there on his own. First, he must assemble a team of conspirators.

Enter reluctant compatriots Matt (Hayden Szeto) and Mo (Ravi Patel), a man with paraplegia, and a man who is legally blind, respectively. Scotty isn't the most endearing of people; with a personality that could wilt flowers and the tact of a ball-peen hammer, he makes his case to his fellow virgins, and contrary to their better angels, they agree. The trio contracts the services of a driver named Sam (Gabourey Sidibe) and her van, and they are off to see the sights and explore what it means to be sexual beings.

Leaving their parents unaware of the situation, Come As You Are quickly turns from a fun romp into a cross country chase as the elders don't believe that their children can be trusted to take care of themselves. However, this excursion turns out to be less about the destination, and more about the stories created along the way.

Richard Wong's adaptation of this true story is a clever, sympathetic view of these men who all have their own reasons for taking off on their own. It doesn't attempt to paint all of them with the same brush, allowing their personalities and stories to determine the impetus behind their individual odysseys. The film also doesn't attempt to pretend that they are all saints; Scotty is a bit of a prick, Matt, at times insufferably high and mighty, and Mo is nebbish in the extreme. This allows the audience to empathize with a crew of imperfect men simply looking for the validation that they are human and that their carnal needs are valid.

The story, though outwardly raunchy, is actually really sweet, and even managed to wring a tear or two from my eyes in spite of the crude premise. This isn't exactly a teeny-bopper romp like Road Trip, but it also doesn't hide its or its characters intentions. It may be about sex, but it's more about connection than anything else. So much so, in fact, that the actual consummation such as it is, is relatively anti-climactic. To abuse an adage that is as old as the hills, it isn't about the sex, it's about the friends they made and lost along the way.

Though it explores some deep universal truths about the need for connection especially among those for whom that touch is physically difficult or even impossible, Come As You Are is ultimately a comedy, and in that regard it succeeds mightily. The central trio have a wonderfully antagonistic chemistry that lends itself well to this kind of adventure. Sidibe at the center acts as a voice of reason and clearly the most well balanced member of the crew, even with foibles of her own. She's never a fourth wheel, so to speak, and in fact provides a lot of the film's most effective and cathartic moments.

I did find myself wondering why a film that was so focused on building empathy for these differently-abled characters chose to cast all able bodied performers in the lead roles, but in my unstudied opinion, they performed admirably. I do wish that the effort to provide representation for these often invisible characters had extended to the casting process, but I suppose that given the outcome I can only judge what was presented to me, and I had fun with the film.

Come As You Are is a surprising underdog love story, not so much between the men and their eventual conquests, but more between and amongst themselves. Accepting their own strengths and weaknesses comprises a large part of the adventure, and Wong and his writer Erik Linthorst do a solid job providing every central character with plenty to work with, making this a solid feel-good sex comedy worth checking out.

Come As You Are

Do you feel this content is inappropriate or infringes upon your rights? Click here to report it, or see our DMCA policy.
Richard WongErik LinthorstGrant RosenmeyerKaren LesiewiczKari PerdueJosé Antonio GarcíaComedyDrama