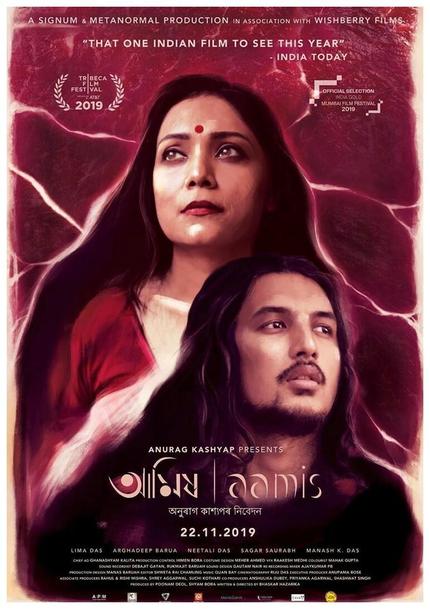 The first trailer for Assamese director Bhaskar Hazarika's genre-defying Aamis (Ravening) has appeared online and it teases a love stoy unlike any you've ever seen. A young graduate student, played by newcomer Arghadeep Baruah, in the northeastern Indian state of Assam falls in love with an older married doctor (Lima Das), but their passion remains chaste apart from a series of increasingly intimate meals. When the young man comes up with a uniquely disquieting way of getting the kind of closeness he craves but cannot have, their forbidden romance takes a gruesome turn.

Following its critically acclaimed world premiere at the Tribeca Film Festival this spring, Aamis has played at numerous festivals around the world, recently having its official Indian premiere at this year's MAMI Mumbai Film festival. Superstar director Anurag Kashyap took note of the film and has decided to present it to Indian audiences alongside the producers with a domestic cinema release scheduled for November 22nd. in celebration of this news, the team put together this trailer that gives you a very solid taste of the film's tone.

On a side note, I've been tracking Aamis for a little over two years, since it was still at the script phase, and I truly adore this very beautiful, very unusual little film. I haven't seen nor heard any sign of a release outside of India, but should such a miracle bless us, I will be certain to share that news as well.