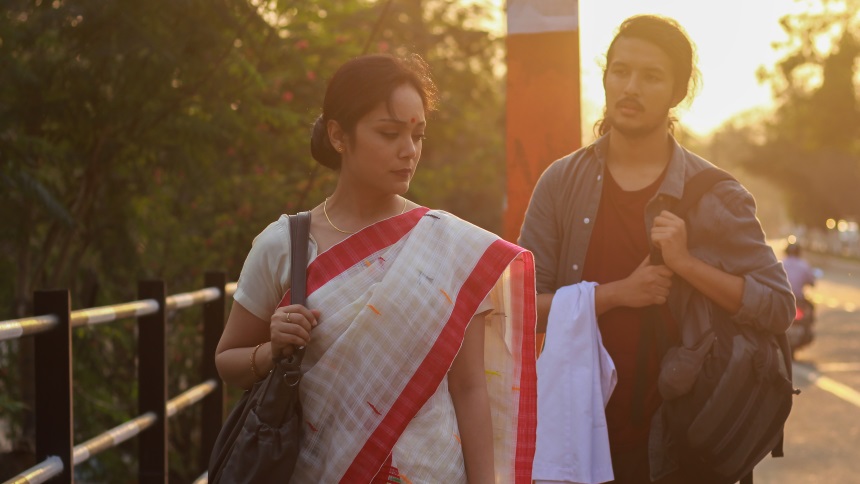 Set in the far northeastern Indian state of Assam, Bhaskar Hazarika's sophomore feature Aamis (Ravening) is a film unlike anything you've ever seen. A forbidden love story between a man and a woman separated by perhaps a dozen years, several class strata, and a provincial conservative native culture, Aamis takes that pressure to conform and harnesses it into an exotic gem that is one of the most entrancing amour fou stories in recent memory.

Sumon (Arghadeep Baruah) is a PhD candidate who has taken a passion for fine, exotic foods and used it to design a thesis based on the meat-eating habits of the natives of the northeast of India. One day he stumbles into the path of the beautiful Nirmali (Lima Das), a married local pediatrician who is able to treat a friend of his in an emergency.

In lieu of payment for her services, which Nirmali refuses, Sumon describes his passion for the freshest of exotic meats, telling her about a “meat club” to which he and a few of his friends belong. Intrigued by the prospect, Nirmali agrees to accept a meal instead of payment. Sumon, infatuated at first sight, takes the opportunity to lovingly craft a delicate, perfect portion for this woman he knows he cannot have, as a way of expressing not only his gratitude, but also courting her in the most physically chaste way possible.

Initially, Nirmali thinks nothing of the gesture, apart from appreciating the quality of the food, but soon Sumon makes it a regular pastime, and their friendship inches further and further from platonic, even though they've never so much as touched. Nirmali is dissatisfied with her marriage due to the fact that her doctor husband is frequently away on assignment, though she wouldn't dare think of crossing the line to adultery.

Sumon, on the other hand, initially seems satisfied with the intimacy he provides in knowing that his meals are touching the hands and lips that he cannot. It's a poor substitute, but it's the best he can do.

Or so he thinks.

As the emotional intimacy builds and the need to repress their mutual desires grows, Sumon hatches a plan that will bring Nirmali closer to him than he could ever be, and all while preserving her marriage and his virtue. But it's dark, very dark. With this plan put in motion, the couple's romance becomes more and more toxic to one another with Sumon making increasingly harmful sacrifices to slake the passion he's stoked in the woman he loves.

This plan, a shocking development that takes Aamis to a place that I've never seen a film of this quality go, proves to be too intoxicating for either of them to be able to turn back from what is an inevitable mutual doom. And so we experience their moral collapse together, in awe and somewhat in admiration of their dedication to this aberrant plan, crossing fingers that they end up together, all the while praying that they live to see their love sated.

Bhaskar Hazarika burst onto India's independent film scene with 2015's Kothanodi (River of Fables), an anthology of dark Assamese folk tales that premiered at the Busan International Film Festival and went on to wow audiences around the world. That film was an obvious horror, with plenty of blood and guts to spare, alongside plenty of more atmospheric elements.

It is a solid film, but still pretty obviously the work of a novice in the director's chair. With Aamis, however, Hazarika has made a quantum leap into a bizarre and entrancing genre mix that boldly and skillfully weaves elements of drama, romance, and horror together into a challenging tonal mix that certainly won't be for everyone, but works like a charm for me.

Helping Hazarika to paint this complex portrait of unrequited love is an incredible team behind the scenes. One immense step forward for the director is the visual poetry crafted by cinematographer Riju Das, who'd previously worked on Kamal Swaroop's controversial political documentary Battle for Benaras.

Das' vision here is unequalled and helps to define the feel of the film as much or more than the plot elements or characters. Das is telling a love story, and as such, he carefully frames his shots in a way that reinforces the emotion on screen. It's a tremendously well-shot film, down to the final heartrending frames.

Another major character in the film is the ethereal, delicate score by the Toronto-based Quan Bay, comprised of Assamese composer Aniruddha Borah and Vietnamese musician Tammy Nguyen. Pensive, almost innocent sounding keyboards frame action that is romantic, helping to reinforce Sumon's pining for Nirmali, and Nirmali's own pining for a satisfaction greater than the life she has. It is truly striking and a major element making the film work so incredibly well.

Themes of forbidden passion, both romantic and corporeal, cultural inhibitions, repression, and addiction saturate every minute of Aamis, making this a potent experience for film fans willing to take the risk. It's a difficult film to pigeonhole. Genre fans might struggle a bit with the pacing and the heavy focus on the emotional heft of the story, while more mainstream crowds might not be able to hang in with the dark places the film goes in the end, but Aamis should be an easy winner for adventurous art-house crowds.

To give much more in the way of plot description or comparison to similar works would be potentially spoiling the film's greatest and most potent secrets. However, Hazarika himself has declared Oshima Nagisa's In the Realm of the Senses as a direct influence and I would add Wong Kar-Wai's In the Mood for Love as both a tonal and thematic cognate.

Aamis is bound to be one of the most surprising features of the year, and hopefully a breakout film for Hazarika, who takes an inexperienced cast to places no film has ever thought to go, and certainly not one from a nation so famously conservative about what can happen on screen.

An all-consuming love story whose production utilized the ingrained cultural obstructions in India to create a story about what happens when those very same obstructions prevent free expression, Aamis is an exceptional, world class piece of filmmaking. Not only has India never seen anything like this before, I don't think anyone has, and it's about time someone did.