Ard Vijn
Editor, Europe; Rotterdam, The Netherlands (@ardvark23)
Tweet Post Submit
If we look at the Blu-ray distributing landscape, I think nobody will contest that Criterion is the most prestigious company in existence there. From 1984 onward the company has focused on quality, and, quoting Wikipedia: "Criterion is noted for helping to standardize a number of new ideas, such as the letterbox format for widescreen films, adding bonus features, commentary tracks, doing film restoration, and releasing special editions for home video."

As a collector, it's always worth checking what Criterion is doing, but while their releases are almost always excellent in the on-disc department, it's rare for them to feature flashy packaging. The covers will often be inventive, and sometimes stunningly beautiful, but apart from that it's a regular Amaray or digipak, sometimes with a booklet or fold-out inside, and that's it.

But exceptions to this rule do exist. Criterion's Ingmar Bergman boxset was nothing short of awesome (check), and their release of the Zatoichi films made me swoon (double check).

Criterion recently released two very eye-catching boxsets, and I will show them both. Rest assured that the Godzilla set is up next, but today I want to show their release of The Koker Trilogy by Iranian filmmaker Abbas Kiarostami. Criterion did something clever here, so if you want to see what the packaging looks like, here is a gallery of pictures for you. 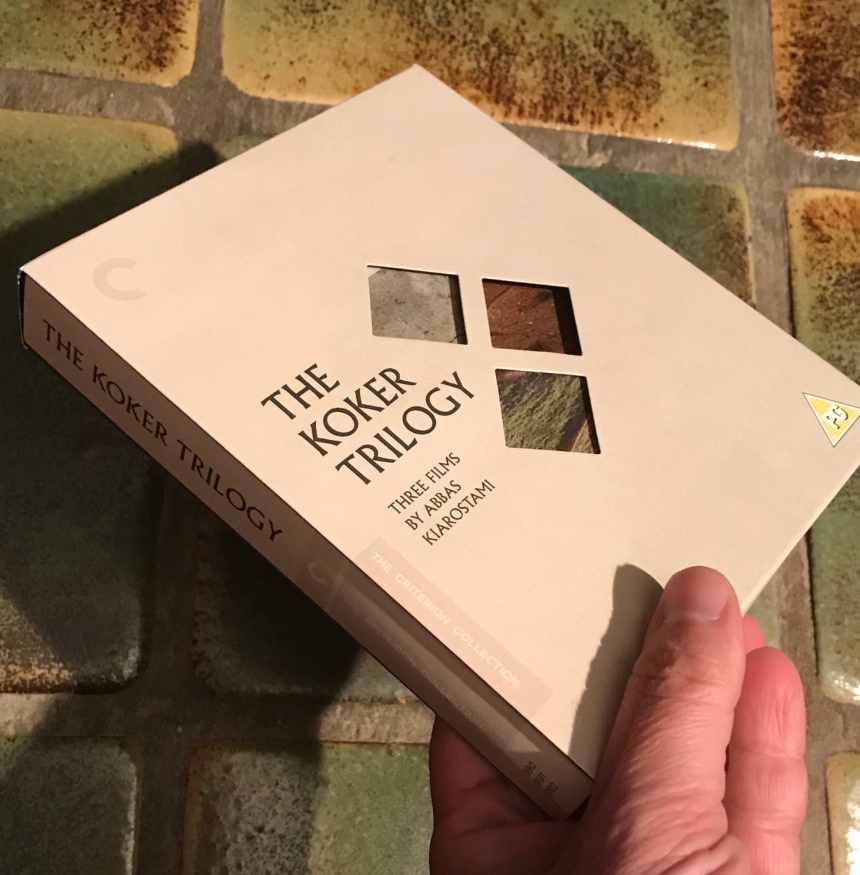 So here it is: a thin cardboard slipcover with a digipak inside, containing the films. There are holes in the slipcase, but apart from that it's not too special... or so it seems. But the three films in this set are loosely related, and not just because they all play near the Iranian city of Koker.

In 1987's Where Is the Friend's House?, you see a narrative told about a boy who tries to return a book to a classmate.

In 1992's And Life Goes On, the Koker region has been hit by a huge earthquake, and the film tells a fictional tale of people trying to find out if the child actors in Where Is the Friend's House? have survived. The narrative is fictional, but the earthquake and its aftermath are all too real.

Finally, in 1994's Through The Olive Trees we see a fictional comedy "making-of" of And Life Goes On, in which one of the actors hopelessly falls in love with the woman who plays his wife.

The three films are linked in an unusual way, nested even, so let's see what Criterion did with that idea in mind. 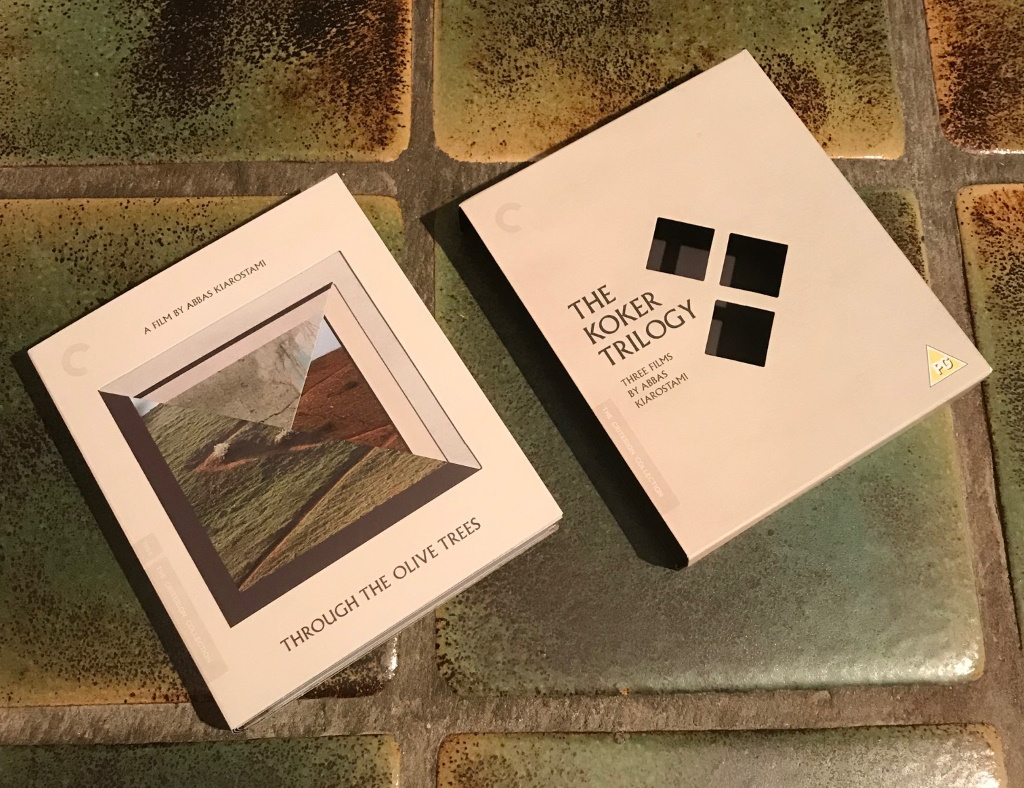 The digipak taken out of the slipcase. Do I spot... layers? 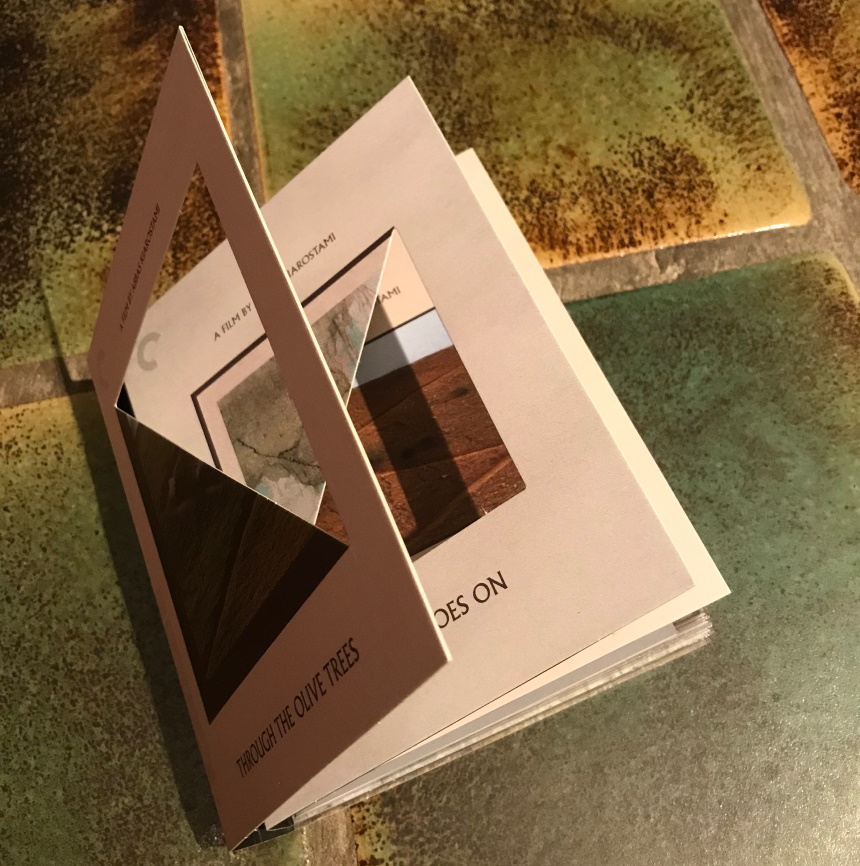 In fact, these are three digipaks, nested into each other, each showing a glimpse of the others in a window on the front. 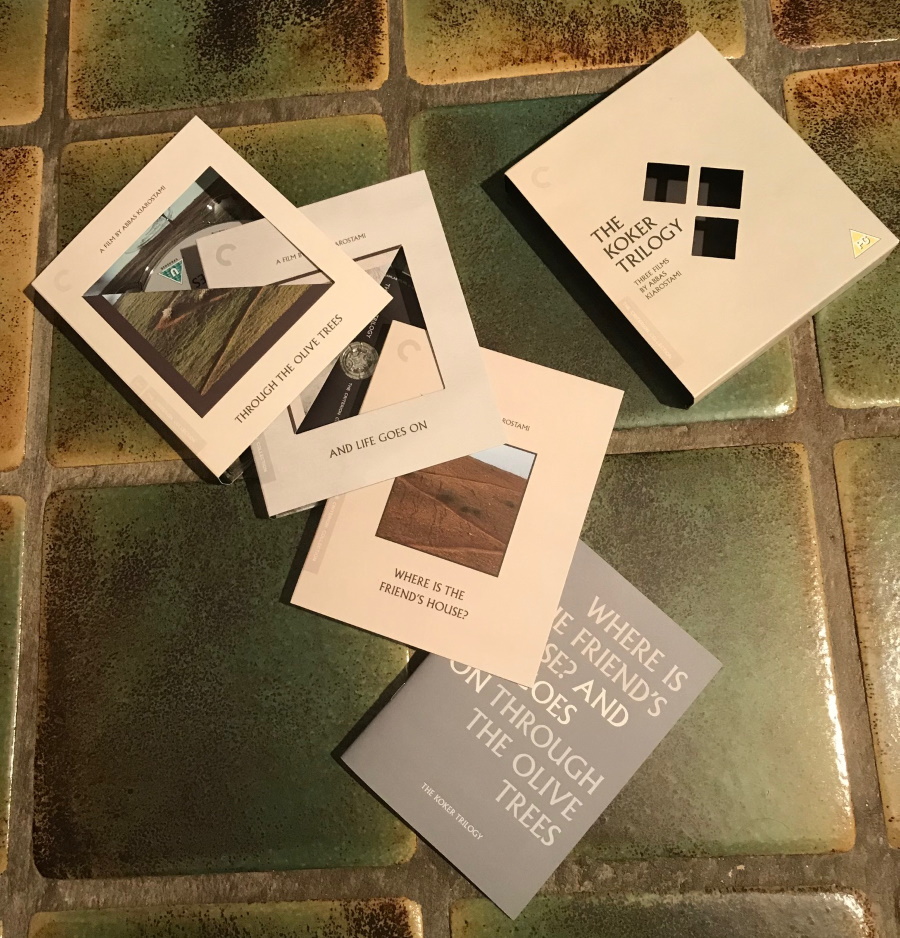 Another look at the three digipaks. And lo-and-behold: there is a booklet as well. 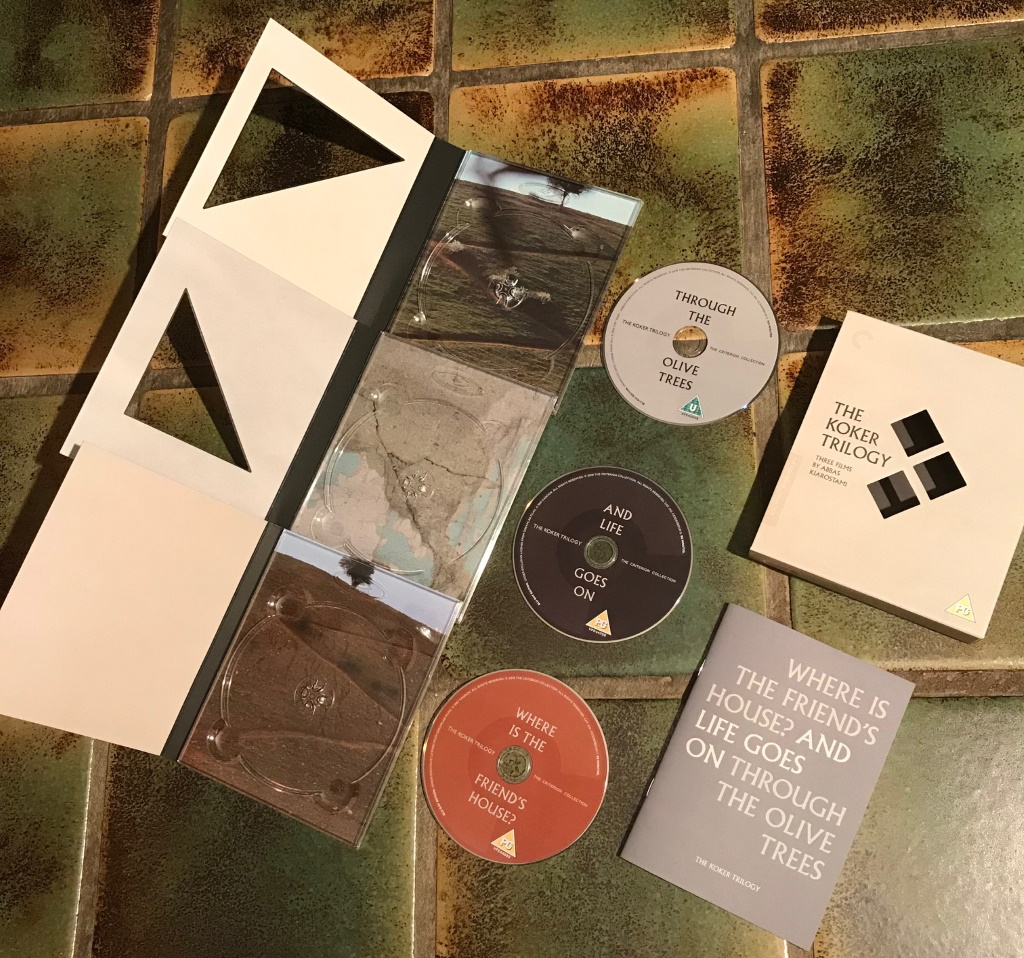 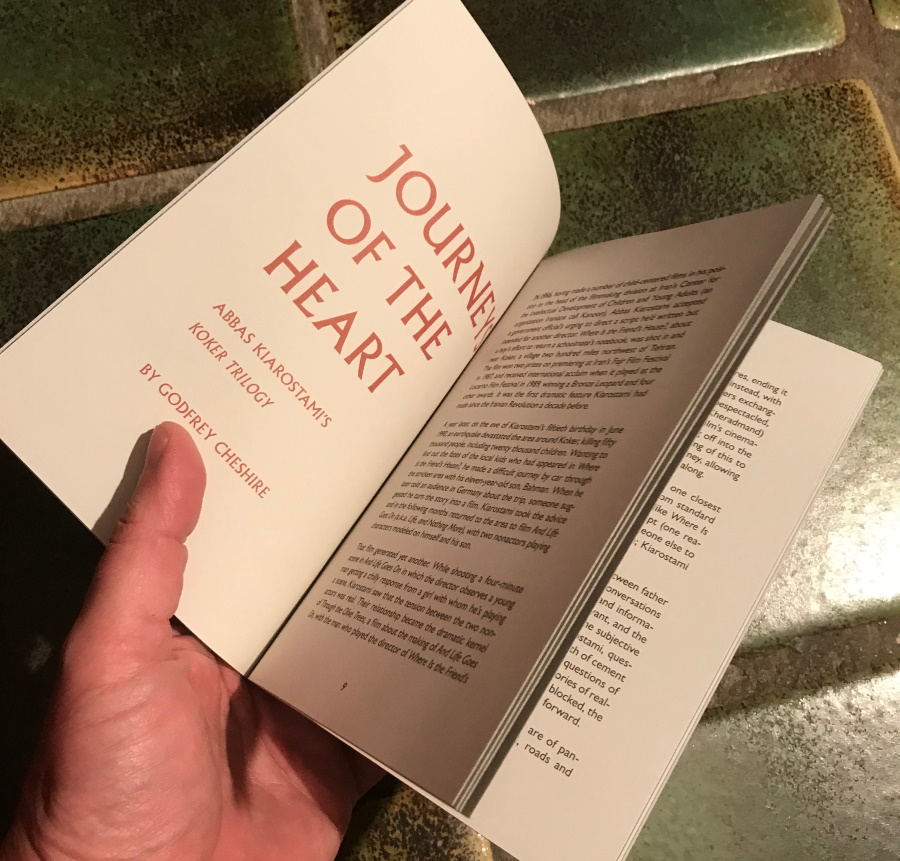 A closer look at the booklet. It's 32 pages and excellent. 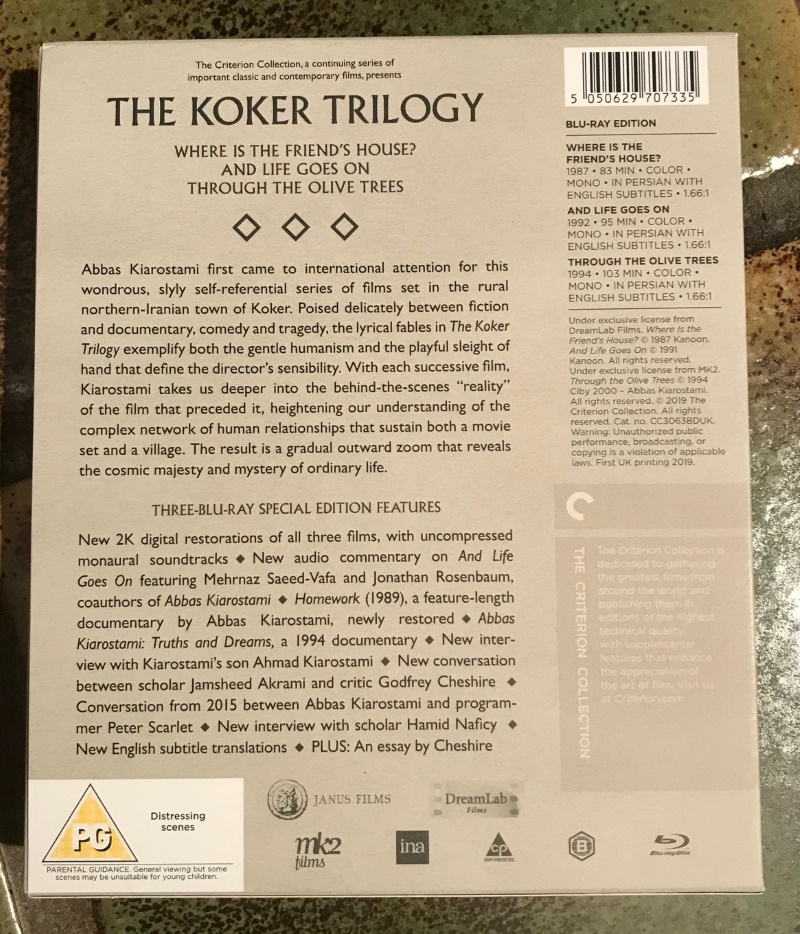 More about And Life Goes On

More about Through The Olive Trees