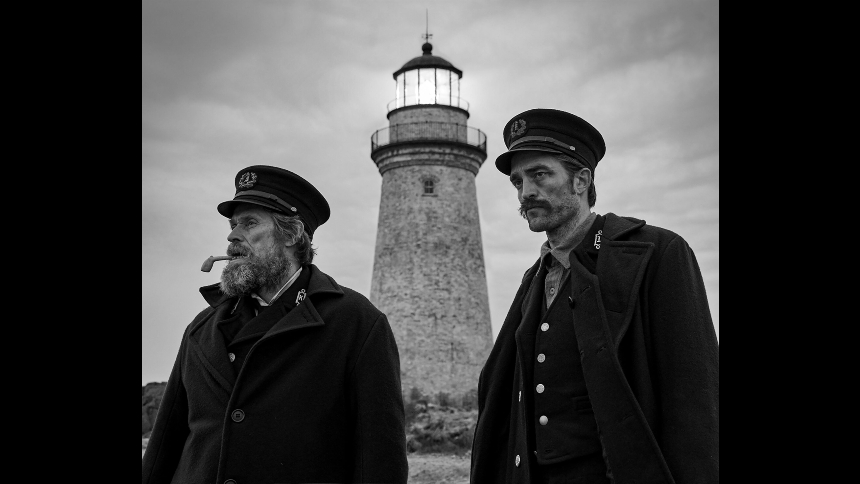 After a sleeper hit and critical success with 2015's The Witch, writer/director Robert Eggers crafts a startling, darkly funny maritime nightmare: The Lighthouse.

Like Eggers' debut feature, The Lighthouse is fully committed to the aesthetics, language, and atmosphere of its time period, in this case, late 1800's New England. The visuals here, however, are much more heavily stylized. Eggers shoots on 35mm in a claustrophobic 1:19 aspect ratio. The color palette is an eerily beautiful, grainy black and white, like octopus ink on sand -- let the nautical descriptions and puns commence! -- with plenty of grey, hazy fog and ocean mist.

The plot is deceptively simple on paper. Robert Pattinson plays Ephraim, a young man who has signed up for apprentice lighthouse duty, as a helper to Willem Dafoe's salty old sea dog Thomas. This means that the two men will be alone together on a small, rugged rock island with no other inhabitants and not exactly a surplus of supplies, except for a ton of alcohol, for a few weeks.

The two men mostly keep to themselves at first, occasionally bickering or making nice, depending on their whims. But both men obviously harbor vague suspicion toward one another.

Ephraim, in particular, resents the tasks he's assigned, which range from menial to degrading, and that Thomas won't allow him up to the light. His current gig had a high turnover rate before him, and he wonders why that might be.

When the men wind up stranded for longer than expected, their spirits dampen considerably. Cabin fever, sexual frustration, mistrust, and too much alcohol combine and produce some highly undesirable results.

The movie has an unrelenting quality, amplified by the insistent drone and repetitive movements of machinery. Interior spaces are cramped, loud and almost palpably odorous. Exterior scenes are bright and harshly exposed, just as their small shack is exposed to the punishing elements. It's inevitable when all of this takes a toll on their mental well-beings. The men are agitated by their circumstances, their mutual company, and of course that creepy seagull, who might be a drowned sailor reincarnated.

Normally, a movie set in one (general) location with only two real characters will draw comparisons to theatre. Eggers' film, however, is pure cinema. It gets up close (to unsettling effect) to textures, minute details, and facial expressions. It uses abrupt edits and montages to establish an increasingly erratic, unnerving rhythm. Many of the movie's scariest implications are glimpsed through cracks, holes, or from a distance that doesn't afford a clear view. When there is a dead-on shot of something unexpected, it's all the more surprising, like an intrusive thought flashing in the brain.

The Lighthouse's horror elements are hard to write about without spoiling. Suffice it to say that the cold, unfathomable sea and all its creatures serve as the source of mystery and menace as the woods do in The Witch. There is a very Lovecraftian vibe at work, and while Cthulhu doesn't make an appearance, I was reminded of the classic story in the film's tone, literary dialogue, and the sense that its protagonists are but insignificant men -- pawns -- in an incomprehensible, ancient game.

None of this would work if the performances weren't up to snuff, and they most certainly are. Pattinson is solid as usual, summoning up a hearty dose of derangement to try to match his co-star.

Dafoe, though, is on another level. You may forget that he isn't genuinely this old sea captain whose breath reeks of tobacco, liquor, and gum disease, one whose socks probably never fully dry and whose briny farts help push Ephraim over the psychological edge. He plays a man frustratingly mysterious for how simple he otherwise seems. Point being, he's typically excellent.

Given its unique nature, The Lighthouse risks becoming a novelty film, and letting its quirky formal traits overshadow its lasting impression. Yet it's so ferocious and cocksure that it demands to linger in your mind long after you've seen it. I watched it four weeks ago, and it has since grown in my estimation, in large part because my thoughts kept returning to it.

Ultimately, I still prefer The Witch's classic, timeless horror over this strangely enjoyable oddity. Regardless, I have such appreciation for filmmakers like Eggers, Ari Aster, and Jordan Peele. They are experimenting artistically in genre film in ways that are invigorating the current landscape of horror.

The film expands in theaters today in Canada, via VVS Films; it's also playing in the U.S. via A24 Films.

Do you feel this content is inappropriate or infringes upon your rights? Click here to report it, or see our DMCA policy.
201935mmcomedyfestivalgenrehorrorrobert eggersrobert pattinsonthe lighthousevancouverwillem dafoe