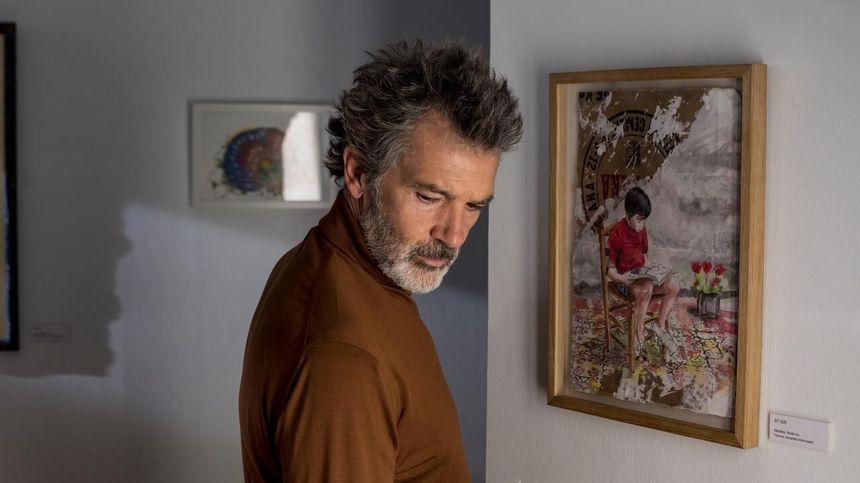 Antonio Banderas does perhaps his best work to date in Pain and Glory, for which he deservedly won Best Actor at this year's Cannes Film Festival.

He slips surprisingly well into Pedro Almodovar's loafers -- easier than sneakers to put on with chronic pain -- to play his onscreen surrogate, Salvador Mallo. Like Almodovar, Salvador is a prolific, successful aging filmmaker. Due to his chronic pain, headaches, and various other ailments, Salvador has stepped away from the camera for the sake of his health.

He learns that a Madrid cinematheque has restored one of his earlier films (the fictional Sabor), and wants him to to present it and give a Q&A. Salvador has mixed feelings about the movie, and has been estranged from its main actor, Alberto (Asier Etxeandia), for 32 years because he disapproved of the performance. A chance encounter with a mutual friend/actress, however, puts the director back in contact with his former leading man. This is the first of Pain and Glory's several serendipitous meetings and coincidences.

Salvador goes to Alberto's place unannounced, finding the aging bad boy looking like a Spanish Johnny Depp and about to engage in some midday heroin-smoking. Unexpectedly, Salvador asks to partake. Alberto is either too respectful or too immoral to lecture the filmmaker or try to stop him, and before long they're both “chasing the dragon,” and they rekindle their friendship along the way. Salvador has also found a dangerously effective cure for his chronic pain.

Meanwhile, Salvador has been spending a lot of time revisiting his past, specifically, his childhood, beginning when his family moved into a subterranean cavelike dwelling in a small village. The contrast between this womblike space and his fancy Madrid apartment (adorned with modern art coveted by the Guggenheim) is quite stark. Salvador is far from his younger self in both status and time, now four years into mourning the death of his mother and facing the reality of his own advancing age.

Through his memories, coincidental meetings and drug exploration, Salvador starts shakily finding his way back to the idea of working. But first, he must reconcile his past regrets and learn how to balance his life in a way that nurtures both his physical body and his creative spirit. As such, the movie feels transitional. It's about losing your way and finding it again, a notion as clichéd as it is timelessly resonant.

Pain and Glory is more restrained than Almodovar's signature works. There is emotion, but few fireworks. The dynamics between characters are muted, and it avoids much of the sentimentalism that often accompanies narratives dealing with pain, aging, or death. Early on, Salvador tells Alberto, while advising him on an upcoming stage performance, that it is more powerful to be holding back tears than to cry. Pain and Glory appears to share in this philosophy.

While not as startlingly impressive as Almodovar's best movies, this is a key entry into his oeuvre and signals a new, reinvigorated path for its director.