Review: HARRIET, If You Won't Let My People Go, I'll Free Them Myself

Cynthia Erivo stars as the spiritually-minded Harriet Tubman in the historical drama, directed by Kasi Lemmons. 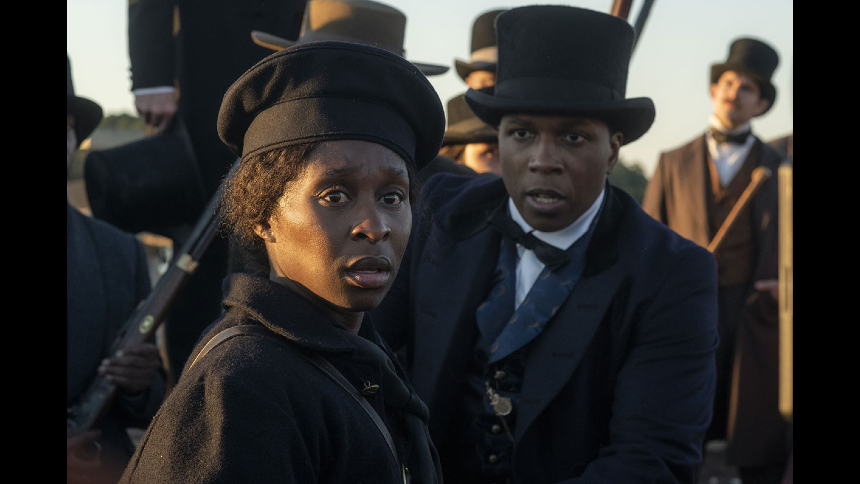 Harriet
The film opens in U.S. theaters on November 1, 2019, via Focus Features.

The woman formerly known as Minty Ross is portrayed by Cynthia Erivo (Widows, Bad Times at the El Royale) in an epic performance. She broke free from enslavement in 1849, leaving behind her husband, family and friends as she made a desperate trip across treacherous territory. Reaching safety in Philadelphia, she takes on the name Harriet Tubman and begins to acclimate to her new surroundings, making friends with abolitionist leader William Still (Leslie Odom Jr.) and property owner Marie Buchanon (Janelle Monae).

Yet Harriet cannot tolerate the idea of remaining free while her husband and other family members remain enslaved. Over the strong objections of William and Marie, she returns, only to discover that things have changed among her family and friends during the long months since she escaped. Always a devout, God-fearing woman, she has experiencd what she interprets as visions from God, leading her to a new purpose in life: enabling people to escape from slavery as she did.

She undertakes these trips with full knowledge of the dangers involved. Harriet is being tracked personally by her slave owner, the loathsome Gideon Brodess (Joe Alwyn), who hires African-American slave trackers to help him. As her successful treks free more and more slaves, Harriet becomes ever more hunted by others in the slave trade as well, who all assume that she must be a man and start calling her Moses, after the Biblical character who many believe freed a nation of Israelites from captivity as slaves in Egypt.

All these events are depicted with great clarity and excellent context by director Kasi Lemmons (Eve's Bayou); she also cowrote the screenplay with Gregory Allen Howard. As with many biographical dramas drawn from history, Harriet walks a tightrope between dry hagiography and action-filled adventures; what helps in this regard is that Harriet's spiritual views are given fair and sincere play.

Really, it's a rare thing to see an individual's spirituality presented with respect in mainstream cinema. The far more usual course is for films aimed at secular audiences to illustrate any religious leanings with a skewed, skeptical eye, while faith-based movies tend to lean quite far in the other direction, to the extent that they may become unwatchable for those who are not devoted to the same beliefs.

Harriet simply accepts Harriet as an individual. Eyebrows are definitely raised by other characters in response to her personal visions, but they are pictured as sufficiently open people that they focus on the results that Harriet achieves, rather than exclusively on her faith-spurred actions.

The admiring and welcoming spirit of Harriet is contagious and inspiring. At a minimum, it declares that positive social change is possible, if not inevitable, no matter who of what stands in opposition.

Summing up: Marked by a stand-out lead performance, Harriet is permeated with a positive spirit that fairly well demands action.

Do you feel this content is inappropriate or infringes upon your rights? Click here to report it, or see our DMCA policy.
Cynthia ErivoHarriet TubmanJanelle Monae. Kasi LemmonsJoe AlwynLeslie Odom Jr.US