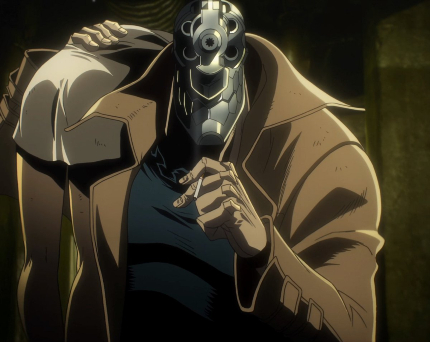 Weapons are twisted into new humanoid forms in these 'I can't believe it's a series' animated shows.

No Guns Life
Now streaming on Funimation and on Hulu.

What if you woke up and found a gun installed on the top of your body, instead of your head?

Based on a manga series by Karasuma Tasuku, first published in 2014, and produced by Madhouse, the anime adaptation revolves around a man who becomes a revolver. Inui Juzo smokes, walks and talks like a weary private detective out of classic film noir.

Suffering from bouts of amnesia, he doesn't recall, specifically, why he joined the ranks of cyborgs known as "Extendeds." In a dark, near-future city, he solves problems related to fellow Extendeds, no matter the cause or fault involved. He himself functions as most humans do, except that his physical head has been replaced by a huge revolver.

As we learn over the first two episodes, this now causes complications for Juzo, since he cannot fire the gun himself, but needs an independent Gun Slave Unit to do so. Like many other Extendeds, Juzo fought in a recent war, and developed a fear-inspiring reputation as a deadly killer.

He has no desire to kill people anymore; he just wants to get along, solve problems, and live a decent life. But he crosses paths with a young kid of mysterious origin, and that will lead to further complications.

The immediately-arresting image of Juzo is a great hook, but the second episode began to develop a conspiracy of some sort, involving many more nefarious characters. So a potential for a quasi-noir plot exists, and I'm curious to see where it goes from here.

Summing up: Yes, I have a gun instead of a head. Got a cigarette, buddy?

Azur Lane
Now streaming on Funimation and on Hulu.

Here's another show that immediately caught my attention with its bizarre premise: women become warships.

Inspired by a popular Chinese video game, the anime adaptation features absolutely beautiful crashing waves and spectacular battles at sea; all credit to Tensho's Bibury Animation Studio. It's set during an alternative World War II, as oceans of the world come under attack by alien invaders, known as Sirens, prompting human forces to fight back by fusing women with warships.

The series picks up as the human forces have divided into two warring factions, each with warring women/warships facing off, evidently continually. In their female forms, the women have chosen to dress in skimpy clothing that makes no sense at all, except for the obvious intention of luring eyeballs to the screen. Many loving shots reinforce the focus, with equally skimpy characterization.

The fanservice is nearly continuous. I waded through three episodes, and there is a hint that not all the women/warships are content with their lives, but then it was back to the fanservice. Depicting the British Queen Mary as a tea-sipping dandy of a girl did nothing to convince me to watch more. Perhaps if respect were paid to the women/warships as individuals, rather than as vessels to be slathered over, it might be more palatable for me, personally.

Do you feel this content is inappropriate or infringes upon your rights? Click here to report it, or see our DMCA policy.
animeazur lanefunimationhuluno guns life