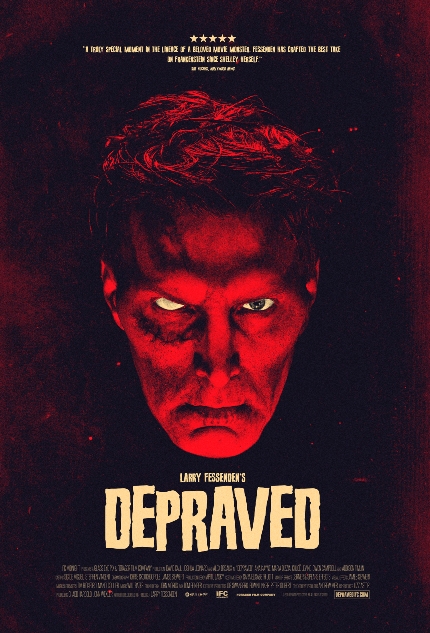 Larry Fessenden has always been among the most recognized and loved directors in the underground indie horror scene, with films like Wendigo and Habit, as well as memorable episodes in Fear Itself and The ABCs of Death 2, while also producing work within the genre and being a character actor in his own right.

To celebrate the 200 years of the writing and publication of Mary Shelley's Frankenstein in 2018, many events took place all over the world, many publications and symposiums were held, but ultimately we didn't get a great film to cap it all off, until today. Depraved, Fessenden's latest film, is the definitive capper for that celebration, a fitting tribute to Mary Shelley and a modern enough spin for it to be exciting.

Depraved get things into motion quickly by claiming the life of the protagonist, played by Alex Breaux, to then turn him into Adam, a reanimated corpse done by the experimenting of Henry (played by David Call) and the cheekily named Polidori (magnificently performed by Joshua Leonard), who are testing out new methods to resucitate and bring forward the brain power through the rewiring of neurones.

The first half of the film is cleverly structured around montages that show the advance in Adam's brain: doing puzzles, reading, talking, understanding scientific concepts and, above all, a beautiful sequence at The Metropolitan Museum of Art, where we see Polidori touring Adam around the history of art and of humanity.

Eventually the film settles into the mystery that is the life of Adam before he was killed, as he tries to piece together where he came from and how he got there. Attentive viewers will have the answers for most of these questions, and will consider this the weakest segment of the film.

But it maintains itself interesting with multiple formal choices, which are a continuation of the choices made by Fessenden to race through the usual motifs associated with the Frankenstein film: animated overlays over the action, distinct camera qualities to show memories or security footage, visual nods to earlier Frankenstein movies and classic horror, among others, which puts this film as a love letter to the genre lovers.

The succint editing and the clever points of view present in the camera angles make up for a lot of the absence in character development, which might be the film's weakest point, as we don't get to know too much of the two scientists that are doing the Adam project. Polidori just comes off as some knowledgeable asshole, while Henry is just a caring, loving, nervous prick that seems to change his will at the flip of a switch.

That doesn't matter as much as the development of Adam himself, who is the star of the film. Since he's a blank slate, we see him evolving and creating a perspective and feelings of his own, even if his monotone grovelling voice might distract, Alex Breaux is the best performer in this movie.

The film feels satisfactory because of how clever it pieces together the elements that we already know about and how it introduces technology and elements from real life to generate the definitive Prometian tale of the decade. It's a surprisingly entertaining film that speaks enough about what is humanity, while having quite a bit of fun as well.

The definitive "gag", if there is one, is a long sequence that shows us how Adam might be in the search of his "bride", just like in the classic novel, but a bit sadder, funnier and wittier.

Review originally published during What the Fest?! in March 2019. The film will open in select theaters and on VOD platforms on Friday, September 13, 2019 via IFC Midnight.

Do you feel this content is inappropriate or infringes upon your rights? Click here to report it, or see our DMCA policy.
Alex BreauxDavid CallJoshua LeonardLarry Fessenden