Now Streaming: SHANGHAI FORTRESS, China Will Save the World, We Hope 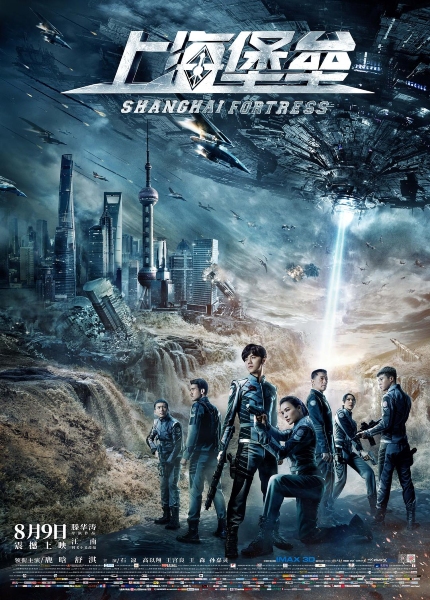 After the gigantic success of the somewhat unwieldly, yet still entertaining The Wandering Earth (available to stream on Netflix), the prospect of another bigger-budgeted, science-fiction tale from China sounded quite appealing. In his review of that film, however, our own J Hurtado noted: "Sci-fi has always been just outside of the nation's wheelhouse, which makes The Wandering Earth such an incredibly impressive anomaly."

Set "many years later," as the first on-screen English subtitle informs us, Shanghai Express posits that a Chinese spaceship has discovered a new energy source, dubbed "Xianteng." which helps the major cities of the world to advance in their technologies. Several years after that, though, Earth comes under attack by enemy alien forces, which promptly destroy all the major cities of the world, save for the final bastion against utter annihilation: Shanghai Fortress.

The alien soldiers look like giant metallic drones, or maybe they are drones, or maybe it doesn't matter, because they are can move in any direction with lethal speed and killing efficiency. They are directed from a "mother ship," evidently, and are intent on wiping out all life on Earth as quickly as possible, so who has time to dither over details?

Five years after the mother ship's first attack, the Grey Eagle Squad, young human drone pilots, are being trained to defend Shanghai Fortress from the invaders, under Commander Lin Lan (Shu Qi) and Commander in Chief Shao Yiyun (Shi Liang). Jiang Yang (Lu Han) is "the most talented" pilot, alongside, er, others. (Characterization is not a strong suit for the film.) We are also informed that the Shanghai Cannon, developed by China, is the world's last hope.

Jiang Yang nurses a schoolboy crush on his commander, Lin Lan, which doesn't seem like a good idea, what with his likely imminent death as a pilot and the destruction of the human race pending, not to mention falling for your military superior, but love is always inconvenient, isn't it?

Really, though, I believe the idea of the crush is to try and add poignancy and human drama to the spectacle of aliens attacking and wiping out mankind. It doesn't work, in part because Lu Han's awkward acting of his role. Still, we have confidence, after all, that China can and will save the world, and when is the next action sequence, please?

Directed by Teng Hua-Tao, the battle scenes are fun to watch from a video-game perspective, i.e. if you enjoy watching other people play video games, you're likely enjoy the movie. The artful production design provides good backgrounds, and the music is suitably cheesy.

Summing up: Per Asian Strike Force, "Teng's film was released to a derisive reception from critics and the public, and quickly crashed at the box-office, grossing less than 3% of what Gwo's film [The Wandering Earth] did at the beginning of the year." So, set your expectations accordingly.

Do you feel this content is inappropriate or infringes upon your rights? Click here to report it, or see our DMCA policy.
ChinaLu HanNetflixShu QistreamingTeng Hua-Tao