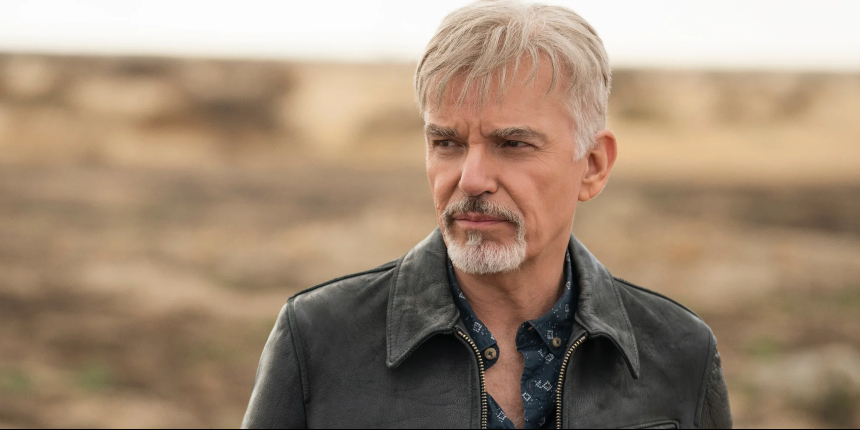 Even lawyers gotta serve somebody.

Taciturn to a fault, Billy McBride (Billy Bob Thornton) is a legendary Los Angeles lawyer, known for his sharp mind and dogged determination to root out evil.

Created by lawyer turned writer extraordinaire David E. Kelley and Jonathan Shapiro, the first season of Goliath in 2016 found confirmed alcoholic Billy down in the dumps, disgraced and drummed out of his high-profile law firm. He sought redemption by taking on a huge case that he couldn't possibly win, while living and working out of a motel room, conveniently located near his favorite bar.

Billy won the case against the heights of evil, gaining a very satisfying, multi-million dollar victory. The episodes pitted villainous foes against hapless heroes, and focused mainly on the legal aspects of the case, as I recall. William Hurt was the big bad guy, and he was certainly chilling. The cast was filled with well-written, memorable characters -- Shapiro and/or Kelley wrote all the episodes -- and terrific performances, all finely-honed and convincing.

Last year, showrunning duties were assumed by Clyde Phillips (probably best known for serial killer series Dexter) but Phillips exited the show amidst creative differences, per THR. Reportedly, the first episode was rewritten, three other episodes were scrapped, and it sounds like a big mess behind the scenes. Perhaps that explains why the season became progressively more difficult to watch.

Story-wise, the now rich and retired Billy got back into the legal game on behalf of a friend whose sons were gunned down in gang violence, tied to a Mexican criminal cartel that was extending its tentacles into Los Angeles politics and real estate. The episodes featured surgically gruesome violence for some reason, and the plot twists sometimes became risible. Then there was the passel of evil characters,who passed beyond villainy into the cartoon realm. It just didn't work for me, though I appreciated the likable Mark Duplass' best efforts to be nasty.

The third season, under the stewardship of showrunner Larry Trilling, will debut in full on Amazon's Prime Video on October 4. I'm glad to say that it marks a welcome step back from the mean-spirited tone that became rampant last year.

Billy again steps out of retirement, this time to help a friend (Griffin Dunne) whose wife (Sherilyn Fenn) was killed when a sinkhole suddenly opened up in their vineyard.Through the four episodes that have been made available for preview, the open and spacious Central California vistas are a refreshing change. Characters from the first two seasons recur, and it will be interesting to see how, or if, they figure into the evolving storyline.

The primary antagonist appears to be the Blackwood family. Diana Blackwood (Amy Brenneman) runs the family's almond-based lifestyle brand and her brother (Dennis Quaid) runs everything else. Named after their grandfather, the Blackwoods have a stranglehold on water rights in Blackwood County, and are prospering accordingly. Meanwhile, the local residents are beholden to the Blackwoods for jobs and water itself; the Blackwoods are choking off water for everyone but themselves and their friends.

Quaid is terrific, mixing his easy charm with a good dose of menace, together with a glimmer of subservience to his sister, who is far more dominant in their relationship than she initially appears, and may have a few more cards up her sleeves. Beau Bridges also makes for a strong family member, a property owner with some degree of decency, and genuine concern for others, including a woman (Julia Jones), whose father (Graham Greene) supplies more menace. Illeana Douglas costars as a witty regular at the local Native American casino.

There are more plates that are spinning so far, and I can only hope that they all turn out as well as the first season of the show. Thornton is great as the soft-spoken lawyer. It's quite enjoyable to watch the wheels in his head start to turn as he puzzles things out, asking direct questions and moving on to the next piece to solve. Some of his legal cohorts also make the trek out to Central California, including the profane Nina Arianda, the always-hopeful Tania Raymonde, and the wonderful Paul Williams.

It's possible to plunge straight into Season 3 without seeing the first two seasons, but I recommend watching a couple episodes from Season 1 (at least) to get a taste for what's in store. (Actually, that entire season is worth another watch, and is currently available on Prime Video.)

Summing up: It's the water, and a lot more.

Do you feel this content is inappropriate or infringes upon your rights? Click here to report it, or see our DMCA policy.
AmazonBeau BridgesBilly Bob ThorntonDavid E KelleyDennis Quaidstreaming