Fantastic Fest 2019 Review: HOMEWRECKER, Hanging Out with Weirdos May Be Hazardous to Your Health

Alex Essoe and Precious Chong star in a comedy of the awkward and the dangerous; Zach Gayne directed. 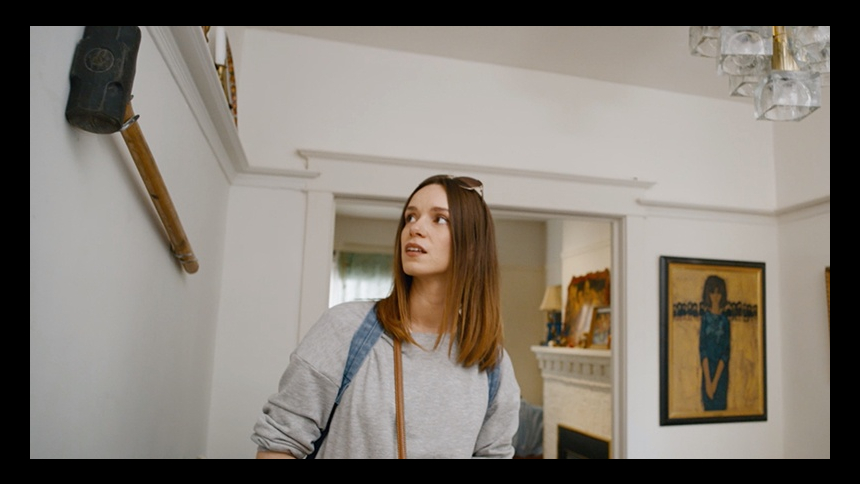 Why is a sledgehammer mounted on the wall?

Homewrecker
The film enjoyed its international premiere at Fantastic Fest in Austin, Texas.

Michelle (Alex Essoe) is not looking for a friend when she meets Linda (Precious Chong).

Sure, they share a couple of fitness classes together, and have acknowledged each other's presence. but Michelle is just trying to get some work done on her laptop in a coffee shop when Linda introduces herself and promptly invades Michelle's personal space.

I will note at this point that the film is set in Canada, which may explain a few things about the behavior that will follow. (As a point of full disclosure, let me also note that I have known director and co-writer Zach Gayne for a few years, and he has contributed to this site for those same few years.)

Stretching herself to be polite, interior designer Michelle yields to Linda's increasingly pushy invitations for them to spend some time together when Linda offers to hire Michelle for a job. As any freelancer knows, an independent contractor can rarely turn down the possibility of more paying work, and so Michelle soon finds herself in Linda's house, making more polite conversation.

She does not ask about the sledgehammer mounted on the wall in a place of honor, but, upon reflection, perhaps that should have been her first question. Before she knows it, Michelle finds herself trapped in a house with the increasingly bizarre, unpredictable, and likely unhinged Linda.

The battle between two women who have just met becomes, by turns, incredibly awkward and painfully sincere as Michelle seeks escape. Yet Linda keeps making cogent, insightful points about relationships that cause Michelle to pause and wonder if the other woman might not be entirely off her rocker. Of course, Linda then does something that makes Michelle even more desperate to get out.

The actresses, who also cowrote the script with Gayne, do a fine job of embodying intelligent, empathetic people who are intent on getting on with the next step of their lives. What, exactly, that will be differs vastly for each of them, but it's a sheer treat to watch them dance in and around the dialogue, as well as the shifting nature of their characters.

As a director, Gayne employs a good variety of styles to pump up the volume, especially in the post-'getting to know you' phase of the story. The underlying dramatic themes are present, without using a symbolic sledgehammer -- though the literal sledgehammer proves to be quite handy as events get more and more physical.

Summing up: Caution: Making new friends can be fraught with peril.

Do you feel this content is inappropriate or infringes upon your rights? Click here to report it, or see our DMCA policy.
Alex EssoeCanadaFantastic Fest 2019Precious ChongZach Gayne