Now Streaming: FRONTERA VERDE, All Is Not Quiet on the Green Frontier 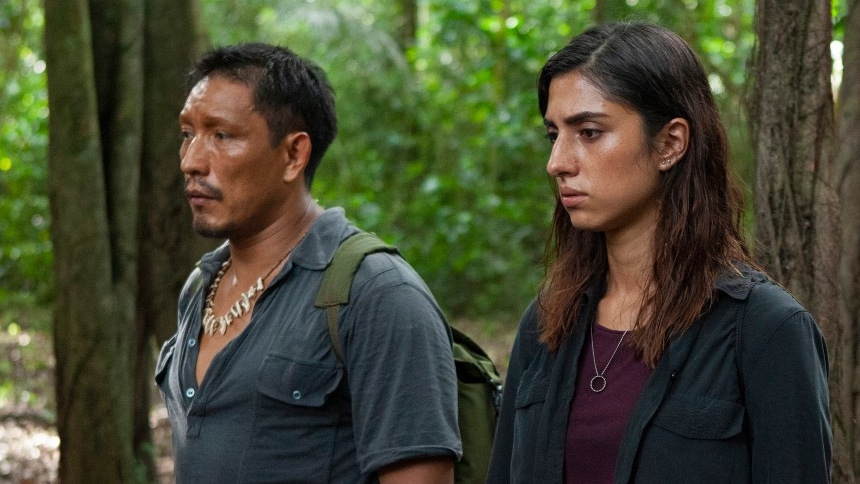 Deep in the Amazon, death and secrets abound.

An enthalling plunge into the unknown, Frontera Verde wraps a murder mystery around sacred and supernatural events.

In Colombia, detective Helena Poveda (Juana del Rio) arrives in a rural village deep in the Amazon, assigned to investigate the murder of four female foreigners, all Christian missionaries. She meets with immediate distrust from local police chief Iván Uribe (Andrés Castañeda), who can't believe Bogota authorities sent a woman or, really, anyone at all, to investigate his domain.

Uribe likes things the way they are and we soon see that he is a corrupt bully, accustomed to his unquestioned authority. Yet even he must answer to someone; in his case, it is Efraín Márquez (Andrés Crespo), a feared, mostly unseen figure who rules over his cross-border empire from somewhere in the jungle.

Helena begins her investigation, accompanied by reluctant local police officer Reynaldo Bueno (Nelson Camayo), and quickly discovers the body of a fifth woman. Uribe plasters a fake smile on his lips and does nothing to help. Helena digs in her heels; she was born in the village and nothing will stop her from finding the answers she needs and the victims deserve. Reynaldo, an indigenous person who gets disowned by his people, tries to help, even as he falls further under Uribe's poisonous shadow.

Ciro Guerra, who made the superb Embrace of the Serpent (2015), directed the first episode of the limited series, which establishes an atmosphere rich in spirituality and thick with danger. Before the episode concludes, supernatural elements are introduced, adding to the mystery.

Those supernatural elements keep bringing the story back to the indigenous people who live in perfect harmony with the jungle, chiefly Ushe (Ángela Cano) and Yua (Miguel Dionisio Ramos). The entire series, eight episodes in all, revolves around them and their (seemingly) magical powers and effect upon people, space, and time.

Summing up: Always beautiful, consistently well-acted, and unpredictable in its combination of art-house and mystery/thriller expectations, Frontera Verde is one of the best streaming series I've seen this year.

Do you feel this content is inappropriate or infringes upon your rights? Click here to report it, or see our DMCA policy.
Angela CanoBrazilCiro GuerraColombiaJuana del RioMiguel Dionisio RamonNelson CamayoNetflix