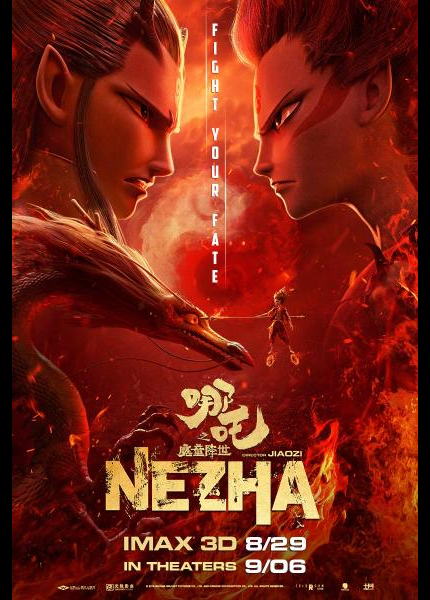 Animation, time travel, and daytime horror are on the menu.

The Mandarin-language animated fantasy is aimed at children, and I have no children, so that's my excuse for not watching this film already (it opened yesterday). The official synopsis promises:

"A young boy, Nezha, is birthed from a heavenly pearl by the Primeval Lord of Heaven. Born with unique powers, Nezha finds himself as an outcast who is hated and feared. Destined by prophecy to bring destruction to the world, the young boy must choose between good and evil in order to break the shackles of fate and become the hero."

Summing up: If you have children, or can legally borrow children from your relatives, you may want to check this out.

David Oyelowo, Storm Reid (A Wrinkle in Time) and Byron Mann (Wu Assassins) star in a murder mystery, following a police detective who suffers the murder of multiple family members. Then he gets a phone call from his dead niece, and they work together to try and prevent the murders.

Yes, this sounds like a nifty, if wacky, premise, which is a specialty of Blumhouse Productions. Director Jacob Estes helmed the intense Mean Creek some years ago (2004), which makes it intriguing. The film screened at the Sundance Film Festival earlier this year under the title Relive, where our friend and former contributor Eric D. Snider noted: "Perfectly good premise, but the film turns into a formulaic police procedural with the most obvious, easily guessed resolution."

Midsommar (Director's Cut)
Now in U.S. theaters via A24 Films.

If you watched (or heard about) Ari Aster's followup to Hereditary this summer and said to yourself, "Self, if only that movie was an even longer daytime horror to haunt my dreams and inspire numerous nightmares that will not allow me to sleep anyway," then here you go.

Florence Pugh and Jack Reynor star. Our own J Hurtado reviewed the film and wrote, in part: "I will never forgive you for asking me to review this film." (No, he didn't. Joking!) What he actually concluded: "The familiarity of the plot elements keeps it from being great, but the way in which these elements are put into play and the more shocking moments are executed definitely puts it up there with the better horror films in recent years."

About the running time, Mr. Hurtado noted: "At two hours and twenty minutes or so, Midsommar could outstay its welcome to a lot of viewers. In my mind, though, the pieces that many might be tempted to trim - the lengthy rituals that seem to stretch on forever - are actually essential to developing a sense of who the Harga people are and the amount of respect they have for their traditions."

Summing up: Patient viewers will be rewarded.