Ari Aster directs the hell out of Florence Pugh is this daytime nightmare. 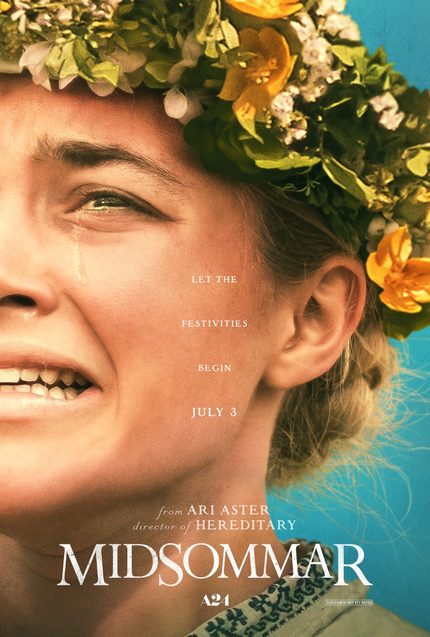 The sun is shining, the birds are singing, the trees are dancing in the breeze, and everything in Dani's life is about to go to hell.

Somebody may need to pay for some therapy for Midsommar director, Ari Aster. In his first feature, the critically acclaimed Hereditary, he took on grief in the most horrific and over the top way possible by way of an exceptional performance from Tony Colette as a grief stricken mother attempting to cope with the sudden loss of a child and its lingering impact on her family. With Midsommar, Aster once again addresses grief, but in this case his lead character Dani (Florence Pugh), runs as fast as she can in the other direction, to equally poor effect.

We join our heroine, Dani (Pugh), in the middle of an unthinkable tragedy. She finds herself an instant orphan, and the only person she has left to lean on is her boyfriend. Christian (Jack Reynor, Sing Street), who has been considering breaking it off for some time now. With this new development, he decides to stick it out, much to the chagrin of his buddies, who've been listening to his whining for what seems like ages.

The friends, Christian, confirmed academic Josh (William Jackson Harper, The Good Place), "bro" Mark (Will Poulter, Black Mirror: Bandersnatch), and their Swedish compatriot Pelle (Vilhelm Blomgren), have been planning a trip to Pelle's hometown to experience their traditional Midsommar festival for ages. With Dani's current predicament and fragile state, Christian begrudgingly invites her along, and the quintet make their way to the idyllic village that is the home of the Harga people and their unusual traditions.

Ostensibly, the reason this place was chosen was because Josh is writing his thesis on midsommar or summer solstice traditions in Europe. Pelle's unique connection to the place where this particular festival is taking place seems purely coincidental, but it isn't long before the audience is clued in that something isn't quite right.

All the while, the strained relationship between Dani and Christian is circling the drain, but now, trapped together in this beautiful wilderness for the next nine days, we have no choice but to watch it implode in slow motion. Everyone doing their best to be who they think they need to be for everyone else, all the while, the lack of commitment to the act of loving and to one another begins to break down even as the world they find themselves a part of now seems to be going crazy.

None of what I've described so far sounds like a horror film, and that's intentional, because it's not really the horror parts of the story that make it interesting. If you've seen any kind of folk horror, but specifically Robin Hardy's The Wicker Man, you kind of know where this is going. Outsiders lured into an isolated community with odd, occasionally murderous intentions find themselves attempting to suss out a mystery before they find themselves to be the next victims. It's exactly what you think it is, and that's perfectly okay.

For fans of the subgenre, there's not a whole lot in the plot that is surprising. We're pretty sure that not everyone (maybe no one) is going to get out of this thing alive, but what makes Midsommar worth the effort is that nothing happens exactly when or how you expect it to, thanks to Aster's fondness for the short sharp shock as a pacing device.

The first great scene of horror action is not really horror at all, it comes at the end of the first day's ritual in which village elders perform an extended ritual that marks their transition from one state of being to the next. We spend a good ten minutes with both our own surrogates (the American friends) and these elders passively witnessing what appears to be an age old tradition. Toward the end of that ten minutes, the entire village moves to an ominous looking cliff, where the ritual continues in what seems like slow motion for another few minutes until, with plenty of warning, it ends with a spectacularly gruesome banality.

This is the world Midsommar has built, a world in which ritual and tradition forged over centuries shocks outsiders, but comforts those immersed within it. There are clues all over the place as to the nature of the Midsommar festival, honestly, it'd take an idiot not to at least ask a few questions, but the reality is still surprising to our friends. They are all so wrapped up in their own bullshit - Josh's thesis, Christian & Dani's dying romance, Mark's horniness - that they can't see the forest for the magical dancing trees. It's actually a lot of fun to be just a small step ahead of our protagonists, wondering not exactly what's going to happen next - because it's all right in front of us - but how it will play out.

With Aster's previous film, Hereditary, there was a tragic death that catapulted the family into turmoil. However, since we were stuck with that family to navigate their own grief, guilt, and anger, there was no room for levity, which was one thing that make the film's eventual supernatural turn so unsatisfactory for many viewers. I was a big fan of the mechanism, but much of the melodrama came across as funny to a certain audience, leaving the film as one of those that splits critics and audiences right down the middle.

Midsommar, on the other hand, is frequently and deliberately hilarious. The fact that we have two groups of people, insiders and outsiders, means that we are allowed to have a bird's eye view of some of these traditions that seem archaic and quaint, but really have a more nefarious purpose. The film is all about perspective. To that end, we have Will Poulter's Mark to sort of guide us through the more ridiculous looking aspects of the rituals to remind us that the film knows what this looks like from the outside. It's not laughing at itself, but it is cleverly presenting an everyman's view on a complex situation.

As much as The Wicker Man, Midsommar owes a debt to films like Cannibal Holocaust or Colin Eggleston's Long Weekend. These outsiders are lured into a community that is not their own by the promise of personal success or frivolous amusement. They are tricked, to some degree, but they are also there by their own hubris, the idea that these are a people to be observed, almost like the primitives in Cannibal Holocaust, for their own satisfaction is one of their major missteps that leads to their destruction when the environment strikes back.

One thing Aster manages to do extremely well in the course of world building is to build empathy with the Harga. As we walk through their traditions with them, we begin to understand the deeper meaning behind what looks like savagery to an outsider. Yes, the rituals are shocking to an outsider, and they do often reek of self-preservation for this remote village, but the script helps us and the characters to understand and empathize, which is a huge step toward buying in to the madness.

From a technical standpoint, Midsommar is impeccably crafted. From the shimmering camerawork that manages to capture the crazy-making nature of the 24 hour day in Sweden, to the often disturbing score, the film looks and sounds amazing. The art direction and production design that went into creating this village is bursting with tiny details that will have audiences revisiting scenes over and over again looking for clues, and there are plenty there to find. The attention to every last little piece of the Harga village was astonishing, it made this place feel like home, even when the odd angles of the architecture can put you at an unease, it all seems to be to a purpose.

At two hours and twenty minutes or so, Midsommar could outstay its welcome to a lot of viewers. In my mind, though, the pieces that many might be tempted to trim - the lengthy rituals that seem to stretch on forever - are actually essential to developing a sense of who the Harga people are and the amount of respect they have for their traditions. It can be tough, and there are moments you kind of want Aster to get to the point, but I respect the way he's chosen to present this to his audience, though it may backfire with the less patient viewer.

A definite highlight of the film, Florence Pugh's explosive performance as Dani is exceptional in the same way that Toni Colette's was in Hereditary, even though it's pitched in a different direction. She's asked to express an incredible range of emotion in Midsommar, and she nails it at every turn, no matter how intense or ridiculous the situation. I'll admit I knew nothing about her before this film, but she's definitely on my radar now.

Not quite a revelation, Midsommar is still a damn good film. The familiarity of the plot elements keeps it from being great, but the way in which these elements are put into play and the more shocking moments are executed definitely puts it up there with the better horror films in recent years.