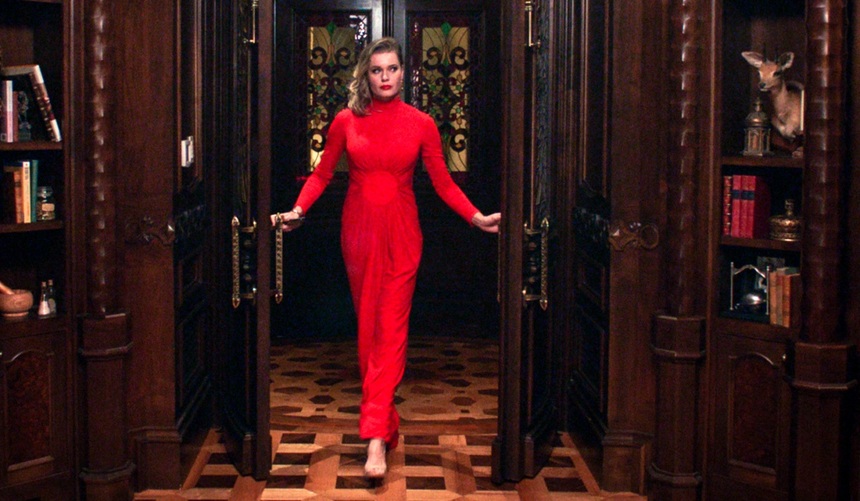 When gullible 22-year-old virgin (trust me, all of those descriptors play an important part in the film) Sam (Hayley Griffith) takes on a gig delivering pizzas to make ends meet, she quickly discovers that it's not going to be as easy as she'd anticipated. Her pizza joint gets a call from the bougiest part of town, and when no one else will take it, Sam steps up, hoping a big order will mean a big tip. However, instead of leaving with spending cash, she finds herself in the middle of a Satanic black mass meant to solidify the wealth of this community populated by old money aristocrats, led by the ultra prim Danica (Rebecca Romijn).

Short one virgin for their sacrifice to the lord of darkness, Danica and her coven of wealthy halfwits trap Sam to use as an offering. But she's squirrely, and goes on the run, meeting up with several useful insiders along the way, including Danica's recently deflowered daughter Judi (Ruby Modine, Happy Death Day), who's recent tryst with a neighborhood boy is the reason Sam is on the run. Shenanigans ensue, and it's up to Ruby and Sam to outrun and outwit the uber-wealthy devil worshipers, or end up as fodder for the slaughter in the name of continued wealth and unfettered opulence.

Now, before I get too much further into the film, it's worth noting that Satanic Panic, the debut feature from director Chelsea Stardust, was produced by the Fangoria Presents imprint, a kind of resurrection of the old Fangoria films that lined video store shelves starting back in the early '90s. Those films were largely filler for a voracious rental business that almost never made any kind of lasting impact with genre audiences. Satanic Panic fits right in with those mostly forgettable low budget features as yet another film that would've gone direct to video twenty years ago.

Boasting a "story by" credit from Mohawk co-writers Ted Geoghegan and Grady Hendrix and a screenplay credit by the latter, I had moderately high hopes that this could be a clever take down of the "we sold our souls to the devil" satire. Brian Yuzna's Society tackled similar material back in the '80s and there have been numerous films suggesting a supernatural link between crossroads bargains and financial success, but this film is just so clunky and poorly executed, and it's hard to believe the two above mentioned talents had anything to do with the final product.

Shot in the mega-rich Highland Park area of Dallas, Satanic Panic has no problems with its production design. The area is know for vulgar displays of wealth, and a quick drive down any of the streets in the township will have even the least materialistic amongst us into a minor fit of envy. So, the film does well in terms of production value. Locations are pristine, opulent, and exactly the kind of vomit inducingly sterile that a story about wealthy socialites clinging to their station requires. But it takes more than some pretty houses to make a compelling film.

Confusingly, no two actors in Satanic Panic seem to be aware that they are in the same movie. Performances are pitched all over the place from clueless (Sam), to super serious (Danica), to too-clever-for-her-own-good (Judi), and beyond. As a result, the tone fluctuates not only from scene to scene between over-the-top satire and serious supernatural horror, it even fluctuates within scenes from line to line as actors all seem to be in their own little movies, unaware of any connective tissue. It's wildly confusing, and doesn't come together with a cohesive tone at all.

There are some impressive practical and gore effects, but there are only so many bloody intestines a fan can take with such a shoddily composed narrative. The production appears to attempting to make up for the lack of cohesion with an overabundance of gross gore gags, and in the end it's too little too late. I love gore, I wallow in it, but when it comes out of left field and serves no purpose other than to shock, and doesn't even accomplish that, it's pointless.

It's not all doom and gloom for Satanic Panic, though. There's a clever concept in there, even if it is mangled in the execution, and a few of the performances are even entertaining. AJ Bowen turns in a quick cameo as a creepy lech attempting to weasel his way into Sam's pants at the beginning of the film, and Jerry O'Connell swings for the fences as Danica's disgraced husband in the best performance Satanic Panic has to offer. However, you'll notice that neither of those actors are anywhere near the top of the billing block, meaning that they account for only about ten minutes of total screen time, not a good sign.

Satanic Panic is at its best when it - and its actors - realize what a ridiculous film it is. Unfortunately for most of the cast and crew, only a few people on set got the memo, because the film is an unforgivable mess. With this, their second feature after the abysmal Puppet Master: The Littlest Reich, Fangoria is now 0 for 2, a depressing stat for those of us who were excited about the prospect of some good gooey horror. I still have hope for the future, but I am now severely lowering my expectations for any upcoming Fangoria features. Too bad, this concept had a lot of potential.