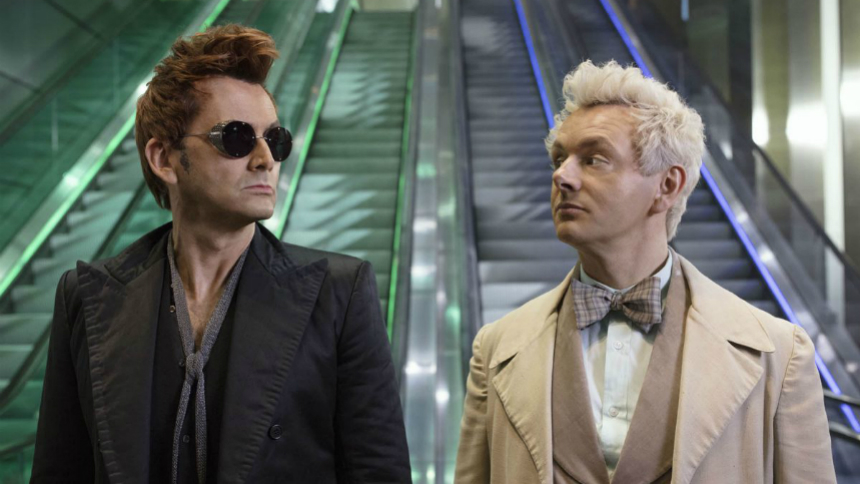 An angel and a demon fight in behalf of mankind, according to a new streaming series.

First published in 1990, the novel Good Omens: The Nice and Accurate Prophecies of Agnes Nutter, Witch by Neil Gaiman and Terry Pratchett revolves around an angel named Aziraphale and a demon known as Crowley as they endeavor to stop the End of the World.

An adaptation for the big screen was planned by eternal optimist Terry Gilliam sometime after the turn of the century. Pratchett passed away in 2015; the following year, Gaiman announced he was scripting a six-episode series for television, which got under way more fully in 2017.

Gleefully irreverent, the series is handsomely mounted, with flourishes of lovely visual effects and bursts of witty dialogue. As the goody-goody yet somewhat bumbling angel Aziraphale, Michael Shannon is splendidly delightful. As the demon Crowley, David Tennant takes great pleasure in being outlandishly fiendish.

Beyond those two central characters, individual episodes frequently run into trouble. For example, the very first episode spends an awful lot of time with a 'switching babies' routine that rambles onward and onward, amused with its own humor for reasons I could not discern. But Shannon and Tennant are clearly enjoying their characters and bring depth and, dare I say, humanity to their roles.

The series may have greatest appeal for those who love British comedy and also view religious and spiritual subjects with a jaundiced eye. It's most often a ridiculous comic fantasy, perhaps best devoured one episode at a time.

Do you feel this content is inappropriate or infringes upon your rights? Click here to report it, or see our DMCA policy.
AmazonAmazon PrimeDavid TennantMichael ShannonNeil GaimanTerry PratchettUK