Review: GODZILLA: KING OF THE MONSTERS, The Biggest Monster Bash of the Year 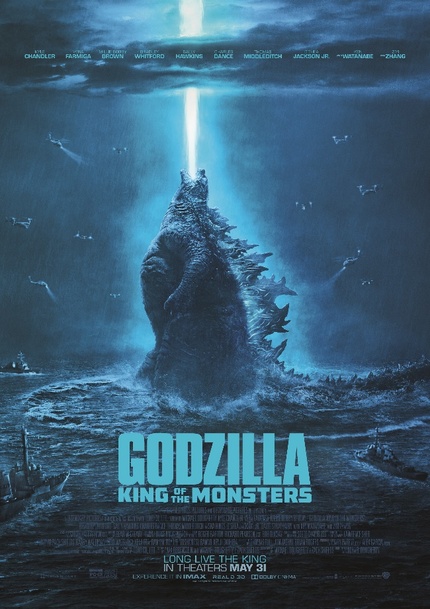 Very few franchises in the world have had the kind of staying power that Godzilla has. Rebooted, reimagined, reinterpreted on different continents and in different languages, Godzilla has long been one of Japan's most recognizable cultural exports over the course of sixty-five years and thirty-five films. The vast bulk of those films have been Japanese language films, but over the last twenty years, Hollywood has taken a couple of stabs at recreating Big G's impact to varying degrees of success.

In 1998, disaster specialist Roland Emmerich took the first stab at designing a Godzilla feature for American audiences. That film famously flopped after rejiggering a lot of the series' original ideas and making some crucial thematic mistakes. A lot of monster movie fans figured that was it, no more Big G in the U.S. of A., but then in 2014, we got another look at what an American Godzilla film could be with Gareth Edwards' (Monsters) Godzilla.

A significantly more accomplished feature, Edwards' vision of the monster film took the basics from Toho's original – ancient beast awakened by nuclear testing destroys major city – and created a big budget spectacle that, while not exactly a huge success, at least showed that an American Godzilla film wasn't a non-starter. It could be done.

The major issue many fans had with that version was that the Big Guy seemed like he was playing second fiddle in his own movie. Rather than focusing on giant monster action, the film played around with the characters back stories and seemed to spend more time with Godzilla's adversaries, the newly introduced MUTOs, than with our titular kaiju. As a result, the film wasn't exactly panned, but it was roundly criticized for misinterpreting what audiences look for in a Godzilla film. Producers Legendary Entertainment took note, and made sure that they'd not make that mistake again. And now we have Godzilla: King of the Monsters.

It is now five years after Godzilla and the MUTOs destroyed San Francisco and he's gone back into hiding, but the world's eyes are now open, and these monsters – referred to as Titans – are a reality that the new world must face. An organization called Monarch, introduced in the 2014 film, has taken on the job of monitoring and securing these seventeen Titans, all of whom are currently either in deep hibernation or, like Godzilla, in hiding. But not for long.

Led by Dr. Serizawa (Watanabe Ken), Dr. Vivienne Graham (Sally Hawkins), and Dr. Emma Russell (Vera Farmiga), Monarch is determined to keep tabs on these beasts, while the government fights to take control of the organization so they can have them destroyed. While this debate rages behind closed legislative doors, a new face appears, Col. Jonah Alan, a retired military officer turned eco-terrorist who traffics in Titan DNA to fund his army of mercenaries. He kidnaps Dr. Russell and her daughter, Madison (Millie Bobby Brown) and Russell's device, the Orca, designed to communicate with the Titans, and the soon the beasts begin to awaken with cataclysmic consequences.

This is where things start getting amazing.

First to awaken is the larval Titan, Mothra, an enormous moth-like creature, who escapes her hibernation spot and immediately cocoons beneath a waterfall in China. While Mothra does her thing, the mercenaries decide to head to Monarch's Antarctic Outpost 32 – shout out to horror nerds who oughta recognize that number from John Carpenter's The Thing – where one of the biggest, baddest Titans sleeps, the three-headed dragon known here as Monster Zero (and eventually called by his more recognizable honorific, King Ghidorah).

Once Ghidorah awakens, all hell breaks loose, as Godzilla resurfaces to battle the King for dominance and to attempt to take back his place as the king of the monsters. From there on out it's pretty much non-stop Titan-on-Titan mayhem as Godzilla, Ghidorah, and eventually the fire god Rodan, and Mothra battle it out for the survival of the world and every living organism on it.

I mentioned earlier that Legendary Entertainment must have taken noted after their first attempt received a lukewarm reception, and game plan for part two was to give the people what they want, and they do that in spades. Brought on to helm King of the Monsters is writer/director Mike Dougherty who directed both 2015's Krampus and 2007's Trick R' Treat, and also wrote big budget actioners like Superman Returns, and X2: X-Men United (the best of the original X-Men trilogy). With this sequel, Dougherty has made one of the most exciting, and strangely unique Godzilla features in many years. By focusing on the action, he gives the audience what they want, eschewing the traditional Japanese Godzilla structure, which has in recent years trended more toward satirizing bureaucracy.

In fact, it's almost a direct slam against Toho's most recent live action Shin Godzilla, which was about eighty percent boardroom meetings and twenty percent kaiju action. Even the recent anime feature trilogy focused far more on the strategy of defeating Godzilla that it did on action, which baffled me as it seems that if there's any go-for-broke medium for kaiju, it should be animation where budget is less of a constraint. Godzilla: King of the Monsters still features strategy sessions, and plenty of brainstorming, but never at the expense of inventive, massive action sequences.

While much of the principal cast of the first film is gone, it was nice to see Watanabe and Hawkins return for this second stab at a crowd pleaser. In addition to the above mentioned additions, King of the Monsters also brings on Kyle Chandler as Mark Russell, Emma's estranged husband and Madison's father, who is still reeling from the San Francisco attack that claimed their son, Zhang Ziyi and Bradley Whitford as Monarch team members, along with smaller parts for O'Shea Jackson and a badass Aisha Hinds as military officers determined to save the world.

What Dougherty does to change direction of the franchise is exactly the shot in the arm Godzilla needed after the unnecessarily dull first film. Having seen the relative success of Kong: Skull Island, which takes place in the same universe four decades earlier, and its big action set pieces, Dougherty and his co-writer Zach Shields (Krampus), managed to create a story that delivers some intense emotional beats among the Russell family, but also knows what put the butts in seats. Big freakin' monsters beating each other to a pulp.

There isn't a ton of plot to speak of once the above-mentioned developments take place, and all of the synopsized elements I mention take place within the first thirty minutes or so. For the last hour and a half we are either watching these glorious Titans fight, chasing them with the Monarch team, or devising ways to help and/or destroy them. There are several plot elements that appear that will be surprises to casual fans, but will definitely delight the kaiju aficionados in the audience. Lots of nods to the rich history of Godzilla and the other titans in the film, let us know that someone did their homework, and those touches will make old school fans smile. Everything from reimagined music cues to hints at Titan origin stories that aren't fully explored are neat little Easter Eggs for those in the know.

With a third film pitting Godzilla and Kong against one another already in post-production, Legendary took a huge gamble on this franchise, and they really hit the nail on the head with this one. Godzilla: King of the Monsters is the all out action bash of the summer, and it's going to be a tough one to beat for this kaiju fan. If this is the future of American Monster-verse movies, I say, let them fight!

Do you feel this content is inappropriate or infringes upon your rights? Click here to report it, or see our DMCA policy.
GodzillaKyle ChandlerMichael DoughertyMillie Bobby BrownUSVera Farmiga