Book Review: THE CASTLE ON SUNSET, How a Building Influenced a Culture

Author Shawn Levy peers into a mysterious, secretive place that still affects what we see today. 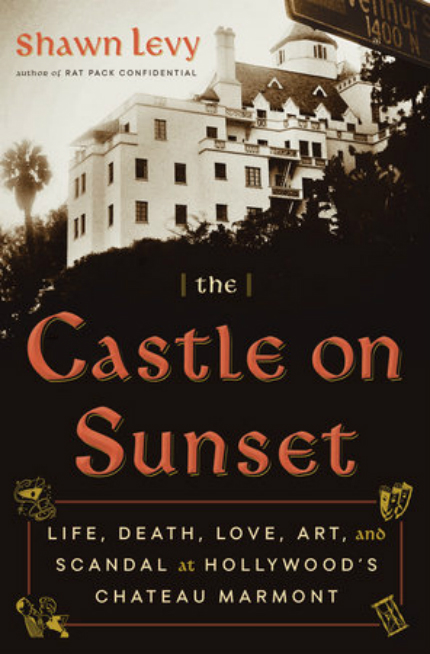 Some books are born movies, some achieve movie stardom, and some have movies thrust upon 'em.

Shawn Levy's The Castle on Sunset: Life, Death, Love, Art, and Scandal at Hollywood's Chateau Marmont avoids any loose paraphrases copping from Shakespeare's Twelfth Night (see mine above). Instead, his latest book is another absorbing account that is breezy yet substantial, entertaining yet sober-minded, judicious yet empathetic.

Levy's experience in writing for distinguished magazines (including American Film) and daily newspapers (notably as film critic for The Oregonian) informs his book-writing, in which he sometimes adapts his style somewhat in order to suit the subject. This is apparent in his very fair and eminently readable biographies of individuals, as in King of Comedy (Jerry Lewis) and Paul Newman: A Life, as well as his books about specific cultural scenes, as in Rat Pack Confidential (Sinatra and his pals) and Dolce Vita Confidential (mid-century Italian filmmakers).

Levy has a deft ability to weave together compelling stories that flow into a continuous river, composed of biographic information and a welcoming sense of time and place, even if the reader is only curious rather than fascinated by the subject.

Just hearing about The Castle on Sunset appealed to me personally, because I was born and raised in Los Angeles and I'd barely heard about the Chateau Marmont before I moved away in 1984 -- even though I'd passed by Chateau Marmont numerous times without realizing it!

The hotel became infamous in the 1980s as the place where John Belushi died of a drug overdose. More recently Lindsay Lohan made headlines for her extended stay at the fabled castle.

The book provides extensive context for the stories, digging into the whys and wherefores of the property in West Hollywood, California, and tying it all to a throughline that follows the most notable owners of the property. By "notable," I mean those who affected the hotel's reputation and its clientele, starting with efforts to make a success of an apartment building, which soon was transformed into a hotel and then began drawing the interest of people in Hollywood.

Again, it's all about the research and context, and Levy has clearly done his homework. More than that, he always has the reader in mind. Admittedly, I jumped through the book, looking for anecdotes about movies, but then I quickly settled down and started over again from page 1, which paints with Levy's particular and enjoyable brush. Anecdotes? Yes. Rumors? Acknowledged or dismissed. Business connections? Concisely explained. Hotel guests? Their careers are placed into historical context as well.

Reading the book makes for a marvelously jaunty experience. In effect, it allows the reader to sample decades of their choosing during the 20th century and beyond, and then relax with an expert who is neither harsh nor judgmental about the exploits that he recounts, albeit sometimes with an arched eyebrow, I imagine (?!). Knowing that the hotel has had its ups and downs over the decades, Levy avoids artificial suspense -- spoiler! It's still here -- while making the reader what to learn what exactly happened and why.

What, though, is the book's connection with the movies themselves, sufficient to the point that it intersects with our site's primary focus? More on that later.

For now, please take this as my highest recommendation of The Castle on Sunset as a book that will make you think about the past and your own future in it. And enjoy tasty tidbits about the lives of the rich and famous, and the movies they made and that were influenced by their time at a hotel that is very much alive and well.

Do you feel this content is inappropriate or infringes upon your rights? Click here to report it, or see our DMCA policy.
bookChateau MarmontDoubledayHollywoodShawn LevyThe Castle on Sunset