I confess: I do not have total recall.

Last week, I read our own Michele "Izzy" Galgana's excellent review of Hagazussa: A Heathen's Curse. To quote just part of it:

"Hagazussa is one of those films that's hard to review; again, with nearly no dialogue and traditional plot structure, we are left in an abstract void as the terrors before us unfold. And these terrors are visceral and unforgiving. It's a hard watch, but for those who seek out films that hurt, you won't be disappointed. The film is photographed beautifully; many scenes feel like an oil painting of the Dark Ages come to life. While many scenes are mortifying, there's much beauty to behold in these little deaths."

Then I unwrapped a new Blu-ray of the film from Doppelganger Releasing and started watching. Very quickly, I was enraptured by the serene beauty of the images. Even on my comfortably-sized 32-inch monitor, the tranquil, mountainous wonders slowly worked their wonders on me, via the lovely Blu-ray.

And then I realized that I had indeed seen the film before, via a digital screener made available to members of the press before Fantastic Fest 2017. But I kept watching, which is a testament to the high quality of the Blu-ray, yes, yet more importantly to the mysterious story that is told by writer and director Lukas Feigelfeld, which I did not fully appreciate or understand during my first viewing. 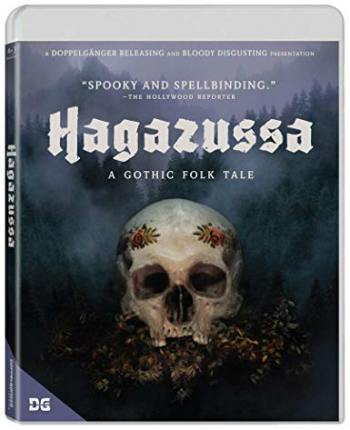 On my second viewing on Blu-ray, with an understanding that the film is less interested in narrative, per se, than in the power of images to convey ideas, I was better prepared. (Also, strong coffee helped.) Yet I still couldn't quite figure out the story and those character changes. (Coffee really doesn't help, when you yourself are limited in imagination and perception, sometimes.)

For myself, everything finally clicked into place when I watched two special features on the Blu-ray. First came Interferenz, a short film that Feigelfeld wrote and directed. In its 48 minutes or so, it establishes the director's preference for a slow-moving pace and an oblique story that fairly demands the viewer's full concentration, as a worker at a strange factory or planet discovers that something is amiss, even as he deals with resurgent memories of his wife.

Then I watched "Select Scenes Director Commentary," in which Feigelfeld comments (in English) on four or five scenes, lasting 34 minutes in all, and explains some of the plot points that I had completely missed in my two previous viewings. He also provides audio commentary for a single "Deleted Scene," and explains why the scene was deleted. The Blu-ray also includes a music video by MMMD, the group that composed the film's haunting music.

The film itelf is available to rent or purchase via various VOD platforms. The Blu-ray is also now available and is an essential purchase for anyone who has a taste for slow-burning horror films that are more about disquieting atmospheres than cheap jump scares. Settle back and be ready to have nightmares forever.

Do you feel this content is inappropriate or infringes upon your rights? Click here to report it, or see our DMCA policy.
AustriaDoppelganger ReleasingLukas FeigelfeldMusic Box Films

More about Hagazussa: A Heathen's Curse