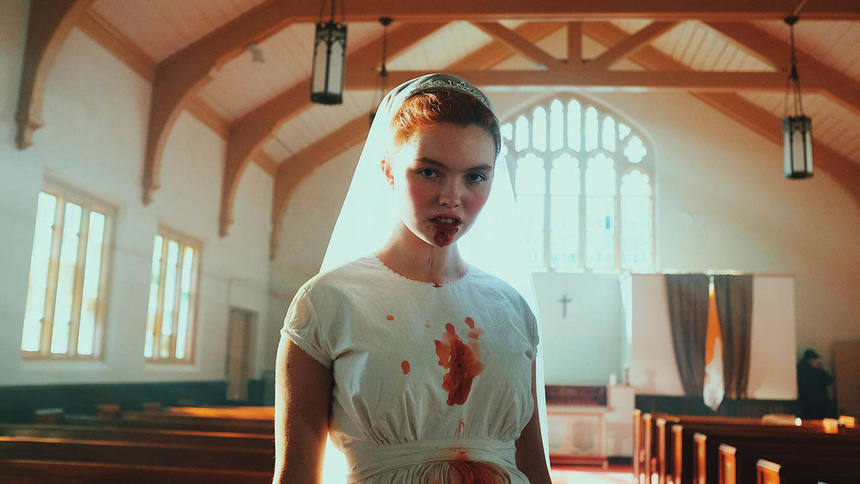 With SXSW now in full swing, it's about time that some of the hotly anticipated features start to share teases to whet the appetites of filmgoers. One of my must-see films this year is Pollyanna McIntosh's directorial debut, Darlin'. A sequel to Lucky McKee's The Woman and the third part of a series based on a Jack Ketchum novel that began with The Offspring, Darlin' partially follows the further adventures of McIntosh's title character from the former and picks up a new character in Darlin'.

The PR describes the film thusly:

Found at a Catholic hospital filthy and ferocious, feral teenager Darlin' (Lauryn Canny) is whisked off to a care home run by The Bishop (Brian Batt of Mad Men) and his obedient nuns where she is to be tamed into a "good girl." However, Darlin' holds a secret darker than the "sins" she is threatened with, and she is not traveling alone. The Woman (Pollyanna McIntosh of The Walking Dead), equally fierce and feral, who raised her is ever present and is determined to come for her no matter who tries to step in her way.

Continuing the twistedly vicious adventure of Lucky McKee's cult hit The Woman, DARLIN' sees standout star Pollyanna McIntosh both in front of and behind the camera, expertly commanding an all-consuming feast on the senses and sensibility in equal measure.

I loved The Woman and reviewed it back when it played at Texas Frightmare Weekend all those years ago, so I'm excited to see where this new adventure takes us. The teaser below is brief, but I'm hopeful that this tale of a girl gone very, very bad lives up to its predecessor's reputation.

Darlin' has its world premiere at SXSW tomorrow, March 9th, and 11:30 PM in Austin.