70s Rewind: THE PANIC IN NEEDLE PARK And The Damage Done 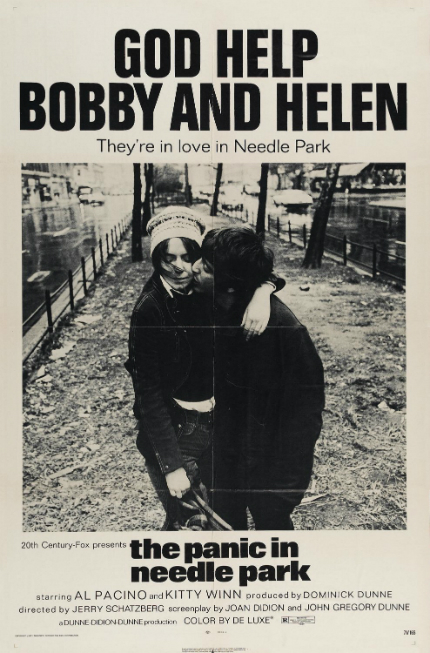 "Romeo and Juliet on Junk" is how the script was pitched to Hollywood studio executives.

As recalled by Joan Didion in an interview included on a limited edition Blu-ray distributed by Twilight Time (available here, as of this writing), a paperback copy of James Mills' novel The Panic in Needle Park caught her eye. She recognized Mills' name as a journalist for the famed Life magazine, bought the book, and thought it would make a good movie.

By that time, Didion and her husband, John Gregory Dunne, were both seasoned journalists and book writers; Dunne had recently published The Studio, his nonfiction account of a year in the life of 20th Century Fox. Dunne's older brother Dominick Dunne was an experienced producer; the three of them decided to pool their money, buy the screen rights to the book, and write a screenplay.

Didion says they didn't have any clear idea how to do that, but they completed it and began submitting it to studios in Hollywood. Joseph E. Levine of Avco Embassy Pictures bought the script first, but then decided not to make it, and it ended up at 20th Century Fox. (Yes, the studio that John Gregory Dunne had written about extensively in his book.)

In search of a director, the script came to professional photographer Jerry Schatzberg, who was finishing up his first feature film/passion project, Puzzle of a Downfall Child (about a stressed-out fashion model, played by Faye Dunaway). Schatzberg read the script and rejected it quickly, but reconsidered after his own dramatic film was completed and his agent told him that Al Pacino was attached.

Schatzberg, in a separate interview included on the Twilight Time Blu-ray -- which includes an isolated track featuring the musical score by Ned Rorem that Schatzberg ultimately decided not to use -- says that he had seen Pacino on the New York stage some time before and was tremendously impressed. He felt Pacino was perfect for the role, though Schatzberg had to audition other actors (most notably, Robert De Niro) in order to appease the skittish 20th Century Fox. Kitty Winn, the other lead player, came to the film on the recommendation of producer Dominick Dunne, who had seen her on the stage in San Francisco.

Set in and around Sherman Square on the Upper West Side in Manhattan, known as "Needle Park" because heroin addicts favored the tiny area as a hang-out spot, amidst constantly buzzing pedestrian and automotive traffic, the film quickly introduces Helen (Winn) as a young budding artist. She is sleeping in the apartment of established artist / occasional boyfriend Marco (Raul Julia), but has no hesitation about accompanying the charming drug dealer Bobby (Pacino) after Marco leaves town for a while.

Bobby and Helen soon fall into a relationship. Bobby is a small-time dealer, though he claims he doesn't use. That lie lasts about one night, though it's indicative of Bobby's self-deceit; he tells himself that he really doesn't have a problem, that he's not addicted to heroin, that he will soon be moving up in life. It takes Helen a little longer to be revealed as an addict herself. She too lies to herself, imagining that she doesn't have a problem, and that she can quit if she wants to do so, and that there are other things she wants to do in life.

Really, though, they are both in love with the needle and the profound, numbing high the drug produces, which they can enjoy for a time that is all too brief. Really, it's all they live for, though they claim to be in love with each other. That, too, is a lie. 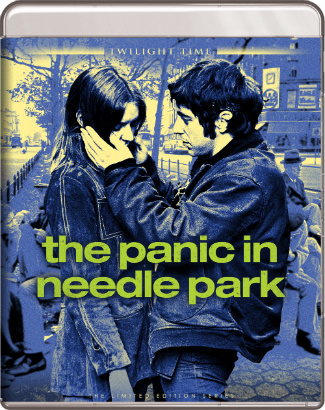 In his first starring screen role, Pacino is extraordinary; he's magnetic and persuasive and altogether convincing as an addict with delusions of an ordinary life. Winn's resignation and acceptance of her addiction is equally heartbreaking, more so because she has fewer options as a woman, along with no clear pathway to emerge from a toxic environment that is leading them both to ruin.

Richard Bright, who would team up again with Pacino in The Godfather movies, here plays a more prominent supporting role as Bobby's older brother Hank, someone who was, at one time, brighter and with greater potential than his kid brother; he too has fallen under the spell of heroin and proves unable to help anyone but himself.

Alan Vint plays Detective Hotch of the Narcotics Squad; he's a specter of doom for Bobby and Helen. Other faces in small roles that later became better-known include Kiel Martin, Joe Santos and Paul Sorvino.

Cinematographer Adam Holender explains his approach to the film, and how it was shot on location on a small budget, in an interview included on the Blu-ray. He and Schatzberg had previously worked together on Puzzle of a Downfall Child, and Holender was just coming off shooting Midnight Cowboy. As an immigrant from Poland, he fell in love with New York City during the mid-60s and explains how he tried to capture his feelings through his photography.

As a favor, Schatzberg allowed his friend Francis Ford Coppola to show reluctant execs at Paramount Picture extended footage from Panic, which convinced them that Pacino could handle the role of Michael Corleone in The Godfather. Winn soon appeared in The Exorcist, followed by a sequel and multiple roles on TV until 1984.

Joan Didion credits the industry recognition of Panic for opening a door into Hollywood for herself and her husband; they soon were scripting Play It As It Lays (based on her own novel) and A Star Is Born. Novelist James Mills went on to write Report to the Commissioner, which became a tense and terrific motion picture drama the following year (read more about the film here.)

Sometimes harrowing, sometimes sobering, sometimes tragic, The Panic in Needle Park is never sentimental. It records a short time in the lives of addicts that never reaches resolution, although the conclusion is never truly in doubt. The neighborhood changed, and the addicts moved elsewhere. After I moved to Brooklyn in 1984, I visited Sherman Square and the nearby neighborhoods in Manhattan on countless occasions, never realizing that I was spending time in the former "Needle Park."

Admittedly, I have enjoyed a sheltered, protected lifestyle to a great extent, and have rarely been tempted by the lure of drugs. Watching the film now, decades after its release, and knowing that addiction worldwide has increased at an alarming rate, I can only wonder what forces could ever make it stop, or even slow down.