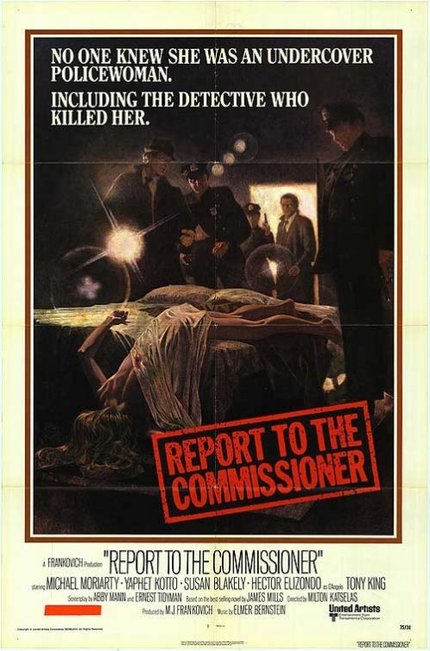 Inspired by posters for the film adaptation, which featured a naked dead woman on a bed, draped strategically in a sheet and surrounded by cops, I wanted to read the book, at least, since I'd missed seeing the movie when it opened in theaters in February 1975. My lustful, early teenage instincts -- look! a naked woman! -- were quickly squashed when I realized the book told its story in a style that made it read like an actual, well, report to the New York City Police Commissioner.

Mills was a journalist who had written two previous books, the drug novel The Panic in Needle Park, also made into a movie, and the non-fiction account The Prosecutor. First published in 1972, Report to the Commissioner starts with the murder of an undercover police officer, and then digs into the key characters who surrounded her in the narcotics unit, as well as the detective who was charged with killing her, and the supervisors of both.

Told in epistolary style, like Stephen King's Carrie, which was my comparison point at the time, Mills unfurls a series of documents that large consist of interviews with the key players, conducted by an Internal Affairs officer, along with a lengthy, unpublished magazine article that profiled the undercover cop. The dialogue crackles with authenticity; the story quickly becomes gripping, the kind of page-turner that keeps me up past my bedtime.

The superb script, credited to Abby Mann (a veteran scribe who had recently co-written the excellent The Marcus-Nelson Murders for television) and Ernest Tidyman (whose credits included Shaft, The French Connection, and High Plains Drifter), is a model of adapting books to the screen. The shape of the story and much of the dialogue sounds very similar to Mills' novel, though the characterizations are shorn to the bone. The screenplay also makes it possible for several sequences to be dramatized in a fashion that lends itself to the big screen. 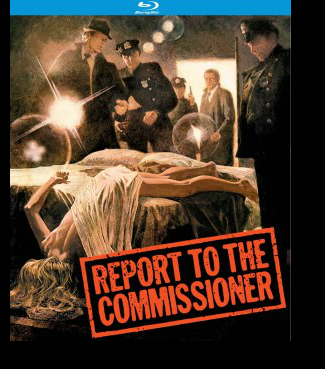 Milton Katselas began his career by studying with famed acting coach Lee Strasberg and then serving as an apprentice to director Elia Kazan. He produced several theatrical productions during the 1960s, including Butterflies Are Free. He made his feature directing debut with the 1972 film adaptation, starring Goldie Hawn and Edward Albert; Eileen Heckart won an Academy Award for her supporting performance.

He followed that comic drama with the romantic comedy 40 Carats, another stage adaptation, this one starring Liv Ullmann, Edward Albert, and Gene Kelly. In that context, the idea of him directing a tense police drama sounds quite startling.

The connective tissue appears to have been M.J. Frankovich, who produced both Butterflies Are Free and 40 Carats (and a slew of other films too). Presumably, he knew that Katselas was very good at capturing good performances, could stick within a budget, and would not be intimidated by the prospect of filming on location in Manhattan. Or maybe Katselas pushed for that?

Though it was not filmed entirely in the city, the location shooting glories in the crowded streets of midtown Manhattan. Cinematographer Mario Tosi had already shot The Marcus-Nelson Murders; he also had experience in filming documentaries and low-budget features, like Buster and Billie and Curtis Harrington's The Killing Kind.

Film editor David Blewitt worked with Katselas previously on Butterflies Are Free and 40 Carats. Casting director Joyce Selznick already had worked on The Laughing Policeman and The Longest Yard, so she certainly contributed on the creative side of the filmmaking team.

The story, and the righteous anger that powers it, and the outrage that accompanies how it all turns out, are very strong. These elements contribute mightily to an atmosphere whose tone is dominated by fierce performances, especially by Moriarty. Before this film, he was probably best known for Beat the Drum Slowly, in which he played a kind-hearted, star baseball player opposite Robert De Niro as a lesser athlete with a terminal disease. De Niro shined in that picture, but he wouldn't have done so if he didn't have Moriarty to play against.

Detective Bo Lockley is introduced at a high point of anxiety, and then we observe Moriarty's fine work in building the character throughout the film, as the kindly officer cooks in his own juices until he's ready to explode. As his partner, Crunch Blackstone, Kotto turns in a great characterization of his own, a man at war with criminals in his precinct, most of whom happen to be the same race as him. Hector Elizondo plays police Captain D'Angelo with less obvious nefarious instincts than his outright criminal character in the previous year's The Taking of Pelham One Two Three, but is equally as convincing.

Bob Balaban turns up in a surprising role as a disabled man who moves through Times Square perched on a cart, while Richard Gere makes a notable debut as a smooth-talking pimp. Other welcome cast members include Tony King, Michael McGuire, Dana Elcar, Stephen Elliott, Vic Tayback, and William Devane, all familiar faces for fans of 70s cinema.

Susan Blakely is terrific as the undercover narcotics agent with a bullet in her future. She is pretty much exactly as described by Mills in his novel, an eye-catching beauty who has a surprising, adept ability to convince people that she's a runaway teenage junkie.

I first saw her as Richard Chamberlain's wife in The Towering Inferno, a rather thankless role. Though I missed this film and her follow up, Steve Carver's Capone, in theaters, I became a devoted fan when she starred in the TV miniseries Rich Man, Poor Man, standing tall above costars Peter Strauss and Nick Nolte. Her career was mostly confined to the small screen starting in the 1980s, but she has always stood out for me, not simply because of her looks, but because she brings a sense of grounded reality to her roles.

Moriarty would later star in Who'll Stop the Rain (outshining Nick Nolte!), Larry Cohen's Q and The Stuff, Clint Eastwood's Pale Rider, and on and on. Kotto continued on his very successful career, playing characters with fire and ice, while Elizondo continuing working in a huge variety of supporting roles, always bringing life and vitality to what he did.

Director Katselas moved on to When You Comin' Back, Red Ryder?, a stage adaptation that I've never been able to see and then helmed a couple of TV movies. Thereafter he appeared to focus on his work as owner and head acting teacher of The Beverly Hills Playhouse, where his students reportedly included George Clooney, Alec Baldwin, Tom Selleck and Michelle Pfeiffer.

Summing up: A blistering, nuanced police drama that remains gripping throughout, Report to the Commissioner features absolutely terrific performances. The recent Blu-ray, available from Kino Lorber is a bare-bones disc, save for the trailer, but looks great. Highly recommended. 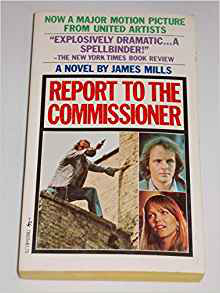 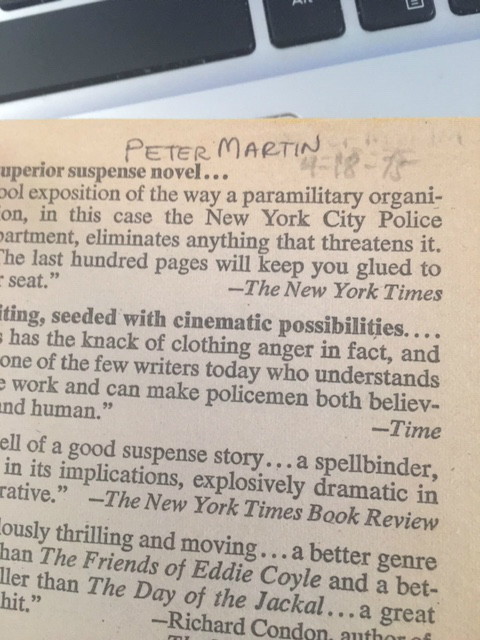 Do you feel this content is inappropriate or infringes upon your rights? Click here to report it, or see our DMCA policy.
70s RewindHector ElizondoMichael MoriartyMilton KatselasSusan BlakelyYaphet Kotto